Fans of the the cult favorite TV show Mystery Science Theater 3000 were justifiably upset when it was canceled back in 1999. But now they can rejoice as Netflix has revived the quirky, sci-fi satire for an eleventh season with fourteen new episodes that just started airing.

Mystery Science Theater 3000 (or MST3K) is one of those shows that cannot simply go quietly into the land of cancellation. Ever since it debut on a local TV station, KTMA, back in the late ’80s, the comedy has bounced around Comedy Central then the Sci-Fi Channel until it finally went dark. But its creator Joel Hodgson (who played the lead character Joel in the early seasons) would not let the show be forgotten and tried to revive it. He championed the show over the years and started a successful Kickstarter campaign that raised over $5 million to fund a revival. The result was that new episodes were produced in 2016 and are now available for hungry fans and those curious enough to see what the hoopla is about. 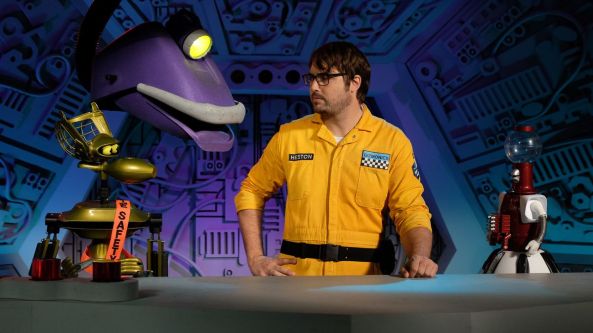 The new MST3K follows the same basic format of the old shows. An average Joe-character (this time it’s Jonah Heston played by Jonah Ray) is trapped in a spaceship by a mad scientist who wants to experiment on him by making him watch really bad genre films. What keeps Jonah Heston from going insane is that he has a group of wise-cracking robots who watch the films with him and together they heckle the films to shreds. As we watch the bad films we see the silhouettes of Jonah and the robots sitting in the front row on the bottom of the screen and we get to hear all their putdowns and puns.

Mystery Science Theater 3000 is one of those shows that is best enjoyed if you can appreciate the fact that it’s actually a celebration of the cheesy side of sci-fi, horror and fantasy. The jokes and commentary are non-stop; some hit, some miss. With that rapid pace, many jokes are topical or may go over the heads of some viewers, but that is part of the fun. Sure, some jokes may become dated (as seen in older episodes), but that’s the way it is.

The show follows the tradition of the previous incarnations in that it uses distinctly below average production values with sets and model effects that are clearly fake. But that is part of its charm and how it tributes the films Jonah and his robot friends make fun of. The only difference is that the villains in this version of MST3K are played by more recognizable actors. Felicia Day as Kinga Forrester (the daughter of the older show’s head villain) and the great Patton Oswalt as Max or TV’s son of TV’s Frank are terrific in their roles. You can tell they’re having a great time playing evildoers, and they have lots of fun torturing poor Jonah Heston. In fact, the ultimate torture for Jonah is that Kinga Forrester tries to force him to marry her in one episode.

Of course, the big draw of Mystery Science Theater 3000 are the films themselves. And boy did they pick a bunch of stinkers who deserve the ribbing! The choices this time are mostly newer films that came from the ’60s, ’70s and ’80s like Starcrash, Reptillicus, Carnival Magic, Avalanche and those “classic” Dough McClure epics The Land That Time Forgot and At The Earth’s Core. MST3K must be Edgar Rice Burroughs’ method of getting the last laugh on the last two films that adapted his works! And let me add that the choice of these films makes me feel old because I remember watching a couple of them in theaters back in the day.

The only thing lacking with the new episodes is that the original main heroes (Joel Robinson and Mike Nelson) are absent. But the new MST3K does feature guest appearances by former baddies like Pearl Forrester, Bobo and Observer. Of course, the robots and co-stars from the older episodes, Gypsy, Cambot, Crow and Tom Servo, are co-stars in the revival and pick up right when we last saw them in 1999. 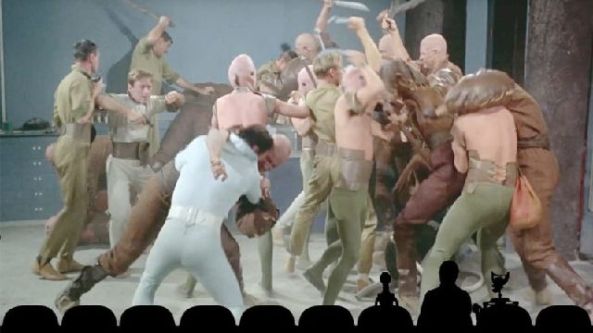 Even though Mystery Science Theater 3000 has been gone for a good while, it’s fantastic that it has been able to pick up where it last left off and continue delivering the laughs. Now if you’ll excuse me, I have to finish watching their skewering of At The Earth’s Core, a guilty pleasure of mine.