The 40th anniversary of Star Wars is upon us! It is hard to believe that a quirky sci-fi film that went on the change our cultural and celluloid landscape is 40 years old. In that time, Star Wars and all the films and TV shows that followed, boasted many important and awe-inspiring moments that continue to resonate with fans throughout our planet. As we celebrate Star Wars’ 40th anniversary let’s look at the series’ greatest moments.

40. Rey Claims The Lightsaber From Kylo Ren (Star Wars Episode VII: The Force Awakens): Nobody was sure about who was the main hero in the new Star Wars Sequel Trilogy. That mystery was solved beyond a doubt when Rey used the Force to claim Luke Skywalker’s lightsaber and battle Kylo Ren. Her eventual victory  cemented the fact that she is the best hope for the galaxy. 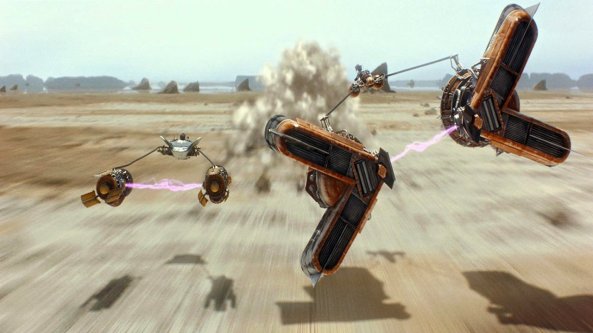 39. The Pod Race (Star Wars Episode I: The Phantom Menace): As flawed as the first Star Wars prequel was, the exciting and breakneck pod race on Tatooine with all the weird pilots and their distinctive pod vehicles was one of that film’s best moments. 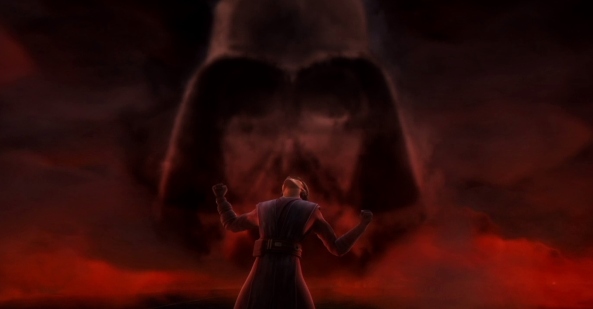 38. Anakin’s Spiritual Journey on Mortis (Star Wars: The Clone Wars “Ghosts of Mortis”):  On a distant world, Anakin Skywalker became corrupted by the dark side of the Force after encountering spiritual embodiments of the Force. Terrifying visions of his rise to Darth Vader highlighted this powerful story arc that better explored his fall from grace than the prequel films.

37. “These Aren’t the Droids You’re Looking For” (Star Wars Episode IV: A New Hope): Forget using the Force to do super acrobatics, wield lightsabers and levitate objects. When Ben Kenobi used a Jedi mind trick against stormtroopers interested in Luke Skywalker’s wanted droids, that scene displayed one of the most powerful aspects of the Force. Honorable mention goes to the bar scene in Episode II where a younger Kenobi tells a drug dealer to go home and rethink his life.

36. Darth Maul’s Final Duel (Star Wars Rebels “Twin Suns”): Darth Maul finally finds his ancient enemy Obi-Wan Kenobi in exile on Tatooine. The older Jedi isn’t interested in fighting Maul until the former Sith apprentice deduces that Kenobi is protecting someone (Luke Skywalker). The resulting lightsaber duel is brutally short and to the point with Maul quickly killed. It may have disappointed those waiting for a drawn-out sword fight, but the scene demonstrated that Kenobi was indeed a master. Plus, it cast Maul in a sympathetic light as he seemed to see the error of his ways in his last breath.

35. Ahsoka Tano Vs. Darth Vader (Star Wars Rebels “Twilight of the Apprentice”): Ever since Anakin’s apprentice Ahsoka left the Jedi Order near the end of The Clone Wars series and reappeared during Star Wars Rebels, fans have wondered how she would react to seeing her former master as a Sith. We got our answer in the second season finale where she faced off against Darth Vader and proved she was his equal.  What was more engaging than the duel was her coming to terms with her former master’s fall.

34. The Battle of Geonosis (Star Wars Episode II: Attack of the Clones): A Jedi force set out to rescue Anakin, Obi-Wan and Senator Padme Amidala from Separatist forces, but they weren’t enough. Enter the new clone army led by Jedi Master Yoda and before you know we witnessed a full-scale and chaotic ground war between clone troopers and droid soldiers. Seeing all the intense blaster fire and wild looking vehicles of all shapes and sizes engaged in battle was a spectacle and for Star Wars that is saying a lot. 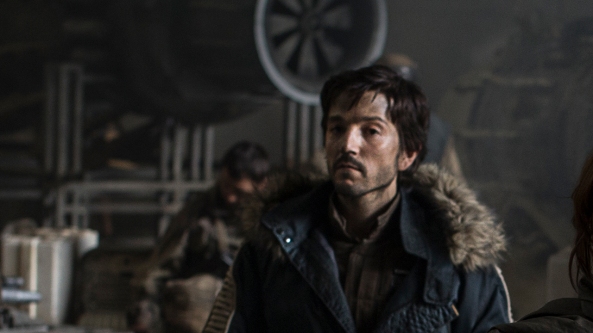 33. Cassian Andor Murders an Informant (Rogue One: A Star Wars Story): It was a small scene in the first live-action Star Wars spinoff film. Cassian Andor gets vital intel from a Rebel spy who cannot keep up with him as stormtroopers close in on them. Instead of helping his comrade Andor unexpectedly kills him. This cold-blooded act drove home the point that Rogue One was a decidedly dark film that took risks by showcasing this morally gray character who goes to extremes for the Rebellion.

32. Anakin Pursues Obi-Wan’s Killer (Star Wars: The Clone Wars “Friends and Enemies”): One of the best arcs in the animated series featured Obi-Wan Kenobi faking his death and going undercover with bounty hunters. Anakin, believing his master to be dead, relentlessly pursues Obi-Wan’s killer, who is actually Obi-Wan in disguise. This development was an undeniable a high spot in this tense and captivating story arc.

31. The Grand Army of the Republic Sets Out For War (Star Wars Episode II: Attack of the Clones): Following the climactic Battle of Geonosis in the film, the Galactic Republic unveils its mighty clone army to counter the Separatist threat. With much fanfare marching legions of white armored troops leave Coruscant in giant ships to engage the Separatist droid armies. While many celebrated this moment, others (and we) knew better than to hail these troopers because they foreshadowed the coming of the evil Empire. END_OF_DOCUMENT_TOKEN_TO_BE_REPLACED