The Marvel Studios mini-series event The Defenders just premiered on Netflix and is the culmination of the past four Netflix/Marvel superhero streaming shows Daredevil, Jessica Jones, Luke Cage and Iron Fist. The Defenders finally brings the main leads from those shows together at last like in The Avengers, which what fans have been waiting for ever since the superhero shows were announced years ago. Needless to say this is a big deal for fans of the shows for obvious reasons.

Running only eight episodes, The Defenders stars Charlie Cox as Matt Murdock/Daredevil, Krysten Ritter as Jessica Jones, Mike Colter as Luke Cage and Finn Jones as Danny Rand/Iron Fist along with the supporting actors from their respective shows and Sigourney Weaver as Alexandra, the show’s main villain. The Defenders does not take long to get into the action and meat of the story. It starts with all four heroes separately running afoul of the mysterious Alexandra and by the third episode they all meet in the heat of battle and the story just moves along from there. As expected with these Marvel Comics stories, the four don’t exactly get along at first, which is best shown with Rand actually hurting the invulnerable Cage with his Iron Fist. But all ends well as they put aside their differences to face their mutual foes.

In their separate investigations, they learn  that the shadowy criminal organization, The Hand, who have appeared in Daredevil and Iron Fist, are making an ominous move in New York City. In a nutshell without giving too much away, the leaders of the Hand, which includes Alexandra, are carrying out an operation that will wind up destroying the city and it’s up to our heroes to stop them. 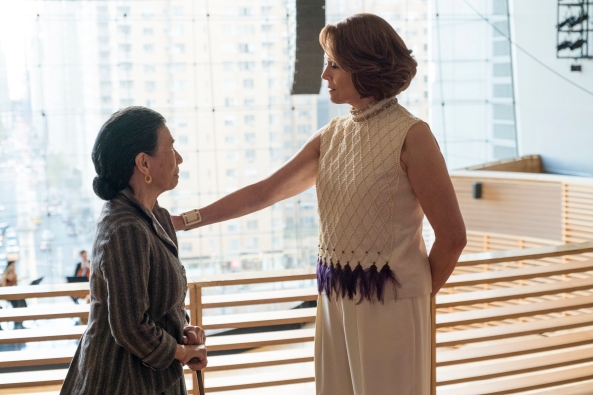 Overall, The Defenders is an enjoyable and brisk-moving mini-series that should delight fans and casual viewers. All the actors bring their A game to the show with the standouts being Cox and his own show’s cast. Fans of the shows should be pleased that all the characters are faithfully presented. Matt Murdock carries the weight of the world on his shoulders, Jessica Jones drinks whenever she can, Luke Cage stands around and gets shot at without any injury and Danny Rand finds any opportunity to say “I am the Immortal Iron Fist!”

Despite all the complaints about Jones and his show, his character here is much better portrayed and less insufferable. Fortunately, Jones proves that he can bring something to the role and Iron Fist’s appearance here presents the case that the faults with the Iron Fist TV show were due to those showrunners, not the character or actor. For example, Jones seems more at ease during his fight scenes, a critical flaw with Iron Fist, and on the whole, the fight choreography was crisp and full of power. The standout fight scene was probably in the third episode when the four Defenders finally all meet each other, but the others spread out in the other episodes are fun to watch and grab your attention, though at times they are too dark and it is clear that some of the actors seem more natural at fighting than others. That criticism does not apply to Jones, believe it or not.

The villains are another quibble with The Defenders. Unlike The Avengers which had the breakout villain, Loki, the villains in this show are not particularly compelling. Basically, they are just a bunch of super ninjas and though that is appropriate for the power levels of the Defenders, they could have been more threatening or had more clear motives. Another gripe about the show and the villains has to do with the fact that the show takes place in the Marvel Cinematic Universe (MCU).  It is not the fault of the show, but it is annoying that with the severity of the threat to the city, no one has the notion to try to contact the Avengers or even Dr. Strange given the supernatural aspect of the Hand. We don’t even see the Avengers Tower in the New York skyline, whereas in Spider-Man: Homecoming that film took every opportunity to show the tower whenever there was a shot of the city. Then there is the reaction of some of the characters to what is going on; basically they have a hard time believing in the Hand and their threat, and even the nature of the leads’ powers. This goes for especially Luke Cage, who cannot accept that Danny Rand spent time in another realm and became a mystical warrior. That is a strange reaction for an inhabitant of the MCU that has seen open alien invasions and big league superhuman battles. Let’s not forget that Cage himself has superhuman powers. For these reasons it is hard to accept that The Defenders takes place in the MCU. But that is something that fans have to ignore and just go with the story. 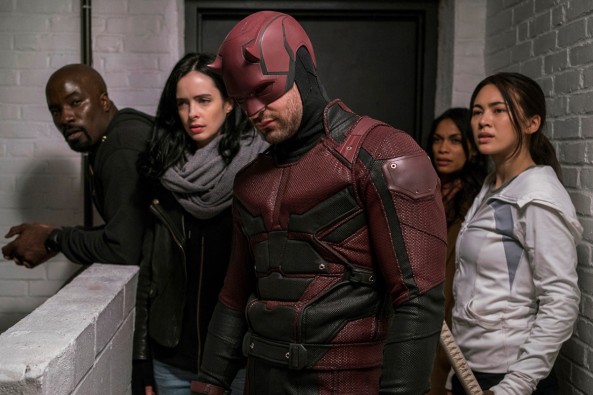 What ultimately makes The Defenders work is the camaraderie between the leads and seeing them all together. Thankfully, after taking time to introduce them individually in the first episode with interesting cinematography that presents each hero with a different color scheme, the show quickly has them teaming up and getting to the meat of the story. Their interactions were very amusing and some of the show’s best moments. They all had good chemistry and complemented each other well to the point we were sold that they came to care about one another. While The Defenders may not have the same thrilling impact and joy of The Avengers, it is quite enjoyable in its own right and helps set a path forward for the future of these grounded heroes.

3 comments on “The Defenders Come Together At Last”