The series is almost as beloved as the original Star Trek, but many overlook the fact that when it debuted thirty years ago in syndicated televisionit was dismissed automatically. Fans of the original show were understandably skeptical about Star Trek: The Next Generation ever since it was announced. After all, it did not feature Kirk, Spock, McCoy and the other beloved characters and the first promo images looked strange. A bald captain? Klingons are no longer the enemies of the Federation? Why did the new Enterprise look ungainly? What was the deal with those weird one-piece uniforms and lounge chairs on the Enterprise bridge? People wondered what the creator Gene Roddenberry must have been thinking when he developed the new Trek incarnation. Even Leonard Nimoy wondered if the show would succeed. Citing that it was impossible to catch lightning twice in a bottle, Nimoy turned down the offer to develop the show before Roddenberry was approached.

When it finally premiered in September 1987, let’s say that many fans were underwhelmed by what they saw. The first episode “Encounter at Farpoint” was interesting and gave the main characters good introductions. Plus, it introduced the omni-powerful entity Q into Star Trek lore and thanks to John DeLancie’s sardonic line delivery, the character stood out. But more importantly, the main star of the show Patrick Stewart, who played Captain Jean-Luc Picard, made a powerful impression. Sure, he was not the swashbuckling Captain Kirk, but Stewart made his character uniquely different from Kirk while exuding a commanding and thoughtful presence in the show.

Still, Star Trek: The Next Generation was nearly derailed in its wobbly first season. What handicapped the first Star Trek spinoff were poorly written scripts and characters. One of them was especially hated by fans, young Wesley Crusher played by Wil Wheaton. In many episodes he came off as petulant, self-important Gary Sue who was a critical key in many plot lines. Some episodes were incredibly dull and did not go anywhere. The early episodes aped the worst qualities of the original show where the Enterprise crew would visit a planet of the week and solve that planet’s problems. The made-up societies they encountered were just unbelievable and its people reeked of caricatures. The show also had a problem with coming up with interesting villains, aside from Q.

Yet, the show showed promise. As the first season drew to a close, Star Trek: The Next Generation seemed to find its bearings. The characters were better developed with the breakout being Data (Brent Spiner), who emulated the Spock position of being the outsider who questioned humanity. The stories also became more interesting as Star Trek first toyed with the idea of episodes-spanning sub-plots. In this case, a nefarious conspiracy at the heart of Starfleet and the first hints of the Borg, a cybernetic race that would not appear until the second season. It took some risks such as the above-mentioned conspiracy storyline that upset some parents for its violent content. There was also the killing off of a major character in the show (Tasha Yar, played by Denise Crosby), which was a first for Star Trek.

Fans began to come around and eventually embraced the Star Trek spinoff. Although the original show continues to be regarded as the best Star Trek show, it cannot be denied that Star Trek: The Next Generation has achieved its share of greatness through the season. It stood apart from its predecessor for being more thoughtful, for better exploring themes and characters and for its updated special effects.

When Star Trek: The Next Generation was being developed it was supposed to have featured descendants of the original Enterprise crew. Thankfully, the show evolved away from that and went with all-new characters. References to the original show were extremely rare, which allowed the show to develop its own identity. It would have been all too easy to just continue the same formula, but Roddenberry knew that for the new show to succeed it had to follow a different path. That is why we’re celebrating the show thirty years later. 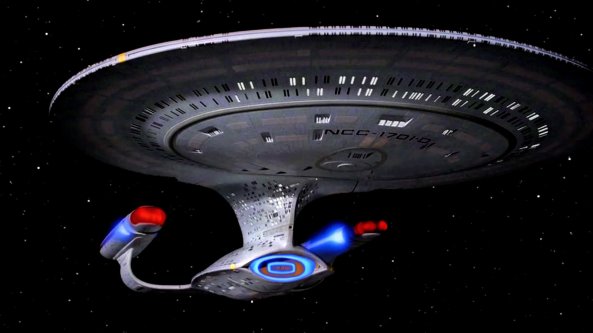 Now as if to commemorate the 30th anniversary of Star Trek: The Next Generation, a new Star Trek TV show will debut this month to pick up the baton. However, many fans are highly skeptical and dismissive of the new Star Trek: Discovery. The list of complaints continues growing as more details come to light, and many of them are valid. The core complaint is that the new show does not feel like Star Trek. But think about that, it’s the same gripe leveled at Star Trek: The Next Generation when it first aired. The new show seems like it will take Star Trek in a new direction, just like the first Trek spinoff did. Star Trek: Discovery may not hit a homerun at first, but fans should keep an open mind and show some patience when it premieres. It may find its legs and be as memorable and great as Star Trek: The Next Generation, the first Star Trek spinoff that proved it was possible to catch lightning in a bottle twice.

4 comments on “Star Trek: The Next Generation Showed It Was Possible To Catch Lightning In A Bottle Twice”