The latest film in the Jurassic Park films, Jurassic World: Fallen Kingdom, has finally been released here in North America. Many of the reviews have been downright negative and nasty, and honestly, for the most part, it’s undeserved. The fifth Jurassic Park film is an exciting and suspenseful film that adds to the film series.

Taking place three years after Jurassic World, the latest sequel follows up on the disaster that befell the live-dinosaur theme park, Jurassic World. Now abandoned, the park and the island it is on has been overtaken by dinosaurs. However, the island has an active volcano that threatens the lives of the dinosaurs. A worldwide debate opens up over whether or not to save the endangered animals. Some believe nature should take its course and drive the dinosaurs to extinction again while others have taken up the cause of the dinosaurs.

An obvious homage to Jurassic Park

One of that movement’s leaders is Claire Dearing (Bryce Dallas Howard), former operations manager of Jurassic World. She is approached by a Eli Mills (Rafe Spall) who represents Benjamin Lockwood (James Cromwell), a former partner of Jurassic Park’s creator John Hammond. Lockwood wants to evacuate the dinosaurs to an island sanctuary and enlists Claire’s help. She in turn recruits her ex-boyfriend, Owen Grady (Chris Pratt), a former raptor wrangler. Once they get to the island, the volcano erupts and as shown in trailers that revealed too much of the film’s plot, they are betrayed by Mills. He only wants to evacuate the dinosaurs to sell them on the black market and has also spearheaded the creation of a new hybrid dinosaur, the indoraptor. Now it’s up to Owen, Claire, and a couple of colleagues to stop Mills’ plans. 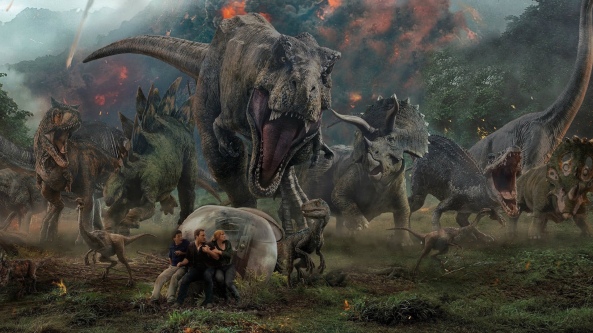 For the fifth film in a film franchise, Jurassic World: Fallen Kingdom is surprisingly fresh and exciting. It has plenty of thrilling and suspenseful scenes, as well as some unexpected heart-breaking moments. One thing that sets it apart from the other films is that it brings up the notion of whether or not these prehistoric animals have rights. They were artificially created so are they entitled to be protected as an endangered species? The film presents both sides of the argument fairly and it leaves you conflicted. You see the majesty of these creatures, but know that they should not be alive now. Is it right to share our current world with them? Why defy nature again? Some of these messages get lost in the action and dinosaur action, but they stay with you nonetheless. Then an unusual twist comes up with Lockwood’s young granddaughter, Maisie (Isabella Sermon), that adds a new wrinkle to the film series. 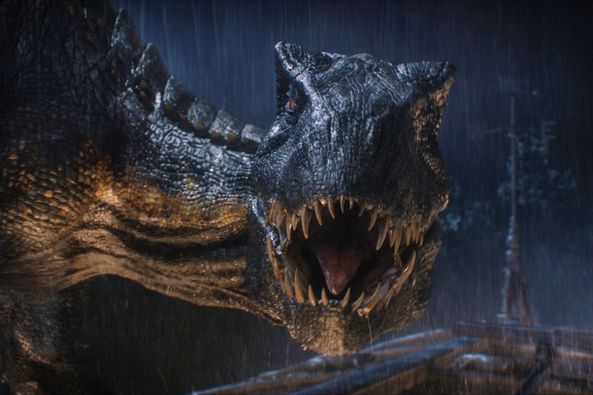 Like the previous films, Jurassic World: Fallen Kingdom also features the same themes about tinkering with mother nature and its disastrous results. This time, the lesson comes with the indoraptor, the new dinosaur baddie. It’s a frightening creation, think of it as a giant raptor, but it doesn’t have the bite that the famous indominous rex had in Jurassic World. On the other hand, the confrontations between it and Owen (along with Blue, the raptor that he raised) are more personal given that the indoraptor is closer in size to its opponents when compared to the giant indominous rex.

Jurassic World: Fallen Kingdom has many similarities to the first sequel The Lost World: Jurassic Park, but is better executed. The director J.A. Bayona is quite skilled in delivering the jumps and thrills with some novel scenes. Some of them add new ways to scare us, while others are repeats of earlier films, which will put off some viewers. But in defense, these moments pay homage to Steven Spielberg’s epics and are done well. This can be seen as a drawback, but for the most part, Bayona is able to give us new ways of astounding us. Like with Spielberg, Bayona is able to convey the fact that the dinosaurs are just animals, which can bring both awe and frights. It goes without saying that it is always a joy to see our favorite returning dinos like the Tyrannosaurus Rex and Blue.

The King of the Jungle meets the Tyrant King

Of course, it cannot compare to the original Jurassic Park, although this film is better than Spielberg’s own The Lost Wold: Jurassic Park and the third film in the series. In some ways it is better than Jurassic World while the fourth film has some elements that surpass the latest entry. There are many plot holes and puzzling questions that are never addressed. Chiefly with its premise about the island volcano. In previous films, there is a nearby island that was where the dinosaurs were originally bred. Why not just send the dinosaurs there? Even though the second island is mentioned, this is never addressed in the film. Also the motivations and actions of certain characters are questionable. Speaking of characters, while some like Claire are developed others are one note like Mills, who just oozes corporate douchebag villain. Chris Pratt, as usual, delivers a solid performance and commands the screen. His scenes with Blue are quite touching and effectively show the bond between man and dinosaur. Howard also turns in a good performance and they actually have her not run around in high heels this time!

A Man and his Dinosaur

Jurassic World: Fallen Kingdom has a lot of setups for its sequel, which is not surprising given that it is the middle film in the new trilogy. It’s an exciting premise that hopefully Colin Trevorrow, the next film’s director, will be able to capitalize on.