It’s that time of year when we dread the things that go bump in the night…or in deep space or in a mad scientists’ lab. Science fiction and horror have gone together hand in hand for ages. Ever since the dawn of film, these two combined genres presented some of the most memorable genre films for fans. Here for your examination are the top 10 sci-fi horror films.

Colonists onboard a generational starship wake up early during their voyage. They soon learn that their ship is crawling with savage mutants that endanger them and the ship. Full of jump scares, tension and thrills, Pandorum is an underrated gem that continually surprises you until its end.

Echoing the 1950s paranoia about communism, this adaptation of Jack Finney’s novel about aliens taking over humans from within is unsettling. It may make you afraid to go to sleep after watching it! The loss of identity, emotional bonds, and one’s humanity are the central themes in this sci-fi classic. Its 1978 remake is also noteworthy for the same reasons.

One of the first sci-fi horror films is the legendary James Whale-directed version of Mary Shelley’s literary classic. Featuring Boris Karloff as the resurrected Creature, Frankenstein is still atmospheric and creepy, while evoking sympathy for the Creature.

The most recent member of this list is one of the most frightening. Earth has been overrun by vicious alien creatures that hunt by sound, forcing humanity into hiding. A Quiet Place overflows with tension and fear as a family struggles to survive against the alien predators by not making noise.

David Cronenberg’s classic body-horror classic outdoes the cheesy original version it is based on and is an apt AIDS allegory for its time. Quirky and likeable scientist, Seth Brundle (Jeff Goldblum), experiments on himself with his teleporting machine not realizing he is genetically fused with a fly. Tragically, he begins a hideous body transformation into a human-insect hybrid that will disturb viewers as the completed metamorphosis is revealed in The Fly’s final scenes.

The third Frank Darabont adaptation of Stephen King’s literary works is genuinely disturbing and frightening. Residents of a Maine town take refuge in a supermarket after a military experiment accidently opens a dimensional passage that allows monsters into our world. More than a monster movie, The Mist explores the theme that we are our own worst monsters. It also features one of the most unsettling endings in film history. It’s a true gut punch.

Think of this film as a haunted house in space story. The crew of a rescue spaceship board a lost spaceship that suddenly re-appears on the edge of our solar system. The crew discovers that the lost ship’s experiment with FTL opened a doorway to a hellish dimension and they become the ship’s latest victims. Event Horizon is a chilling cautionary tale with disturbing imagery about how we should be careful about pushing the boundaries of science.

This film helped jumpstart the recent zombie craze even though it is not technically about zombies. A man-made virus is accidently released and decimates the UK, rapidly turning its victims into mindless, bloodthirsty killers.

Enhanced with a pounding score, expert direction and a harrowing sense of dread, this film set new standards for sci-fi horror films. 28 Days Later is kinetically terrifying with scenes of the fast-moving killers chasing the film’s characters, while offering a sobering humanist drama about survival and holding onto your humanity. 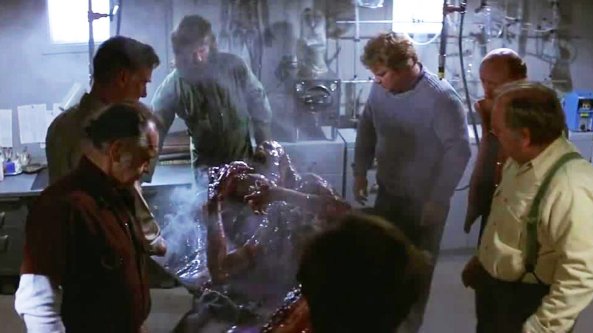 The remake of the 1950s film The Thing From Another World outshone the original while being more faithful to its literary roots. Much more than an alien invasion thriller taking place in an Antarctic outpost, John Carpenter’s The Thing is a claustrophobic and disgusting horror film with ghastly physical effects that still hold up to this day.

However, what made The Thing so memorable was the way Carpenter injected deep paranoia into the film as the isolated characters turned against each other. What is even more remarkable, is that even though the film was remade in 2011 with “modern” CG effects, it pales to the practical effects and makeup of the Carpenter classic, which was also more moody and blood curdling.

The crew of an interstellar mining ship bring onboard an alien life form that proceeds to kill them off one by one. As simple as that sounds, Alien is much more than its plot implies. It is one of the most influential sci-fi horror films of all time and set standards for gore, character development, thrills, pacing and atmosphere. Let’s not forget that the visual design of the alien xenomoph is disgustingly unique and has never been topped in terms of showing a distinctly inhuman look.

The starship itself functions as its own haunted house with foreboding shadows and corners, which gives the xenomorph perfect hiding places, while entrapping the crew themselves. Then there is the infamous chestburster scene, which is still horrifying to watch today. That scene alone set Alien above all other sci-fi horror films and is one of many reasons why this film is at the top of this list of top 10 sci-fi horror films.

Do any of these films make your own top 10 list of sci-fi horror films? Leave a comment below.