The wait for the next Avengers film, the next offering in the Marvel Cinematic Universe (MCU), was quite intense rivaling that of Avengers: Infinity War. But after being delayed by a couple of days the Avengers; Endgame trailer is finally here!

Now the big question is does it live up to the hype? No. That is to be expected because of all the build up following Avengers: Infinity War and what Avengers: Endgame represents. Still, this is a good, solid trailer that is a true teaser.

Basically it sets up what has happened in the aftermath of the Decimation (the official MCU word for Thanos’ Snapture). First we see Tony limping along home in the Benatar, the ship belonging to the Guardians of the Galaxy. He is at the end of his rope, defeated, food and water gone, and he is ready to say his goodbye to the mortal realm. A quick glimpse of Thanos then takes us to Earth where we see the aftermath as people struggle to cope with the fact that half of all life is now gone.

The remaining Avengers mourn the lost including Spider-Man and Shuri, Black Panther’s sister, who many have hoped would have been around to help salvage the situation. From there we witness the return of Hawkeye, missing during Avengers: Infinity War, but now taking up the mantle of Ronin.

The last moments show us a determined Black Widow and Captain America ready to undertake a final, desperate mission…cut to the title reveal. Lastly, a moment of much needed levity arrives. Scott Lang aka Ant-Man literally shows up on the doorstep of the Avengers’ headquarters with the machine that can save everyone. That is the quantum bridge machine that stranded him in the quantum realm as shown in the post-credits scene of Ant-Man and the Wasp. Obviously, Scott found a way out and thus his importance rises in the MCU. Of course, that is the way it should be: a plucky, underpowered hero will be the key to victory. 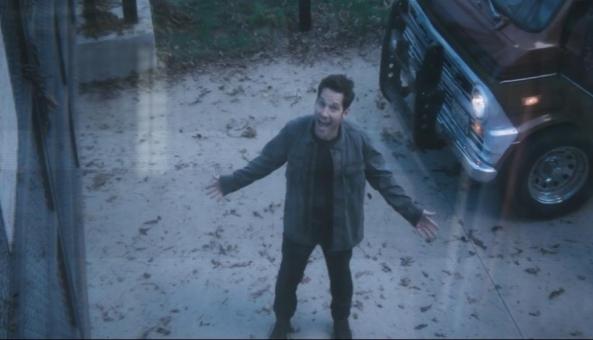 The trailer for Avengers: Endgame isn’t explosive or jammed with appearances ofall the MCU heroes as the first Infinity War trailer was. But it shouldn’t have been. It needed to give us a sense of despair and hopelessness and it did so perfectly. Then, it delivered a sliver of hope with Ant-Man’s arrival. It was similar to how the post-credits scene in Avengers: Infinity War ended on a hopfule note the summoning of Captain Marvel. Speaking of her, she was unexpectedly absent from this trailer, as was Rocket Raccoon, one of the survivors of the Snapture. But they’ll probably appear in the next trailer. On a related note, aside from a quick look at Spider-Man (or rather Peter Parker), none of the Decimation victims are shown. This is appropriate because we know in the end they’ll be brought back but the focus should be on the survivors. So kudos to the trailer for not featuring them taking part in some dazzling fight scene and undermining their supposed deaths in Infinity War.

On the whole, it’s not the best trailer, but it’s the one that hits the right note for the mood it sought to convey. Can’t wait for the next one! That’ll probably happen during the Super Bowl. In case you haven’t seen the Avengers: Endgame trailer yet, here it is for your viewing pleasure. But if you’ve seen it before, check it out again, it’s quite awesome.

4 comments on “The Endgame Starts In The First Avengers: Endgame Trailer”