HBO’s sequel to the famous DC comic book mini-series Watchmen has just concluded its nine-episode run, and now it is time to talk about the series. Spoilers will follow after this for both the original comic book and this TV series. 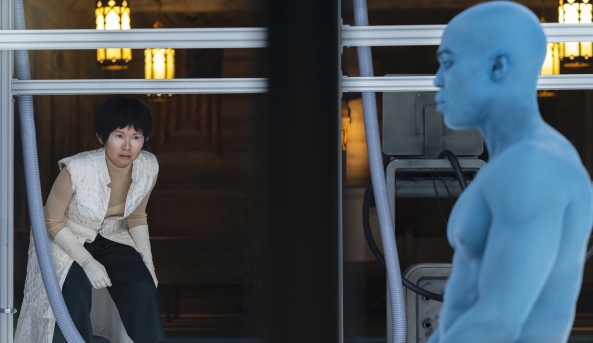 Watchmen was one of the most influential and revolutionary comic books that ever came out. Co-created by Alan Moore and Dave Gibbons, the tale was a complex one taking place in an alternate world where superheroes existed since the mid-20th century but were unpowered except for one incredible exception. Based loosely on Captain Atom, Dr. Manhattan was a nuclear scientist who was in an atomic accident and gained the powers of a god. With his existence, history radically changed with Richard Nixon still the U.S. president in 1985, Vietnam conquered by the U.S., and the world is on the brink of a nuclear holocaust. One of the other superheroes, Ozymandias engineers a complex scheme to unite humanity by creating a hoax of an extra-dimensional alien incursion. This works, but at the cost of three million people.

The just-concluded TV series takes place now in 2019, decades after the alien incursion (which links it closer to the comic book unlike the 2009 movie adaptation that changed Ozymandias’ plot) and America has changed just as radically again.

Robert Redford is the U.S. president and like Nixon, overstayed his terms in office, having been inaugurated in 1992. Now, the U.S. is struggling to become a liberal utopia, with African-Americans eligible for reparations and white supremacist terrorist groups fighting against the woke society they’re forced to live in.

Watchmen takes place in Tulsa, Oklahoma and centers on Angela Abar (Regina King), a supposedly retired cop who hails from the 51st state of Vietnam and moonlights as the illegal vigilante Sister Night. Her friend, Tulsa’s police chief, Judd Crawford (Don Johnson), is killed under mysterious circumstances and her investigation unravels a complex plot. This involves Dr. Manhattan (Yahya Abdul-Mateen II), who is not on Mars as he was supposed to be, Ozymandias (Jeremy Irons), the barbaric architect of world peace in an unusual exile, an elderly Will Reeves (Louis Gossett Jr.), Crawford’s supposed killer, Lady Trieu (Hong Chau), the head of a powerful organization, and FBI agent Laurie Blake (Jean Smart) aka the former Silk Spectre II.

Even though on the surface, Watchmen is about superheroes it really isn’t. Like the comic book it is based on, the TV series is a very complex, non-linear tale involving deeply emotional characters and examines the strange, yet somehow familiar world. The world building is delightful with plenty of Easter eggs and references to the original comic book and tidbits to how different this world is compared to ours. But like any worthwhile story, Watchmen sticks with the plot and characters and slowly hooks in viewers as it unveils more and more jaw dropping revelations.

Starting with the fact that Crawford was a white supremacist to the revelation that the very first superhero was a bi-sexual African-American acting out on frustration to the hidden identity of Dr. Manhattan and his relationship with Angela Abar, Watchmen is a wonderfully presented, worthwhile sequel to the classic comic book. However, it does not seem like a comic book brought to life (a flaw with the movie adaptation), but as its own medium. One could complain that by not feeling like a comic book, this version of Watchmen seems like it was just a sci-fi story that stuck in references to the comic book to allow it to be greenlit. That is open to debate, but nevertheless the product is exemplary.

It is fairly easy to get drawn into the series from the beginning as unanswered peculiarities are shown, such as squid showers and background images which show that 9/11 never happened. However, several episodes are devoted to the origin of several characters, the standouts being “This Extraordinary Being”, which chronicles the tragic back story of Hooded Justice, and “A God Walks Into Abar”, which explores the temporal complexities of Dr. Manhattan while being a love story at the same time.

Much of Watchmen may be upsetting for some due to its subject matter about race relations, but many episodes are very powerful and compelling. While it is not exactly like its comic book predecessor, Watchmen is a worthy sequel and expansion to that comic book. It should be enjoyed by comic book, alternate history and sci-fi fans and others wanting something different with live-action superhero presentations.