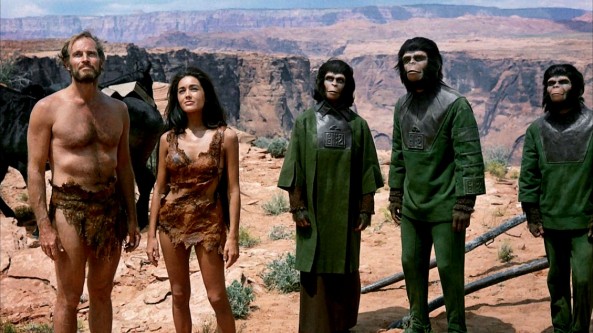 This year marks a very significant anniversary for sci-fi films. Of course, it is the 50th anniversary of 2001: A Space Odyssey, but that is not the only sci-fi classic celebrating its 50th anniversary. That other film is Planet of the Apes, a sci-fi masterpiece which launched a successful film franchise that resonates to this day.

Planet of the Apes was a 1968 film adaptation of Pierre Boullle’s novel, which was published in 1963. The film, like the novel, was an allegorical examination of human society and how inhumane people can be. In the story’s case, the humans were represented by super intelligent apes that control the planet.

George Taylor (Charlton Heston in one of his greatest performances) is an astronaut on a deep-space mission to find a new habitable world. He and his fellow astronauts crash land on an Earth-like planet centuries from now. Before long, Taylor is the only survivor and is captured by upright, talking ape-like beings that rule a pre-industrial civilization. During his capture, Taylor is injured and unable to talk, much less communicate. Most of the apes that hold him captive for science experiments treat him inhumanely and lump him along with the other mute and animalistic humans that inhabit the world.

Taylor stands out because of his expressed intelligence and catches the attention of a simian scientist studying him, Dr. Zira (Kim Hunter). As Taylor regains his speech (done so dramatically when he shouts defiantly “Take your stinking paws off me, you damn, dirty ape!”), he befriends Zira and her husband, Cornelius (Roddy McDowell), an archaeologist.  These two champion his cause for equal rights against the ruling apes that refuse to recognize Taylor’s intelligence. One of these members is the fundamentalist Dr. Zaius (Maurice Evans), who won’t acknowledge Taylor’s sentience, and seems to be hiding secrets about his planet’s dark past.

Taylor’s struggle is the heart of Planet of the Apes and echoed the civil rights movement that engulfed American society in 1968. What is remarkable about Taylor’s plight is that at the start of the film he had a dim, pessimistic view of humanity. So it’s a great sense of irony when he alone is forced to champion humanity to the dogmatic apes that refuse to acknowledge his rights, let alone his intelligence. This was best seen in the pivotal tribunal scene where Taylor pleads his case to the obtuse Assembly led by Zaius. They try to deny his humanity and dignity, but he rose to the occasion and we cheered him on.