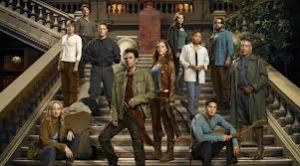 In the new NBC series Revolution, viewers are presented a world fifteen years from now that is in a new Dark Age. In the opening scenes of Revolution’s pilot, the electricity throughout the world abruptly fails. Moments before this event happened Ben Matheson (Tim Guinee) races to his home and warns  his wife Rachel (Elizabeth Mitchell) and their two children about what will happen. He also manages to phone his brother Miles (Billy Burke) about it just as the lights go out everywhere in the world. Viewers got a quick glimpse of the immediate impact of this blackout as airplanes fell out of the sky and cities plunged into darkness. Revolution jumps ahead fifteen years later to a radically changed world. Without electricity, governments collapsed and militias took over as everyone struggled to survive with the bare necessities. Ben is now living in a small, rustic community in Illinois with his teenage children Charlie (Tracy Spiridakos) and Danny (Graham Rogers) and a new lover Maggie Foster (Anna Lise Phillips). 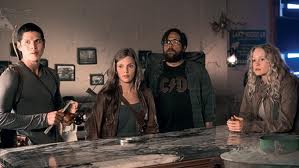 Their humble existence is interrupted with a visit by militia men, led by Captain Tom Neville (Giancarlo Esposito), belonging to a local tyrannical power called the Monroe Republic. Neville was sent by the Republic’s despot General Sebastian Monroe (David Lyons) to conscript Ben. During a melee Ben is killed and Danny is taken prisoner by the militia. Before Ben died he entrusted an amulet to Maggie and his friend Aaron Pittman (Zak Orth), which is capable of generating small amounts of electricity. What this means has not been revealed nor what caused the blackout. On Ben’s dying advice Charlie, Maggie and Aaron travel by foot to the decaying city of Chicago and recruit Miles for help in liberating Danny. 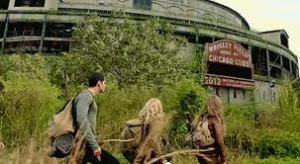 As the series progresses, viewers learn bits and pieces about the world and the characters. It was revealed that Miles was once friends with Monroe and was, in fact, a founder of the Monroe Republic. Now Miles has broken ties with Monroe and exists as a cynical Han Solo type until dragged into the limelight by Charlie and company. Monroe wants to have the power restored to spread his reign and he knows that Ben had knowledge about what caused the blackout. A plot development revealed that Rachel is still alive and Monroe’s prisoner. He intends to use her captured son as leverage to get her to reveal what she knows about the blackout. Also in reference to the show’s title, it turns out that there is a revolutionary movement among some people the main characters encounter to restore the United States. Peppered throughout the episodes are interesting flashbacks that show the immediate aftermath of the blackout, taking place days, even months after the event. The most touching one featured Maggie, who is British. In her story it’s revealed that she is cut off from her children in England and she tried for years to get back to England before giving up. Despondent and suicidal, she was found by Ben and his children sometime after Rachel was taken prisoner and Maggie became part of the family. At times, these flashbacks are the most interesting scenes in an episode. 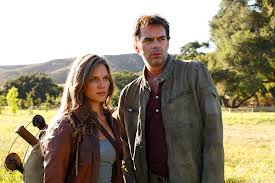 Admittedly, Revolution has constant plot developments but the show is not overwhelming and things are kept at a fast pace that moves the overall story along. Many character have intriguing backgrounds and developments such as the revelation that Miles helped form the Monroe Republic and is hated and feared by many. The show took a daring step by unexpectedly killing off one of the main characters, a victim of a knife wound. This showed that the greatest dangers in this new Dark Age can come from fairly mundane and presently treatable ailments. The production design is very excellent and illustrates a world where nature is reclaiming the land as vegetation engulfs cities and towns. The credit for Revolution’s well presentation should go to series creator Eric Kripke (who created Supernatural), who serves as executive producer along with Iron Man’s director Jon Favreau and J. J. Abrams.

However, Revolution does have flaws. Sometimes Charlie is annoying, and how is it that Aaron (formerly a Google executive) is still overweight and seems to have no clue on how to survive in a post-apocalyptic environment? One would think that in the years since the blackout the characters would’ve been hardened and learned some survival skills. Drinking games can be made to how many times the roguish Miles threatens to leave the group or Danny’s many failed escape attempts. Why not keep that teenager shackled up in chains? But these seem to be the typical growing pains that every series goes through and the show seems to be getting stronger with each passing episode. 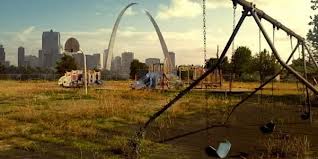 At first glance Revolution seems to borrow heavily from popular post-apocalyptic yarns like The Postman and obviously S. M. Stirling’s Emberverse books. But the series is setting its own fascinating mythology that hopefully the network will allow to play out to a satisfactory conclusion.