“What does God need with a starship?”

After the triumph of Star Trek IV: The Voyage Home, anticipation and demand was high for another Star Trek film. What audiences received was William Shatner’s directorial effort Star Trek V: The Final Frontier.

The fifth Star Trek film is an undeniable disappointment and it has many things going against it. Ranked by many as the worst Star Trek film, it’s hands down the weakest one to feature the original cast from the TV show. Let’s face it, Star Trek IV: The Voyage Home was a difficult act to follow. It would’ve taken a master director and writer to deliver a worthwhile followup. But Paramount Studios wanted to placate William Shatner, who wanted his shot at the directing chair because his buddy Leonard Nimoy got to direct two Star Trek films. So in addition to paying him and Nimoy a high salary, they allowed him to direct the fifth Star Trek film. 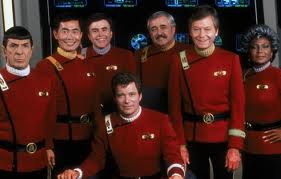 Now it’s easy to lay all the blame on Shatner but there are others to blame for this film. Notably Paramount Studios itself, who should shoulder the majority of the blame. In a foolish move, the studio severely slashed the budget, which resulted in the amateurish looking special effects that were horrendously bad and added to the film’s drawbacks. They also wanted a lighthearted romp similar to Star Trek IV because the studio felt that the comedy in that film made it such a success and wanted to repeat the formula. Instead of gentle comedy, Star Trek V: The Final Frontier came off as goofy and too heavy handed in the laugh-o-meter with our heroes behaving at times out of character. There were laughs alright, just unintentional ones. Who can forget the immortal line, “Spock, it’s me. It’s Sybok!” The Writer’s Strike in 1988 curtailed the film’s pre-production and didn’t allow time for a polished script. When you boil it down what the film needed most was a decent script doctor.

The film starts in a desert planet, Nimbus III, which has the so-called Paradise City colony set up by Klingons, Romulans and the Federation as a means of promoting peaceful coexistence. But the place is run down and practically forgotten. Out of the horizon, a mysterious stranger riding on a blue horse-like animal appears and promises to heal people of their painful memories through his empathic powers and in return asks for followers on a religious crusade. This person is a bearded Vulcan called Sybok (Laurence Luckinbill) and he needs a starship.

The film then switches over to Earth, where James T. Kirk (William Shatner), recently demoted from admiral to a captain, is spending shore leave mountain climbing on El Capitan in Yosemite National Park. After being saved from falling by his best friend Spock (Leonard Nimoy), he and Spock settle down for the night at a campfire with their other close friend Dr. Leonard McCoy (DeForest Kelley) and shoot the breeze. The genial banter between the three was the best thing about the film. It was genuine and funny without going overboard. Shatner conveyed a sense that the trio were close friends with a deep bond.

At this time on Nimbus III, Paradise City welcomes the newest Romulan ambassador (Cynthia Gouw), who is all full of energy and optimism. She is greeted instead by two surly and cynical ambassadors (David Warner and Charles Cooper), a human and Klingon respectively. Oddly enough, she and the Klingon are the only members of their race seen in the city, everyone else is either human or some kind of alien. These scenes with the ambassadors were interesting since the actors were good in their roles. The film presented a seedier side to life in the 23rd century, which was an interesting contrast to earlier films’ depictions of near-nirvana.

We see drunkards (principally with Cooper playing the bitter and washed up Klingon general), cheap salesmen (watch the video monitors in Paradise City’s bar) wearing ugly plaid jackets and alien strippers. The latter being a feline-based alien with three breasts that predated the famous hooker seen in the original Total Recall. It was a refreshing change from the ethereal utopias from earlier films. Soon after, the colony is invaded and conquered by a literal rag-tag army from the desert led by Sybok, who promises to heal everyone of their spiritual pain.

Back on Earth, our heroes’ shore leave is interrupted by an urgent call from Starfleet. They rush back to their ship the Enterprise-A, a replacement of the ship lost in Star Trek III: The Search For Spock, to learn about their next mission. They are ordered to go to Nimbus III and save the hostages in Paradise City. But there’s a problem with the Enterprise-A. The new ship is a

lemon. Why would Starfleet reward Kirk and company with a broken down ship after they saved the Earth is beyond me. Except maybe to provide a moronic venue for cheap laughs, such as Chief Engineer Montgomery “Scotty” Scott’s (James Doohan) tirades about needed repairs and sight gags such as malfunctioning turbo lifts. The plot point of a broken ship that in the end pulls through would’ve been an interesting story. But that gets lost in this film. As for the film’s desperate earning of laughs at this point, the funniest gag on the ship is Kirk’s reaction when he’s told by an admiral (producer Harve Bennett in a cameo) via viewscreen that Starfleet needs him. He turns away from his superior and makes an exasperated face. It’s a good way of acknowledging this common plot thread of the Enterprise crew being the only capable personnel in Starfleet. Seriously, why send the Enterprise-A? It’s undergoing repairs on Earth so why have it travel all the way to this distant planet? There aren’t any ships closer to the planet? Doesn’t Starfleet have its own version of SEAL Team Six for these kind of situations?