For most of the year, we Star Trek fans have been teased with the casting of the upcoming Star Trek: Discovery TV show that is premiering next year. We were excited over the casting of Michelle Yeoh, Doug Jones and others who would play diverse characters in the show, but no lead had been cast. That all changed today when word came that after an exhaustive search Sonequa Martin-Green has just been cast to play the lead role Lt. Commander Rainsford in Star Trek’s eagerly awaited return to TV.

Most fans know Martin-Green from the hit TV show The Walking Dead. For those of you out there who don’t she plays the role of Sasha, one of the few survivors of the walker apocalypse. Not to beat up on The Walking Dead, but that show has been in a rut this season with the Negan overkill and the tropes that the characters, including Sasha had been going through.

Obviously, Sonequa Martin-Green’s casting means that Sasha will probably be the next victim of Negan on The Walking Dead. It’s just as well, since her arc had come to a conclusion last season and the men she cared about in her life, her brother, Tyreese, and her new lover Abraham are both dead. In other words, The Walking Dead’s loss is Star Trek: Discovery’s gain. 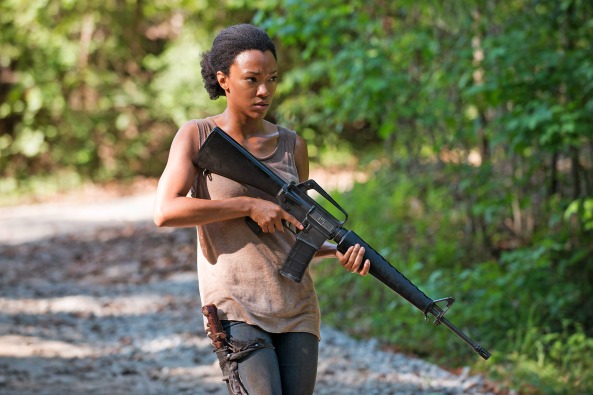 Her casting is quite inspired, since it covers many important areas. One, she is the first woman of color to have the lead role in a Star Trek show. The honor of the first non-white goes to Avery Brooks who starred as Captain Ben Sisko in Star Trek: Deep Space Nine back in the 1990s. Ironically enough, like Sisko, Sonequa Martin-Green’s Rainsford won’t begin the show as the captain but as a lieutenant commander. Hopefully as what eventually happened with Sisko, her character will get promoted to captain before too long because she has the look of a Star Trek captain.

But more importantly, as seen in The Walking Dead, Martin-Green has the acting chops to headline a TV show and being that she has experience in a related genre, she will please many fans who only want the best casting options for the beloved Star Trek franchise. Finally, her landing the role cements the notion that Star Trek: Discovery will be populated by a diverse group of people with different backgrounds. This is actually reflective of our society today, despite what some on the fringe-elements may wish for, and this casting proves that Star Trek on the whole is able to keep up with the times.

Seriously, this is an excellent cap to Star Trek’s 50th anniversary as this year draws to a close.