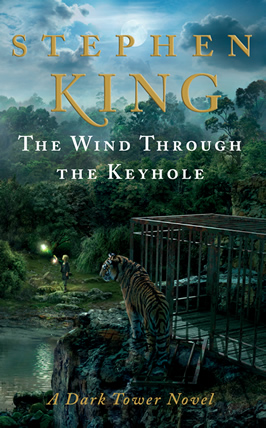 It’s been eight years since the final installment of The Dark Tower was released. For those who haven’t read them, Stephen King’s seven-book epic of The Dark Tower told a fantasy-science fiction saga with horror elements of a mythical gunslinger named Roland Deschain in the far future and his interdimensional quest to save reality from falling into chaos. Since the last book fans have been clamoring for more visits to the world of Roland and his ka-tet (or band of apprentice gunslingers). Based on the way the final book The Dark Tower ended it seemed as if the final word was written. But the ending, without giving anything away, had a cyclical nature. Fans pondered if there were more books or stories coming. In fact, King said back in 2009 regarding the series that “It’s not really done yet. Those seven books are really sections of one uber-long novel.” Well, now there is a brand new Dark Tower book to devour. The Wind Through The Keyhole has finally arrived and devotees can add this volume to King’s masterworks.

Many of the beloved characters from the saga are featured in this volume like Eddie and Susannah Dean, Jake Chambers, Oy the billy-bumbler and of course, Roland Deschain the last gunslinger. According to promos and samples released, The Wind Through The Keyhole takes place between the fourth and fifth volume of The Dark Tower saga. What is interesting is that while the book is promoted as a Dark Tower novel, it almost seems as if this novel can stand on its own while still taking place in the that universe.

When it begins, Roland and his ka-tet are on their way from the Emerald City (where the fourth book ended) to Calla Bryn Sturgis (where the fifth book takes place) but have to take refuge from a storm. While in their shelter, Roland recounts a tale to his friends that took place when he was much younger. In that story, young Roland is sent on a mission to investigate a killer shape shifter and meets a young boy. Hoping to calm him, Roland tells him a bedtime story-a story within a story. So in many ways, The Wind Through The Keyhole is like Wizard And Glass where that book went into Roland’s early days as well while using modern Roland and his ka-tet as a framing device. While the novel may not add anything to the overall story of The Dark Tower it promises to provide a fascinating look at Roland’s world.

Regardless of the book’s narrative, its release is a cause of celebration for many readers. Probably the biggest question they have is will there be more lost tales? Stephen King teased many with the idea that the entire saga hasn’t been revealed yet. Then again, he could’ve been alluding to the comic books released by Marvel that dwelled on his younger days. At this point there isn’t any way to know for certain if we’ve heard the last of Roland Deschain. Hopefully we haven’t.