In many forms of media, vampires have been feared by humans and for good reasons. But one frightening element about them is their physical superiority to mere humans. Vampires in most stories possess superhuman strength, speed and reflexes. They’re also semi-telepathic and can fly, not to mention are nearly immortal. Recent tales have vampires living in complex secret societies and only tolerate humans who they consider to be glorified cattle.

So if it came down to it, how would humanity fare if vampires decided to take over? Well it wouldn’t be an automatic victory for vampires.

Think about it, sure vampires have all these fantastic powers but they have a severe weakness­­ ­— they’re vulnerable to sunlight. At best, as in the original Dracula novel, vampires while able to survive in the daytime are very weak. At worst, see an episode of True Blood or Being Human were vampires literally burst into flame when exposed to sunlight. If they were to actually exist that could be why they haven’t come out and conquered us. If there were an open war between humans and vampires, humans only need to wait until dawn to open coffins containing the vampires and expose them to direct sunlight. One thing that sunlight contains is ultraviolet radiation. Perhaps that radiation can be weaponized for night battles.

They have other weaknesses as well. Traditionally, they’re sensitive to garlic, holy water and religious symbols like crosses. Modern vampire tales like those written by Anne Rice have it that those so-called weapons are useless and have no effect on vampires. In Stephen King’s Salem’s Lot, it’s stated that for a cross to work, the human bearing it must have religious faith. However, vampires in modern tales are still vulnerable to wooden stakes and sometimes silver (as seen in True Blood where the metal is used to incapacitate the night creatures).

Aside from sunlight and wooden stakes, a good beheading is a guaranteed way to kill vampires. Just ask the Winchester Brothers in Supernatural. In that TV show, beheadings are the only way to kill vampires, which early in the show’s run were considered an endangered species.

Movies like Blade and The Lost Boys feature heroes who come up with unique and clever adaptations of vampire weaknesses. For instance, the young heroes in The Lost Boys filled up ordinary water guns with holy water. Let’s not get into how formidable Blade was with his weapons. He was a bonafide one-man army against the undead with all the stabbing weapons and guns. In True Blood and the books the show is based on (known as The Southern Vampire Mysteries by Charlaine Harris) vampires openly exist alongside humans, so police and militia groups routinely use wooden bullets against vampires along with silver. In one of the recent episodes when 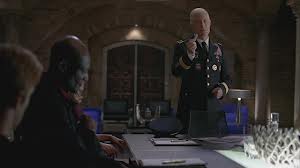 the Vampire Authority began to run amok, a human general threatened them. He revealed that humanity’s armies had already devised weapons to be used in the event of a war with the undead. Viewers got a taste of what a war would look like in second season episodes of True Blood where a radical, armed religious group threatened to wipe out vampires.

So if a state of war were to occur, humanity though physically outmatched has many aces up its collective sleeves. It’s been implied in many modern stories that humans far outnumber vampires which is one reason why they haven’t tried to conquer the planet. In the case of war, the huge numbers of humans will be a decided advantage and don’t forget that time and time again, we have shown an ability to adapt and refine battle tactics.

Probably the only way that vampires can counter humanity is in the form of a fast spreading virus. There are many page-turning books about a world overrun by vampires. The most famous one is Richard Mathesen’s I Am Legend, which was adapted three times into film. In I Am Legend, a pandemic is responsible for turning Earth’s population into vampire-like creatures. Other recent books that explore this theme of a virus transforming people into vampires are Justin Cronin’s The Passage and The Strain by Guillermo Del Toro and Chuck Hogan.

The recent film Daybreakers is also about a world where a virus transforms humans into vampires. The outbreak was so severe that in the space of a few years, vampires had overrun human civilization, reducing the few humans left into cattle.

But unless a virus  quickly devastates humanity in the same way as shown in I Am Legend, don’t be so sure to count out humanity if war broke out against vampires. Sure one on one, a human probably cannot beat a vampire but it’s being demonstrated in these tales that a vampire can lose.