Bit by bit, Marvel Entertainment is reclaiming its film properties under their own Marvel Studios. The latest acquisition is the blind superhero Daredevil. As recently as this summer Fox, who had the rights to the Daredevil property, tried to greenlight a Daredevil reboot but were unable to pull it off.

Whether or not Marvel Studios will launch their own reboot remains to be seen, but it seems likely given Daredevil’s popularity. Obviously Ben Affleck and the original cast won’t reprise their roles so who would be the best choices to play Daredevil and his gritty supporting cast? These are some possibilities:

Ben Urich: The hard-nosed Daily Bugle reporter and Daredevil ally needs to be portrayed by someone who exudes integrity and intelligence. Tony Shalhoub should be offered the role in a Daredevil reboot.

Stick: Daredevil’s blind mentor and sensei who taught him how to fight and use his extraordinary senses was a genuine old bad ass. Many online fans have opined that Scott Glenn would make a great Stick and frankly they are correct.

deadliest adversary. The best actor for Bullseye has to give off a psychotic, vicious presence. He is someone who can be terrifying with his nihilistic demeanor and ability to make anything into a weapon. Jackie Earl Haley, who played a rebooted Freddie Krueger and Rorschach in Watchmen, makes a perfect Bullseye.

Kingpin/Wilson Fisk: Daredevil’s greatest and most insidious enemy is a rotund powerhouse and master crime lord. Michael Clarke Duncan was an excellent Kingpin in Daredevil, sadly he’s no longer with us so he cannot reprise the role in a Daredevil reboot. Among the many other choices left to play the Kingpin, Philip Seymour Hoffman is the top pick (assuming he’s willing to shave his head or at least wear a bald cap), the actor is large and can do menacing villains, plus he’s one of the best actors around.

Elektra Natchios: As a master assassin and Daredevil’s conflicted lover, Elektra needs to be played by someone who is strikingly beautiful and athletic. The wrong choice will doom the character from the start. That is one reason many say the original Daredevil didn’t work. There are plenty of superb candidates out there but Olivia Wilde is a dead ringer for Elektra. Tron: Legacy showcased her talents, looks and athletic prowess so she can do the role in her sleep.

Karen Page: At first seen as a traditional secretary who later became Matt Murdock’s girlfriend, Karen Page has had a tortured history in the comic books. She eventually fell from grace, became a junkie who sold out Murdock’s secret identity before finally being killed off. She’s a tortured soul who needs to be portrayed by an actress who is beautiful and can do pathos. Emilie de Ravin, as seen on Lost, can break ground by bringing Karen Page to life on the big screen for the first time.

Foggy Nelson: Matt Murdock’s law partner and best friend, Foggy seemed like the comic relief sorely needed by the grim comic book. But the slightly overweight lawyer was written as a complex, sympathetic person and one of Murdock’s strongest allies, who was often there for him when times were tough. Foggy Nelson shouldn’t be played strictly for laughs; check out the extended cut of the original Daredevil to get an idea of how he should be portrayed. For that reason, fan favorite Greg Grunberg seen in Alias and Heroes is an excellent pick for Foggy Nelson.

Daredevil/Matt Murdock: Casting the blind superhero isn’t an easy task. Directors can’t just go with any stud actor. The person to take over the role of Matt Murdock from Ben Affleck needs to present viewers with a man possessing inner toughness, while having a conflicted nature. At the same time, this actor has to be able to pull off the lawyer act, in other words, he needs to be believably smart and convicted. At one point, one of the assigned directors of Fox’s failed reboot was interested in Tron: Legacy’s Garrett Hedlund. Although he’d be fine as Murdock, a better choice would be James Badge Dale. For comparison check out his roles in 24 (he played Jack Bauer’s junior partner in season three), The Pacific and Lexicon. Dale has all the qualities needed to play Matt Murdock and Daredevil. 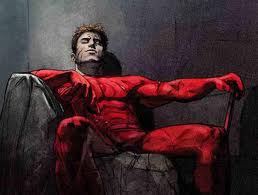 The following enemies while not as prominent as say Bullseye would still make interesting secondary foes in a Daredevil reboot. The right casting and writing would make them very memorable. Also, the evil ninja group The Hand must make an appearance at some point in a reboot.