All I read about DC Comics, these days, is what the New DC is…

DC’s Flashpoint the newest “event” series, is meant to last only six months. It will end at the end of August. This takes place in the screwed-up evil DC heroes universe, where Barry Allen, aka The Flash, is the only one who remembers the good ol’ wholesome DC universe.

This September, all of DC’s comics will relauch as #1, and this will be the new permanent DC. The comic book company says it’s not an “event,” not a prequel, a sequel or an alternate universe. For the current and next generation of DC readers, the DC universe starts here, in September. 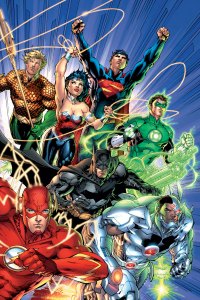 By the way, pick up the new DC’s Justice League, on sale Wednesday, August 31, by Geoff Johns and Jim Lee, who are the chief creative officers for DC Entertainment. The new DC will center around the first issue of Justice League#1 so this will start it all.

I could be wrong, but my guess is that in August, the Flash from Flashpoint, in his efforts to right what was wrong and go back to the old DC universe, never truly succeeds. Kinda like Old Spock from the 2009 Star Trek film. or maybe the readers get to see Flash make it back home, but that old DC universe is closed for readers. No more old universe. The end of Flashpoint I imagine will be the destruction of the Flashpoint Universe (which was truly dark, evil and edgy- darker than Marvel) and from September on, a new DC Universe will appear, and although it’s not as dark as Flashpoint, it seems to be way cooler than the old DC. I know DC wants to match the coolness of Marvel. DC will never portray the original DC Universe as the main universe again. It’s timeline and continuity, they believe, served its 70-year purpose.

And that’s the objective- by every one of these books relauching at #1, DC has the means to start fresh with modern sensibilities.

DC’s Crisis on Infinite Earths in 1986 did much of that, but back then, only Superman and Wonder Woman had a few of their books that relaunched at #1. And what they did then was consolidated dozens of Earths into just one. The 2011 DC Universe, is designed for readers who know nothing about DC, and is also designed for familiar readers. The reaction I sense from old fans is somewhat positive, maybe 70/30 split. But the majority of the old school readers who actively buy comics are approaching or are middle age. the new DC needs to maintain popularity with a fan base for young readers. With TV, movies, web, Youtube, videogames, and other adventure-based presentaions, comics have an uphill battle. And when guys discover girls, comics sustain a bigger loss LOL! In WWII, a single issue of Superman sold five million copies a month! A single monthly issue. These days Superman may sell only 30,000 copies, on a lucky month. And the majority of the readers today are aging fanboys.

BTW, all 52 new DC monthly titles will be available as a download or you can go to the stores and buy the paper comic. Digital download comics are undoubtedly the wave of the future. Every Wednesday, the latest DC comic will be available online and at the local comic shops. That’s a big step. According to DC editor Paul Levitz, digital download comics sell five times more than paper comics- that’s one reason why I believe this could work.

This new DC will work only if it attracts new readers, elementary school, middle and high school kids, who can click their iPhones to download the latest issue of Superman.  And these up and comers will need to want comics more than kids have in the last 30 years who had a ho-hum reaction to comic books up to now. This current generation (sometimes called millenials or Generation 9/11) has been raised on videogames, DVDs, the web, pop music and other entertainement that compete for the user’s attention against comics.
The majority of faithful comic book readers, historically fell into three groups–WWII-era young adults (young GIs stationed in Europe and the Pacific collected comics), baby boomers (who picked up their hobby from their parents) and those from Generation X. Any generation after that were less inclined to buy or collect comics. DC seems to be putting all their cards on the table for one huge gamble. If this doesn’t take off then this “relaunch” will be just another “event.”

Although it’s an uphill battle- these are the positives: it’s designed to be a new universe for new readers to jump in igital download for iPad, iPhone and Droid phones. There’s no need to walk into a store to get new DC comics every Wednesday. Of course this spells trouble for bricks and mortars businesses who will have to be innovative to survive.

So at the very least, the key to DC’s (and the comic industry overall)  survival is digital download sales, and the high likeleyhood that DC will make more profit than than in any given year in the last 20 or so years.