“Because the needs of the one…outweigh the many.”

Kirk to Spock on Vulcan 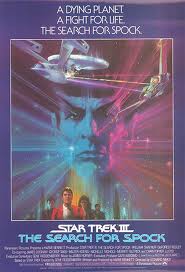 After the rousing Star Trek II: The Wrath Of Khan, its sequel Star Trek III: The Search For Spock feels like a bit of a letdown. It’s an entertaining film but it could’ve been a lot better and the cast and crew give it a good try. It can be difficult to state exactly what is wrong with film. It’s not dull like Star Trek: The Motion Picture and moves along at a brisk pace. More than the other two films, this one feels more like an episode of the original series thanks in part to director Leonard Nimoy’s obvious familiarity with the characters and situation. But a careful examination would have to conclude that the script needed another pass before filming began. The film feels disjointed at times and seems to be in a rush to go from one plot point to another; in the meantime some unanswered questions pop up about plot developments. 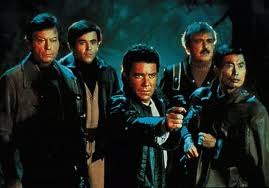 The film begins not long after Star Trek II: The Wrath Of Khan, the Enterprise is heading  back to Earth after Khan (Ricardo Montalban) and Spock’s (Leonard Nimoy) death. Commanding officer Admiral James T. Kirk (William Shatner) is visibly depressed over the loss of his friend. Most of the young cadets onboard the ship during the last film have been transferred elsewhere. Saavik (now portrayed by Robin Curtis because Kristie Alley and the producers couldn’t agree on a salary) has been assigned to a science vessel called Grissom orbiting the new Genesis Planet (after Khan detonated the stolen Genesis Device, it created the planet). Assisting her with researching Genesis is Kirk’s son, Dr. David Marcus (Merritt Butrick), developer of the rapid terraforming process that created the planet. Even though his mother, Dr. Carol Marcus (Bibi Besch), was a major character in the previous film, her absence in this film is never explained at all. In reality, writer and producer Harve Bennett needed to make budget cuts and felt her character wasn’t essential to the story. That was the first clue that the script was off.

Meanwhile, Dr. Leonard McCoy (DeForest Kelley) is behaving strangely, actually he begins acting like Spock and even sounds like him. But there isn’t any effort to get him any help.

The Enterprise arrives at a huge Spacedock orbiting Earth and sees the next generation of starships, the Excelsior, whose commandeered by an arrogant Captain Stiles (James Sikking). He would’ve been a good foil for Kirk but that is never explored. Throughout the film, members of Starfleet show an obvious disregard and disrespect toward Kirk and his crewmates that is a bit baffling and undercuts their supposedly legendary status. Perhaps they weren’t that highly thought of in their time.

Kirk and his crew learn from the commander of Starfleet, Admiral Morrow (Robert Hooks) that the Enterprise will be decommissioned because of its age. They are also ordered not to discuss the matter of Genesis, since it has become a political hot potato.

Spock’s father, Sarek (Mark Lenard) visits Kirk at his apartment and demands to know why he left his son’s body on Genesis and didn’t bring back his katra or his spiritual essence to Vulcan. According to Vulcan belief, when a Vulcan is dying, he or she mind melds with a close associate so that the katra can be transferred into that person. Both the katra and body are needed to give a proper burial and that if the katra remains with the associate it will mean that person’s death. The entire matter isn’t properly explained but that is the script for you. After looking at the Enterprise’s video logs, Kirk discovers that right before he died, Spock quickly performed a mind meld with McCoy. This explains the doctor’s odd behavior since he has Spock’s katra.

Kirk decides to risk everything to retrieve Spock’s body and soul because of his friendship. However, Admiral Morrow forbids Kirk from returning to the Genesis Planet and won’t budge. Kirk gets annoyed and resolves to go anyway as he tells the Enterprise helmsman Sulu (George Takei), “The word is no. I am therefore going anyway.” 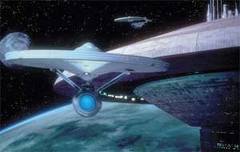 He frees an imprisoned McCoy slated to be turned over to a “Federation funny farm” because he tried to hire a ship to go to Genesis and his behavior has people convinced he’s insane. Kirk also steals Enterprise out of the Spacedock with the help of his crewmates Sulu, Scotty (James Doohan), Chekov (Walter Koenig) and Uhura (Nichelle Nichols). Apparently the only other ship in Spacedock that can pursue the Enterprise is the Excelsior, which is stopped dead in its track thanks to some sabotaging from Scotty. It seems odd that in such a space faring society, Kirk is unable to procure a private ship to go to Genesis. Stealing a badly damaged starship while fun to watch, fails to quell the question of why do it? The Enterprise needs repairs and will make an easy target. It would’ve made more sense if they quietly took another ship and snuck away.

While all this has been going on, David and Saavik have their own adventures on Genesis. After being allowed to beaming down to the planet to investigate a life sign, they find a young, mute Vulcan boy. They quickly deduce that it is Spock and that his body was regenerated by Genesis and is rapidly aging, although he lacks his katra. It doesn’t make much sense. Why would Genesis revert him back to a child instead of just reanimating his full grown body? But the trio on the planet have larger concerns, namely the planet itself.

It’s unstable, at first it snows in subtropical zones, then geologic disturbances ensues. David finally admits to Saavik that while developing Genesis he took a few shortcuts and used an illegal substance called protomatter in Genesis’ matrix. In this instance, David demonstrates that he has his father’s qualities but it comes out in a negative light.

They also have another problem; a Klingon commander named Kruge (Christopher Lloyd) learns about Genesis. His harsh, militaristic views can only see Genesis as the ultimate weapon that the Federation cannot have, so he unilaterally takes his Klingon bird-of-prey scout ship and heads to the planet to obtain its secrets.

Upon arriving, the Klingon ship accidently destroys the Grissom. Kruge then beams to the planet with a small party and captures David, Saavik and Spock. Leaving the prisoners under guard, he beams back to his ship in time to confront Kirk and the Enterprise. Anyone expecting an epic battle like in Star Trek II is bound to be disappointed.

The battle is short and leaves the Enterprise crippled. This again points to the wisdom of taking a badly damaged ship to Genesis. Kirk had to know he would’ve faced some opposition upon arriving, at the very least he needed a ship with good evasive capabilities. The admiral tries to negotiate a truce, but Kruge correctly construes that Kirk has a weak hand and demands a surrender or else he’ll execute his prisoners on the planet.

Demonstrating his resolve, Kruge orders one execution, and David is killed. This act comes the closest to breaking Kirk’s spirit and allows Shatner an opportunity to eloquently emote shock and grief.

Knowing that he’s outmaneuvered, Kirk surrenders. However, he beams down to Genesis with his small crew and self destructs his beloved ship as most of Kruge’s crew boards it. Once on the planet, Kirk and his crewmates make one last, desperate attempt to save Spock and Saavik, and turn the tables on the Klingons.

Compared to the adventurous nature of its predecessor, Star Trek III: The Search For Spock feels too somber and dry. It lacked Nicholas Meyer’s directorial skills, though Leonard Nimoy does a credible job in the director’s chair. Meyer would’ve been a natural pick but as part of his negotiations, Nimoy stipulated that he be the director. One can only wonder how it would’ve turned out if Meyer directed it instead.

But the biggest flaw has to be the screenplay. As I stated before, things happened without any nuance. The film moves from plot A to plot B without adequate reflection or impact. For example, Kirk too quickly decides to risk his career. McCoy is sick but wanders around freely, thus allowing himself to be arrested. Also, there isn’t any examination into Spock’s resurrection and its ethical dilemma. Such an event could’ve brought about a religious and cultural firestorm, not just on Vulcan but elsewhere as a means to cheat death has been found. Another rewrite could’ve dealt with this and described limitations. Spock also inexplicably stops aging once he leaves Genesis.

As for the Genesis Planet, if it’s under quarantine why is only one poorly defended science ship assigned there? Why not have a fleet or other defensive measures to enforce the quarantine? This lack of enforcement can only explain why the Enterprise and the Klingons are able to reach the planet so easily. One landmark moment is glossed over and that is the Enterprise’s destruction. Personally, I found this moment to be emotional given the ship’s long history and cultural impact (even a space shuttle was named after it) and because unlike Spock it wasn’t coming back. But after some words between Kirk and McCoy it’s on to the next plot point.

But Star Trek III: The Search For Spock has its merits. The production values are solid, and it introduced the ubiquitous Klingon bird-of-prey ship that has appeared in Star Trek’s incarnations ever since. Even though the film isn’t action packed, the final act is exciting and has Kirk at his most physical (while fighting Kruge) since the original show–although the fight could’ve used over-the-top music to heighten the moment. The acting is also very good, William Shatner gives a fine performance, as does Lloyd, whose Kruge is ruthless yet pragmatic and has a couple of quiet moments where he exudes remorse. But Kelley deserves the most credit not just for his sympathetic and humorous portrayal of McCoy but of Spock as well. His cadence and delivery captures Nimoy’s Spock excellently.

The film brings up several intriguing themes, namely the concepts of personal sacrifice and friendship, as well as how technology can be both good and bad, largely depending on how one interprets it. Genesis and its implications are given a darker look than in the previous film, as seen by Kruge’s reaction to it.

Bottom line, the film isn’t terrible; it’s interesting, but doesn’t have a rewatchability factor and that is strange given its content. It could’ve been a great film but falls short and that is a shame because all the essentials are there.