I really wanted to like Marvel’s Agents Of S.H.I.E.L.D., I really did. But after seeing a few episodes of the new series on ABC I have to admit that the show is a subpar, uninvolving disappointment.

Agents Of S.H.I.E.L.D. has many things going for it, at least on paper. Start with executive producer Joss Whedon, who created the great TV shows Firefly and Buffy, The Vampire Slayer. He directed the pilot episode and the megahit film The Avengers and he is one of the driving forces behind the show. For fans, it’s clearly set in the Marvel Cinematic Universe with its many references and name drops from various Marvel films. Also, the star of the show is fan-favorite Special Agent Phil Coulson (Clark Gregg), who turns up alive and well despite being apparently killed by Loki in The Avengers. That’s about it in terms of what’s good with the program. 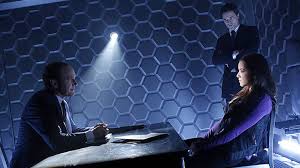 The problem with Agents of S.H.I.E.L.D. is that it commits two cardinal sins for genre fans; it’s dull and it’s a procedural-type of show. There are plenty of shows polluting the networks that are just like this one. Here’s the formula: the characters investigate some kind of crime, enter some forgettable guest stars, have everyone speaking in tech-ess that tunes out viewers and add in the Whedon touches. That would be adorably cute and perky female characters and actors speaking in a staged, witty manner. We’ve seen it all before and done better. Plus, in each episode there is an air of whimsy and lightness that doesn’t gibe with the situation in that world. What’s worse is that the light tone undercuts any sense of danger that is so badly needed with the episodes.

Agents Of S.H.I.E.L.D. takes place shortly after the movie, The Avengers. Society is dealing with the fact that superheroes and aliens exist in the world. S.H.I.E.L.D. (Strategic Homeland Intervention, Enforcement and Logistics Division) is a multinational agency that is a major player in the espionage field. Phil Coulson,

With the advent of superhumans, aliens and other oddities you would think that the team assembled to handle these new threats would’ve been more formidable. But no, we get a generic spy dude who has no presence, two techie nerds who ramble over each 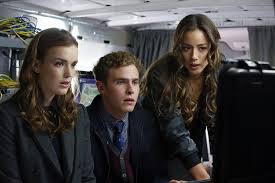 other in an unintelligible and irritating manner, and a Whedonesque spunky but annoying hacker who has no business working for S.H.I.E.L.D. Being that Skye is new to the club, we see the organization through her eyes, which is a setback since she is so grating. There is a subplot that she is a double agent for Rising Tide, an anarchistic group, but it’s ho-hum.  The only interesting characters are Coulson, whose main mystery is how he survived the fatal stabbing in The Avengers and May who has a mysterious past and is slowly being drawn back into field work.

Supposedly, the events in The Avengers was a major game-changing event in the world, or so the characters say. That’s a terrific springboard for a spy show about an agency that is keeping tabs on people with superpowers. But cases are so mundane and formulaic. Sure, I don’t expect to see major comic book heroes and villains appearing in the show, but characters with x-ray vision or who can shoot fireballs seems so routine when compared to the cinematic exploits of Iron Man or Thor. Putting that complaint aside, anyone who read the classic Strange Tales comic books that featured Nick Fury and S.H.I.E.L.D. will be asking the following question. Where are all the super cool gadgets, the intrigue, spy vs. spy exploits and super terrorist organizations like HYDRA that characterized writer/penciler Jim Steranko’s memorable comic book stories? There isn’t a sense with this TV series that we’re dealing with uber spies, just a bunch of nebbishes saddled with forgettable stories and too-cute dialogue. Not even a cameo by Samuel L. Jackson as Nick Fury was able to salvage an early episode. 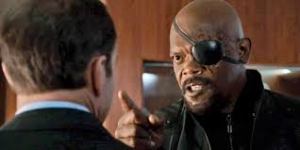 The only value Agents Of S.H.I.E.L.D. has at this point is to serve as a marketing tool for its cinematic counterparts. (An upcoming episode will tie in with the film Thor: The Dark World.) The problem with that is that the show’s failings are more evident when compared to the usually solid Marvel films. Agents Of S.H.I.E.L.D. should be able to stand on its own but it doesn’t. Perhaps, in future episodes the show will gain its bearings. But given the talent involved and the crowded TV landscape, it should’ve been roaring out of the gate and become must-see TV from the start.