The newest Planet Of The Apes film, Dawn Of The Planet Of The Apes is a direct sequel to the surprisingly great and captivating Rise Of The Planet Of The Apes. That film introduced audiences to the wonder of Caesar (mo-capped by the great Andy Serkis), the first speaking, super intelligent ape and his struggle against humanity. That strife continues with this new film that takes place ten years after the last one. Anyone who saw the last movie knew that in the wake of Caesar’s simian uprising, a genetically engineered virus accidently began to spread throughout humanity and this new movie shows us the aftermath of the pandemic.

Half the human population is gone, but remnants of society are struggling to rebuild. Dawn Of The Planet Of The Apes takes place in a ruined San Francisco, where a colony of humans plan to use a dormant hydroelectric dam to restore power to the broken city. What the humans didn’t realize is that a burgeoning civilization headed by super intelligent apes (consisting of chimps, gorillas and orangutans) occupies the land where the dam is located.

During a scouting trip, a group of humans led by Malcolm (Jason Clarke) encounters the apes. A tense standoff ensues that is ended when Caesar commands the humans to leave the primeval forest. Back in San Francisco, the leader of the colony, Dreyfus (Gary Oldman) wants to take an army and decimate the apes, but Malcolm recognizes Caesar’s intelligence and reason. He manages to buy time from Dreyfus to return to the forest and negotiate for permission to work on the apes’ land and reactivate the dam. Malcolm and his group return and manages to convince Caesar that they are peaceful and so the ape leader allows them to work on the dam, though he is very distrustful towards the humans.

There is a thick tension that hangs throughout this film as audiences wait for the fragile peace to break. But there are moments of quiet contemplation and reverence as Malcolm and the humans connect with Caesar and many of his apes. Of course, while many humans, especially those in the city, strongly dislike the apes, so too, do many apes harbor hostility towards the humans. Leading this contingent is the brutally ugly Koba (Toby Kebbell), who was briefly seen in the last film as a victim of lab experimentation. Koba with his ghastly scars has an unquenchable hatred towards humans and as Caesar’s second-in-command, cannot fathom why the simian leader is so lenient towards the humans. Shockingly enough, this distrust also extends to Caesar’s own son Blue Eyes (Nick Thurston), who provides an intriguing sub plot where he grapples with his own feelings towards humans. This is part of a spiritual tug of war between Caesar and Koba, as the latter ape uses deceit to bring Blue Eyes to his point of view.

Tragically, the truce fails and the film’s tension explodes as the apes begin an all-out war against the struggling human colony. Still, despite all the explosions and gunfire, the film allows for somber, reflective moments that underlines its soul and hammers home its messages. The apes are like humans in so many ways, including having a capacity for blind hatred, prejudice and bloodlust. Then again, many other apes display kindness and nobility just as many people do. The one ape that exemplified this innate goodness is Maurice (Karin Konoval), who is a wise and gentle teacher, and is able to see the good in humanity along with Caesar.

Dawn Of The Planet Of The Apes is undoubtedly one of the best films in the series. It boasts a captivating, violent story that entails how the apes were able to become the dominant species in the Earth. It’s not a simplistic Humans Bad, Apes Good morality tale; this film shows the nuances of how two civilizations collide and the desperate efforts from some on both sides to quell the bloodshed.

Of course, the mo-cap performances are just exemplary. The Academy Awards should already give Andy Serkis an honorary Oscar for his work here. But he isn’t the only actor who render terrific mo-cap performances. The above-mentioned actors equally bring their CG creations to life and have their souls shine through the computer generations. It allows audiences to connect with them as characters in their own right. 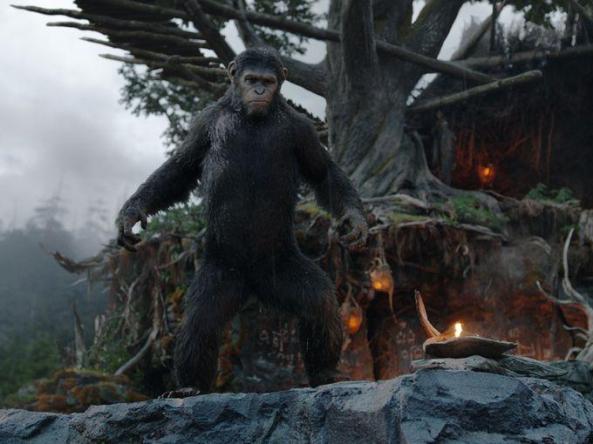 Another thing to be lauded is the production design that illustrates a world without man. While nature has reclaimed the land, a new civilization is emerging with its own morality. Even though it’s not human, many hallmarks of our society can be seen here. There is also so much brilliant imagery displayed here. The sight of seeing apes on horseback firing machine guns is bound to be a resonating vision. Thanks to that has to go to director Matt Reeves who clearly knows how to involve audiences. The writers Rick Jaffa, Amanda Silver and Mark Bomback should also be applauded for their work that naturally moves the Planet Of The Apes story forward. Needless to say, Dawn Of The Planet Of The Apes is one of this year’s best movies.