Vampires have been defanged lately. At least on TV and film. Both medium have been filled with overly romantic or brooding, misunderstood loners that filled the roles of the infamous night creatures. In reality, the vampires in Twilight and True Blood among other presentations were really just metaphors for social and emotional themes like teenage alienation, bigotry and even the gay rights movement. As good (or bad) as these presentations were, it was clear that the vampire mystique was diluted and strayed far from the creatures’ legendary horror roots.

Fortunately, The Strain corrects that problem by presenting the vampires in the TV show as the horrific and repulsive monsters they’re supposed to be.

Based on the book of the same name by Guillermo Del Toro and Chuck Hogan (both of whom executive produce the show as well), The Strain is starts off as a medical mystery but by the end of its first season is a straight up horror tale as a deadly 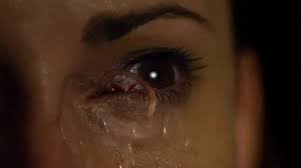 plague ravages modern-day New York City. In just a matter of days, many of the city’s inhabitants are turned into vampires by means of a quick-acting virus spread by aggressive parasitic worms. These tiny creatures are found in vampires and burrow into humans whenever a vampire bites them or simply by coming into physical contact with a vampires’ body fluids.

When infected by these disgusting worms that quickly multiply in the body, a person feels like he or she is suffering from a bad cold. In reality a horrid metamorphosis occurs where sexual organs atrophy and fall off, skin turns deathly pale and gray,  and a craving for blood ensues. By this time, the infected’s personality is largely gone, and are driven by a desire to ingest blood and pass on the virus. Infecting and draining someone else is done through a hideous, long tendril that shoots out of their mouths with grabbers and teeth at the end. Seeing this happen in each episode never loses its shock value and it’s very disturbing.

It’s a unique twist on the way vampires attack their victims and makes logical, pseudo-scientific sense. This method is somewhat reminiscent of the xenomorph creature in the Alien films with its elongated tongue that sports its own tiny, fanged mouth only the vampire’s tongue is much longer and faster. The way the vampires attack their victims takes away any notion of twisted romantic eroticism. The vampires in The Strain don’t try to seduce humans. They have no sexual interest in them and reproduce asexually by transmitting the worms. The end result is that the supernatural aspect of these bloodsuckers are downplayed and instead scientific explanations are given as to how they exist and operate.

Most vampires shown are nearly mindless 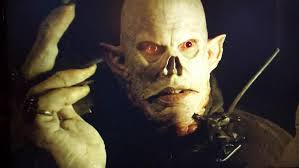 creatures driven by instinct. At best, the common vampires display a sort of hive intelligence and carry out psychic commands from the Master, the vampire leader. Meanwhile, a select few retain the personalities of their former lives and possess intelligence and the ability to talk. These special vampires are able to pass themselves off as human through elaborate makeup. That is because a fully fledged vampire has deathly grey skin, no hair, or nose and are bald with pointed ears. They’re also incredibly strong, quick and fast healing.

But Del Toro and Hogan didn’t just toss out all the old traditions with their takes on vampires. They do share a trait with the traditional vampires in that they lull many victims to let down their guards. This happens when a recently transformed vampire is drawn to a former loved one. The intended victim will see that the shuffling creature is acting odd and barely speaking. The vampire will swiftly attack and noisily drain the

victim’s blood using its tongue as a fleshy straw and leave the now-infected person in a death-like state. Shortly thereafter, the victim’s DNA is rewritten and the person is now a vampire. Also, the vampires on The Strain  have many of the traditional vampire weaknesses such as being vulnerable to silver and direct sunlight. The show’s heroes use the same tried and true methods of fighting vampires like sunlight exposure, blades for beheadings or silver. But innovative twists are used like UV lamps in the absence of sunlight and nail guns that fire silver nails.

The vampires in The Strain are innovative while being a throwback to their original portrayal across centuries. They’re hideous, disgusting and there isn’t anything romantic about them. They have more in common with the shuffling, mindless and disfigured zombies seen in TV shows and films these days. The end result is that the vampires have become something to be feared again.