Leonard Nimoy, who played Spock the first officer of the starship Enterprise on Star Trek, has died today at the age of 83.

Nimoy not only was renowned for portraying the stoic, emotionless Vulcan, but he was a noted film and TV director, photographer, musician and poet. Among his best known directorial pursuits were Star Trek III: The Search for Spock, Star Trek IV: The Voyage Home and Three Men and a Baby. The first two films helped to increase interest in Star Trek , which led to numerous successful spinoff films and TV shows. Nimoy also capitalized on his fame and appeared in or lent his distinctive deep voice to other well received TV shows and films like Star Trek: The Animated Series, Invasion of the Body Snatchers, A Woman Called Golda, Columbo, Mission: Impossible, Night Gallery, The Big Bang Theory, The Simpsons, Atlantis: The Lost Empire and The Outer Limits. He also hosted the ’70s paranormal documentary TV show In Search of…, which still has a cult following. His other prominent genre work was appearing as the enigmatic scientist Dr. William Bell in several episodes of Fringe.

But Nimoy will be best remembered for his 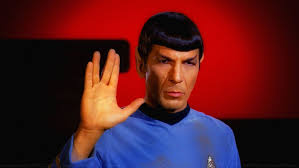 portrayal of Spock. The cool and logical alien on Star Trek was an instant hit with fans and helped popularize the fledging show back in the mid ’60s. Although Star Trek only lasted three seasons, the show’s popularity grew afterwards in syndication and has become an integral part of our modern culture. A large part of merit is due to Nimoy’s performance, which garnered him Emmy nominations. 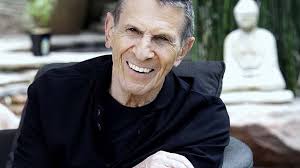 Still despite his fame, Nimoy was enigmatic about the benefits of having played Spock and feared being typecast. His ambiguous feelings led to him writing his famous autobiography I Am Not Spock. He was so ambivalent about the Spock character that he was hesitant to reprise the role when Star Trek was revived as a series of films. This was why Spock was killed off in Star Trek II: The Wrath of Khan, since the death would allow him to have some closure with the character. However, as we all know the film was so well done and Nimoy had a positive experience while filming it, that he changed his mind and was willing to continue playing Spock. This led to him directing the next two Star Trek films, the latter being considered one of the series’ best films. He also reprised the role in Star Trek V: The Final Frontier, Star Trek VI: The Undiscovered Country, two episodes of Star Trek: The Next Generation and in the last two Star Trek films. By this time, he had embraced the character and realized how it helped open other opportunities for him like his directing and artistic endeavors.

With his passing, we are again reminded how the past is slipping away from us being that three of the original Star Trek actors are now deceased. But his boundless legacy, which includes introducing the world to the most famous alien in sci-fi culture, will live long and prosper long far into the future.