For this year’s Spring Break, my family and I decided to spend the vacation taking a cruise. Not just any cruise…but a Star Wars cruise! Actually it was a vacation on the Disney Cruise Line ship Disney Fantasy and on one of the days at sea, onboard festivities were devoted to Star Wars. The cruise by itself was fantastic with impeccable service and amenities, in short, a Disney cruise is well worth the money and despite it not being a theme park visit you do feel the Disney experience.

The icing on the cake for myself, however, was the Star Wars aspect, of course. Even though the Disney Fantasy was themed after all things Disney, the presence of Star Wars was felt throughout the cruise even before the Star Wars Day at Sea. 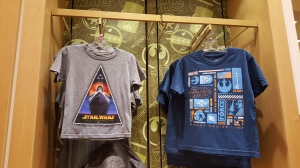 For starters there was the merchandising; the gift shops sold the typical Star Wars toys and paraphernalia that can be found just about anywhere on the planet. However, the stores did have moderate to expensive clothing, accessories and other keepsakes like art printings, t-shirts, shoes, magnets and bags. Then there were other collectibles near the ship’s theaters.

The Disney Fantasy has two theaters that played live musical productions and films as well. Of interest to fans was that the entire Star Wars saga was shown at various times throughout the cruise. It was a lot of fun sitting down and watching the films again on the big screen with like-minded audiences while munching on popcorn.

During the actual Star Wars Day at Sea, the Star Wars property took center stage, which was on a Wednesday, the halfway point of the cruise vacation. Throughout the Disney Fantasy, iconic music from the films were played and the ship’s horn blared out the infamous “Imperial March” at certain times of the day. Many passengers were decked out as their favorite Star Wars characters. Several took part in a costume celebration where they got to mingle with other fans or with the Star Wars characters that patrolled the ship.

The characters were well done and looked

authentic, but more importantly stayed in character. For instance, Jawas popped out of nowhere near the atrium and tried to steal jewelry and other personal effects from passengers (it was all in good fun, mind you). Villainous characters like Darth Maul or Boba Fett silently intimidated passengers as they posed for pictures. However, Darth Vader took the prize for the most authentic recreation. Not only was the costume spot-on perfect, but he actually spoke to one young member in my party with James Earl Jones’ distinctive voice as he mocked the rebels.

On the Star Wars Day at Sea both theaters hosted Star Wars-related events. At the Walt Disney Theatre, for most of the day the production/attraction seen at Walt Disney World and Disneyland called Jedi Training: Trials at the Temple was shown. This is the one where a Jedi Knight teaches young Padawans on how to use the Force to defeat Darth Vader (who also appears and fences briefly with each youngling). The other theater, the Buena Vista Theatre, presented a Guest Speaker Series featuring Joel Aron, the special effects guru for Star Wars Rebels. The same theater also had a Star Wars-related PowerPoint presentation called Star Wars 101, which actually helped members of my party get caught up on the intricacies of Star Wars and was presented with lots of enthusiasm.