WARNING: The following will discuss major spoilers in Captain America: Civil War, anyone who has not seen the film yet and do not want to be spoiled should stop reading from this point on.

Captain America: Civil War, like the previous Captain America films, has had a profound impact in the Marvel Cinematic Universe (MCU). The biggest fallout from the deteriorated relationship between Steve Rogers/Captain America  and Tony Stark/Iron Man being the disintegration of the Avengers team. 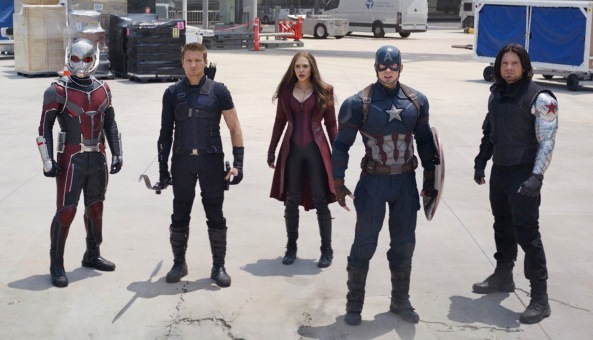 Naturally, we cannot expect this situation to last in the MCU. Despite the world’s animosity towards superheroes, it does need a superhuman team to take on the larger-than-life threats. What will likely happen in between this film and the next Avengers film is that the team will be reformed. As to who will make up the new Avengers is open for speculation.

But if the Marvel Studios films loosely follow what happened in the comic books then there might be two teams of Avengers in Avengers: Infinity War, Part I (at this point we don’t know what the film’s new name will be so let’s call it by its original title for now). In the Marvel Comics following the Civil War mini-series there were two Avengers teams, one was known as the Secret Avengers and operated outside the law and there was the “official” Avengers, which was later infiltrated with nefarious sorts and morphed into the Dark Avengers.

Avengers: Infinity War could roughly follow this development by having Tony Stark leading a new team composed of Vision, Wonder Man (Nathan Fillion will cameo as Wonder Man’s civilian identity of Simon Williams in Guardians of the Galaxy, Vol. 2, so he is a natural to play Wonder Man–a casting decision we foresaw years ago), a new Captain America, Captain Marvel (someone that the film’s directors, Joe and Anthony Russo, have suggested may appear), and someone new to the MCU perhaps She-Hulk or Tigra or even Black Knight.

Now the film could be about how the official Avengers are treated as celebrities, but the reality is that many of the new recruits are traitors. Think about it. This plot twist would be a variation of the Thunderbolts’ first storyline and Wonder Man’s initial appearance. When Wonder Man first joined the Avengers he was supposed to betray the team but had a change of heart and became an actual hero. The original Thunderbolts team was actually Baron Zemo and his Masters of Evil, who were pretending to be heroes. This twist could be unveiled to audiences who would be shocked that new recruits like Tigra or Black Knight are actually supervillains and Zemo was behind the scenes plotting this machination much like he did in Captain America: Civil War.

Meanwhile, Steve Rogers could adopt a new identity as either Nomad or the Captain as he did in the comic books. He would be without his shield, which he abandoned at the end of his third film. The new, evil Captain America (who can be Johnny Walker, the future U.S. Agent) could be the one wielding the shield while Rogers could use an energy shield like the one that Phil Coulson used in a recent Agents of S.H.I.E.L.D. episode. Of course, by the end of the film Rogers will rightfully regain the real shield. It could be given to him by Stark as a symbolic way of renewing their partnership.

Before that happens, Rogers will probably be leading his own clandestine team made up of Scarlet Witch, Black Widow, Ant-Man and the Wasp and Falcon.

So, Secret Avengers, Dark Avengers, what does any of this have to do with Thanos and the Infinity Gauntlet?

Perhaps Thanos’ team of the Black Order could show up on Earth looking for the final Infinity Stone, which happens to be embedded on Vision’s forehead. The aliens defeat the Avengers and take the Stone or are behind the betrayal. This would lead Stark and Rogers to realize they have to join forces to combat Thanos and the film ends. Cue the post-credits scene with a triumphant Thanos and his completed gauntlet.

Up next is Doctor Strange, which seems likely to be set apart from the traditional MCU. Unlike Ant-Man, do not expect to see an Avenger making a cameo in Doctor Strange. At best, there may be a reference to one of the Infinity Stones. The same situation will apply to Guardians of the Galaxy, Vol. 2. That sequel takes place in outer space and according to director James Gunn, doesn’t have anything to do with Thanos.

Then we have Spider-Man: Homecoming, the first Spider-Man film set in the Marvel Cinematic Universe. This film could connect to the events in Captain America: Civil War since Tony Stark is appearing in the film. For all we know, the film could pay tribute to the very first issue of The Amazing Spider-Man comic book where Spidey tried to join the Fantastic Four. In this film, the team he tries to join is the Avengers. Stark will give him a speech/pep talk that he is too young to join the team (never mind that he was old enough to take part in the airport battle in Captain America: Civil War). Or the issue of registration can be explored being that Peter Parker has superpowers and has to be registered. Expect a convenient loophole to take care of that matter (the age thing could play in nicely with a provision in the Sokovia Accords stipulating that registrants have to be 18 years old and over) with Stark bending the rules to keep Parker’s identity safe.

After Spidey’s homecoming we’ll meet up with Thor and the Hulk in Thor: Ragnarok. That third Thor film will take place outside of Earth and will have little to do with superhero civil wars and the Sokovia Accords.

Black Panther comes out in February 2018, a few months before Avengers: Infinity War. Do not be surprised if members of the Avengers (Secret or Official) make appearances to help bring in audiences like Ant-Man featured Falcon. If that is the case, and given T’Challa’s prominent role in Captain America: Civil War, there may be some exploration of the Sokovia Accords and perhaps some hints of Steve Rogers’ whereabouts. Remember that at the end of his film, Rogers is a fugitive. The most recent episode of Agents of SHIELD (“Emancipation”) confirmed that Rogers is indeed missing, though we know he was last seen in Wakanda.

What about the TV shows? Seriously, they have no relevance with the MCU films. When asked about including the superheroes from the TV shows in future films, especially Avengers: Infinity War, the big wigs at Marvel Studios get evasive and mumble nonsense about the difficulty of carrying this out. There are the real-world reasons regarding executive feuds and so on. But the fact is that ever since Agents of S.H.I.E.L.D. premiered, the characters and situations in the show (as well as with Agent Carter and the Netflix Marvel shows Daredevil and Jessica Jones) have not even warranted a mention in the films that came out since the TV shows premiered. The shows have referenced the films, especially Agents of S.H.I.E.L.D. towards the end of its first season which dealt with the collapse of S.H.I.E.L.D. following Captain America: The Winter Soldier.

In the episode “Emancipation” the crossover with Captain America: Civil War was perfunctory: the episode opened with a newscast about Rogers going missing and there was some lip service about the Inhumans working for S.H.I.E.L.D. having to register themselves per the Sokovia Accords. That was about it. It’s doubtful that when Luke Cage airs later this year that much time will be spent on the Accords or the Civil War. And it shouldn’t because the Netflix Marvel shows are very street level where the heroes are more concerned about local thugs and what is going in New York City. There may be a Spider-Man mention though since he, too, is based in the Big Apple.

Regardless of what happens with the TV shows, in the end, Zemo’s vengeful actions in Captain America: Civil War are spreading long-lasting and negative consequences with

the Avengers. Some critics have complained about Zemo for being an ordinary man. But that was what made his machinations so troubling. Of all the villains Captain America and the Avengers faced, he was the only one to take them down and he did so from within. The fact that he was just a vengeful man because his family was collateral damage from an Avengers battle makes his revelation at the end of the film so disturbing. We can empathize with his situation, but are horrified at how methodically he got the Avengers to go after each other’s throats.

This team disbandment is coming at a terrible time with Thanos on the horizon. The grave danger that he will bring to the world should be the catalyst to get Earth’s Mightiest Heroes to put aside their differences and confront Thanos. Storywise, the disbanding of the Avengers and Rogers’ crisis of faith is a perfect opportunity for self examination and dissemination. We see how they and the world are worse off divided and without purpose. Then the fun part comes when Rogers and the other heroes find a new cause and make the inevitable comeback.

It is ironic that when the MCU first started eight years ago, Iron Man was the core character, the prime mover. Now it is clear that Captain America has emerged as the primary hero in the Marvel Cinematic Universe and his actions has had the most influence. Given his heightened popularity with the general public, it can also be argued that Captain America has now become an A-list superhero. In that case, even though Marvel Studios has formally announced that the Captain America trilogy has concluded, Rogers deserves to have another solo film or two, which is possible since the actor Chris Evans has indicated he is willing to reprise the role after his contract finishes. We can only keep our fingers crossed and hope because there is more of Steve Rogers’ story that is worth exploring.