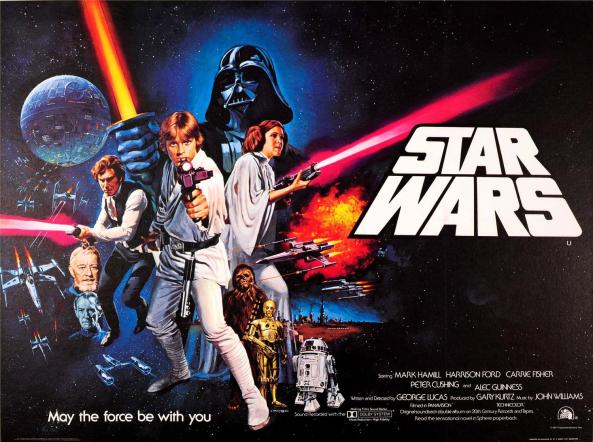 “A long time ago in a galaxy far, far away” those simple words, projected on movie screens, would herald a phenomenon in theaters on May 25, 1977. Forty years later, Star Wars is celebrating its 40th anniversary and just like the time when it was released, it’s as popular and beloved as ever. So what makes this franchise so iconic and successful? For starters, when the original film, which was later given the subtitle A New Hope, was released in 1977, the state of cinema was very different than today. With the exception of the Planet of the Apes films, there were no major blockbuster franchises. Sci-fi as a genre was stagnant and the only major film in this area was Stanley Kubrick’s 2001: A Space Odyssey from 1968 almost a decade earlier and the Apes films, which had wound down by the mid 1970s. Movies those days were dominated by dark and violent anti-heroes which reflected the cynical mood of society. Genuine movie heroes and feel-good films were a rarity before Star Wars.

The release of this swashbuckling outer space adventure transformed the landscape of films and singlehandedly reinvented genre films in the ensuing decades. It was a simple story of good vs. evil with now legendary characters like Luke Skywalker, the simple farm boy whose destiny would change the galaxy; Han Solo, the roguish space pirate turned into a rebel with a cause; Princess Leia, the indomitable leader of her people; Chewbacca, Han’s yeti-like buddy and partner in crime; Ben Kenobi, Luke’s wise mentor and warrior of the Old Republic; and everyone’s favorite robotic duo R2-D2 and C-3PO. All of them are instantly recognizable to literally everyone in the world. Their struggle against the most famous villain in movie history Darth Vader was set against a backdrop of a fully realized universe meticulously crafted by creator George Lucas.

The film director was inspired by classic myths and stories and successfully merged them into something new that was magical to audiences back then, and still feels that way even now. Basically, he took the timeless elements and themes from these tales and put it into an appealing and original backdrop. The settings were literally out of this world, yet had a gritty and realistic touch that made everything seem relatable. All that caught everyone’s attention, but what enchanted people the most were the interesting characters who we could identify with as they struck a chord within us. That is quite an achievement considering that many characters were not even human. To an outsider, Star Wars and its extraordinary trappings may seem bizarre but at its core it has easily relatable themes and subtexts.

Seeing how influential the film was and continues to be, it is baffling to ponder that many film studios passed on George Lucas’ pet project. Back then he was a young up-and-coming filmmaker and had a hit film, American Graffiti, under his belt. Yet, he had a hard time convincing skeptical film executives to greenlight his film. It seemed so strange to them, a space fantasy without any references to our civilization, one almost cannot fault them for not wanting to take the risk. But thankfully, 20th Century Fox saw the Lucas’ visionary potential and took a chance. Even then, few imagined Star Wars would explode like it did. That includes Lucas himself who hoped that his film would make just enough money to bankroll a sequel. Hardcore fans know that the original Star Wars novel that was released shortly after the film, Splinter of the Mind’s Eye, was supposed to be a low-budget Star Wars sequel. Of course, the monster success of Star Wars meant that Lucas could fully realize his vision of a sprawling galactic epic without any limits in terms of budget and special effects.

Another aspect that made Star Wars so hugely influential is that it had revolutionary special effects. The many scenes of outer space combat enthralled audiences with X-Wings and TIE fighters clashing in dogfights, along with the iconic shots of enormous Star Destroyers and let’s not forget Han’s Millennium Falcon, the faster piece of junk this side of the galaxy. They were such a spectacle to watch and entirely different from earlier sci-fi films that had cheap models hanging on strings. The editing and camera work was also incredibly done. Take for instance, the POV shot of Luke piloting his ship into the Death Star trench, it seems like you are flying right into the trench. The model and puppet work of the many aliens on the desert planet Tatooine in the famous cantina scene were also a real spectacle and added to the feeling that these were real places you were looking visiting. Many of these effects are rarely seen these days since Lucas took it upon himself in the 1990s to update the original Star Wars films with updated CG effects because the original effects work had become dated. Ironically, many of the CG effects now look dated themselves and proved how fruitless it was to tinker with classic films just to embellish them with the latest in special effects.

What Star Wars also accomplished was the film ushered in a whole new era of sci-fi and related genre films. This industry is still going on to this day. The huge success of Star Wars proved that genre films could be massive hits and led to other filmmakers and companies to try to do the same thing. As a result, sci-fi and fantasy films are now the major genre in Hollywood that studios all try to have in their portfolio to keep things going. We all know that the big tentpole films for studios these days are big-budget genre spectacles. The whole concept of having huge summer films with the accompanying merchandise, as well as the idea of ongoing sagas that span multiple movies and other media can all trace their paths back to that movie that came out on May 25th 1977.

It’s not an exaggeration to state that Star Wars basically caused a figurative earthquake not only movies but in the culture at large. Look around, you’ll see Star Wars everywhere. Certainly that is due to Disney, who after buying the rights from George Lucas earlier this decade for billions, wanted to get their money’s worth and went into merchandising overdrive. But this means that Star Wars will have a long-felt presence in our global society. As cynical as that sounds, keep in mind that in order for film to resonate long after it has left cinemas, it has to be great and unique. Star Wars is that and much more and is why it is so pervasive. For the few that have never seen Star Wars, even they know exactly who Darth Vader is and can pick out R2-D2 in a picture. That kind of recognition means that this movie has transcended its medium and, like other epic tales of old, has now passed on to the realm of legend.

4 comments on “A Long Time Ago In A Galaxy Far, Far Away: Celebrating The 40th Anniversary Of Star Wars”