Heroes aren’t born they’re developed, and Stan Lee created a universe full of Superheroes. It’s sad we have lost the greatest mind in the history of comics.

When I was young, I wrote to Mr. Lee with a storyline and an idea for a comic. Basically, it was about a cabbie who picks up Spider-Man characters like J. Jonah Jameson and Robbie Robertson and gets different viewpoints of Spidey. I also gave him an idea about doing a comic on how to create your own versions of Marvel costumes. I was surprised that Stan personally wrote back to me and actually liked my ideas. He gave me the names of the people I should contact at Marvel Comics. It was too bad that nothing came of it but I was grateful for Stan’s input and advice. 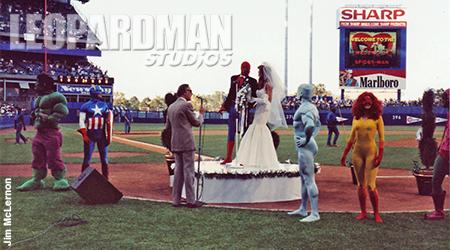 Years later, I actually got the meet Stan the Man at Shea Stadium, the former home of the New York Mets. Spider-man was getting married to Mary Jane Watson in the Marvel comic books and in the newspaper comic strips that Lee was writing at the time. He decided to have a wedding ceremony for the super couple the same week the wedding happened in the print versions. Back then I worked at Starlog magazine and we ran stories covering Spider-man’s wedding in Starlog and Comics Scene magazines.

I spoke to Lee after a photo shoot inside the stadium. I told him I had written to him and that he personally replied. He shocked me by saying he remembered the letter.

Stan wrote to us and said he enjoyed the stories and really loved the photos especially the one of him on the shoulders of his superheroes. He asked if we could send him a print copy, and we sent him a few 8x10s of the photos he requested. We were more than happy to do so, and it turned out to be a blessing. From that moment on, Marvel Comics always sent us press materials at a faster rate than before.

I later gave him copies of the other pictures when I saw him years at a NY Comic Con. I was thrilled that he loved them all.

Below is the story with some photos of our coverage of Spider-man’s wedding that appeared in the September 1987 issue of Starlog: 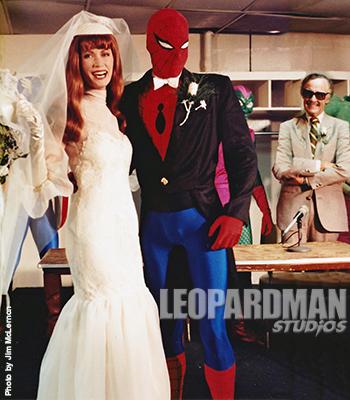 He has escaped the villainous clutches of Dr. Octopus, the Kingpin, the Hobgoblin, the Green Goblin and even Kraven the Hunter, but the friendly neighborhood Spider-man was finally snared on June 5, 1987 before a sellout crowd of 51,402 at New York’s Shea Stadium.

The superhero’s co-creator Stan Lee was there to join the web-slinger to his longtime love, model/actress Mary Jane Watson in weblock. The wedding party included Spidey super friends Firestar, Iceman, the Hulk and Captain America. The Green Goblin made a rare return-from-the-dead appearance. The bride and groom entered through centerfield in separate limousines, making their way to the white heart-shaped altar from which Stan the Man presided over the ceremony.

“Now, in the sight and presence of a coterie of our other costumed crusaders, please prepare to recite your vows,” announced Lee. “Do you, Spider-man, being of sound mind and super body, take Mary Jane to be your lawfully wedded bride, forsaking all other superheroines? Do you promise to never leave footprints on the ceiling, or cobwebs in the corners? And do you agree to pinch-hit for the Mets if they ask you?” Spider-sense tingling, the groom replied, “I do.”

“Mary Jane, do you, being of sound mind and spectacular body, agree to forsake other masked Marvelites,” Lee continued, “to never, ever swat a spider, and to hug, comfort and kiss away any bruises incurred after a long day of bashing bad guys—and stay out of the Mets’ locker room?”

After a moment’s thought, Mary Jane echoed, “I do.”

“The rings please,” said Lee, “Repeat after me—With this ring I thee web,” and both participants did so.

“By the power vested in me by Marvel Comics,” said Lee, “I now pronounce you Spider-man and wife. You may kiss the bride.”

With this, Spidey carried the new Mrs. Peter Parker off to their limo and they drove off to tumultuous applause. The remaining superheroes and villain hoisted Stan Lee on their shoulders and carried him off the field.

I’ve always treasured those memories of meeting Stan and am touched that he loved those photos. It was a small way of giving thanks to him in person for all that he has done for us and the Marvel Universe.

Thank you, Stan for creating a whole universe.

Stan Lee was the greatest superhero pop culture celebrity and the last of the great original co-founders of Marvel Comics.

He gave us characters and stories that strongly resonate with us even to this day. He was a powerful storyteller whose literary ideas and words would pair up with talented visual artists. Together, they would come up with colorful heroes and wild adventures that are recognized all over the world.

On a personal note, I met him a couple of times in the comic book conventions.  On both occasions he was as we always saw him to be—energetic, and quite inspirational.

I first met him at a NYC convention in the mid 80s. There was a huge line to meet Stan even back in those days, but I didn’t wait for long. When I finally had the moment to say hi and take a picture with him, he also gave me some great advice about improving my little art sketches and doodles.

For someone who changed the course of pop culture, Stan enjoyed being playful about his celeb status. He really was both insightful and self-deprecating, and sincerely enjoyed being with the fans.

Thank you, Stan for providing more than seventy years of heroes winning the day.