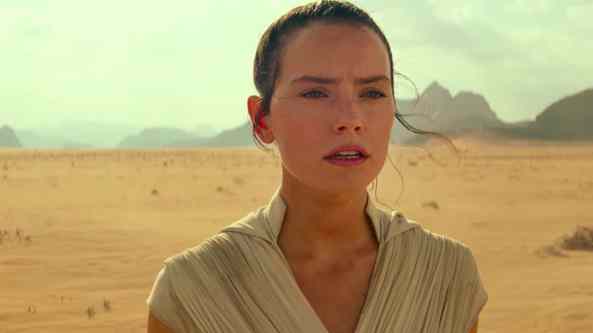 With the release of the first teaser trailer for the latest Star Wars film, Star Wars Episode IX: The Rise of Skywalker, one thing about the title is raising many questions. Chiefly, whom is the title referring to? Luke Skywalker, Anakin Skywalker, Leia Organa? Or is Rey herself a Skywalker?

Consider this, technically there are only two Skywalkers left and their last names aren’t even Skywalker. That is Leia and her son Ben Solo/Kylo Ren. So are either one of them the person in the Star Wars title? Thinking about it, not likely. Due to Carrie Fisher’s untimely death a couple of years ago before this film began filming, her screen presence will be limited. As for Kylo, unless he pulls Vader-in-Return-of-the-Jedi act and renounces the Dark Side of the Force, he isn’t the Skywalker either. Besides he is a Solo.

A popular and logical theory going around is that it’s Rey. She has no family and her past is mysterious, even to her. The only problem is that according to the previous Star Wars saga film, she came from a family of nobodies. This revelation disappointed fans who were hoping that the mystery alluded to in Star Wars: The Force Awakens would lead to her being a long-lost Skywalker. But given how divisive Star Wars: The Last Jedi was, and based on the nostalgic tone of Rise of the Skywalker trailer, it looks like the new film will retcon The Last Jedi to the relief of many. So we may learn that Rey is part of the Skywalker family, but who’s child is she? Luke and Leia with their affinity to the Force didn’t acknowledge her as a relative. But who knows with the new film?

Could it be Luke Skywalker coming back from the dead as an advanced Force ghost? He is very powerful in using the Force and would have the ability to do so as Yoda and Obi-Wan hinted in the past. Or is this person some other lost child (and no this does not mean that slave kid at the end of The Last Jedi) that we haven’t met yet? Doubtful. What if it’s Anakin coming back as a Force ghost to right the wrongs committed by Ren and the First Order? That could happen, but there hasn’t been any reports of Hayden Christiansen on the set of the film.

Star Wars Episode IX: The Rise of Skywalker could be referring a cause, a movement instead of a person.

Star Wars: The Last Jedi made a big deal over how the Jedi were extinct and even Luke Skywalker wanted the order to wither away because of his failure over Kylo Ren’s rise. But as we know, at the end, Luke had a change of heart and proclaimed that he was not the last Jedi and it was up to Rey to carry the torch. She was shown to have taken the Jedi texts with her so she could learn from them, but she never passed the trials to become a Jedi.

It’s possible that like the Sith, the Jedi are indeed gone, never to return. But in a new and better order will take its place and it will be called Skywalker. Think of it as Buddhism or Christianity. The religions are based on the philosophies of two influential people, Buddha and Jesus Christ. It’s possible that an order called Skywalker will be more about keeping balance in the Force and will spread by the end of the film. Followers of the movement will be inspired by Luke and Rey’s actions as they carry out a crusade to wipe out the First Order and bring peace and justice throughout the galaxy.

This is just a thought, a mere speculation, but keep it in mind when going to see Star Wars: The Rise of Skywalker later this year and by watching the teaser trailer below.

5 comments on “The Identity Behind Star Wars: Rise Of The Skywalker”