Lately, headlines announced some issue or another befallen one Arrowverse TV show after the other, and this gives the impression that  the Arrowverse TV shows are in trouble. It seems collectively, the superhero shows hit their peak earlier this year with the crossover event “Crisis on Infinite Earths”, and things largely went downhill from there.

This is just a broad generalization, some of the Arrowverse TV shows are doing fine, namely Black Lightning and Stargirl, but there is a sense that these superhero shows have run out of steam and feel dated.

Arrow, the show the live-action DC superhero TV universe is named after, concluded its eight-season run earlier this year, just as it had found renewed energy. The reason the show ended was because the main actor who played Green Arrow, Stephen Amell, wanted to leave to resume a more normal life. For anyone, who doesn’t know, these shows are filmed in Canada, which requires the cast and crew to be away from their families. Arrow was justly celebrated when it ended, but there were questions of how the the Arrowverse would continue without its flagship show. Other shows like The Flash have eclipsed Arrow in terms of popularity and ratings, but the Arrowverse still seems empty without Green Arrow stalking around in the dark alleys telling bad guys “You have failed this city!”

Older, remaining Arrowverse shows such as The Flash, Legends of Tomorrow and Supergirl are running low on creativity. For the most part, the episodes and scripts are bland and uninspiring. The Flash ended its season with its main character no longer having his natural powers and his wife trapped in another dimension. But it was so dull and shrug inducing. The Flash has had problems in recent years with coming up with engaging villains and story arcs. For too long, the show relied on evil speedsters, but the new batch of villains are just blah. Then there is the undeniable fact that the actors seem bored and going through some drama, which will be covered shortly. It is just a shame, given the excitement most fans felt for the show and its lead character after the thrilling encounter between the TV version of the Flash with his DCEU counterpart during “Crisis on Infinite Earths”. The crossover event was supposed to provide a new spark of creative energy but very little has happened aside from some Flash villains being reimagined and not very well; although Lex Luthor’s revamping in Supergirl was interesting.  At the very least the meeting between the two Flashes rekindled interest in the upcoming movie version of the Flash.

Legends of Tomorrow is a mere shadow of its initial premise: C-list superheroes who time travel to get some respect. That is still there somewhere but it has been buried lately in these nonsensical magic-related plots and most of the original cast is gone. Some of the replacements are not very compelling, though to its credit Legends of Tomorrow does a decent job of being goofy and funny. Some episodes are very humorous and the show wisely figured out long ago not to take itself too seriously and embraced its comedic tone. However, other shows like Doom Patrol overshadowed Legends of Tomorrow by being quirkier and more insightful superhero shows.

That is probably the main reason the shows are suffering greatly. When Arrow and The Flash first debuted in the early ‘teens, they had the TV superhero landscape for the most part to themselves. Arrow was a more grounded superhero show that tried copying that dark and brooding nature of the Christopher Nolan Batman films, and despite its limitations, Arrow worked. Then it started introducing more fantastical elements which did not work out too well and the show did not fit in well with the other more imaginative Arrowverse shows. But other non-Arrowverse shows came along and raised the bar, namely the Marvel Netflix TV shows such as Daredevil and Jessica Jones. These shows were much darker, with better fight scenes and superior production values. The envelope has been pushed further with more recent shows like Legion, The Boys, Titans and Doom Patrol, and now new shows will come out that will raise the bar even more: the Disney+ superhero shows and even Green Lantern and Strange Adventures on HBO Max, all of which promise to have huge budgets and top production values and actors. In comparison, the Arrowverse seems quaint, cheap and dated.

There have been more troubling developments. In Batwoman, the main actor, Ruby Rose, left the show after only one season and the showrunners are scrambling to find a replacement Batwoman. There is controversy over her reasons for leaving Batwoman; it has been rumored that Rose was actually fired, or it could be due to her grueling filming schedule. Whatever the reason, the show, which received a mixed reaction, has a large burden to deal with.

Even more disturbing was the recent news that actor Hartley Sawyer, who played the Elongated Man in The Flash, was fired from the show because of discovered racist and misogynistic tweets he made years ago. It does not stop there, there has been an outcry from some fans that the same show fire actor Danielle Panabaker, who plays Killer Frost, for allegedly being racist. The evidence for this has to be more thoroughly examined but however this ends, this is not good publicity for The Flash, the new flagship show of the Arrowverse. 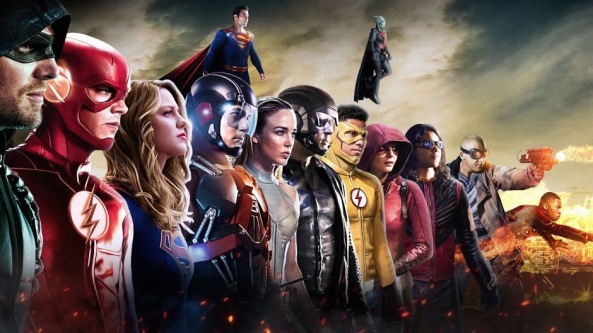 What can be done for the Arrowverse TV shows? Perhaps nothing. Let things play themselves out. Ordinarily, these shows would have ended their runs seasons ago before they became stagnant, but since they air on The CW, they can go on forever. But it seems certain that these shows are reaching the end of their line. Actors are leaving, contracts are up for renegotiations while ratings dwindle and the buzz fades. There are other, fresher shows on the horizon or currently airing. Stargirl, Doom Patrol and Titans technically take place in the multiverse as seen at the end of “Crisis on Infinite Earths” and they’re run by Greg Berlanti, the same executive producer behind the Arrowverse shows. In a sense the Arrowverse will still go on, just with new characters and situations. However this plays out, the Arrowverse needs to be remembered for its merits and helping to usher in a new age of superhero TV shows.

10 comments on “Crisis With The Arrowverse TV Shows”