One thing that was noticed while scavenging Hallmark stores for discounted ornaments were the abundance of Star Trek ornaments. This was unusual, most of the time a fan was lucky to find a spaceship ornament the day after Christmas. 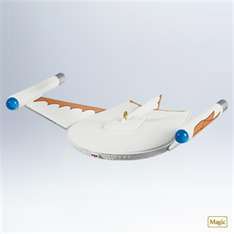 Well there are plenty of Romulan Bird-of-Prey spaceships available in several stores. Meanwhile Boba Fett’s Slave I spaceship from Star Wars is impossible to find. That is surprising given that a version of Slave I was released in 2002. The original was heavy and hard to put up on the Christmas tree since its weight pulled down branches. It was painted in blue to reflect that it was the one seen in Star Wars Episode II: Attack Of The Clones and it didn’t have sounds or lights. This year’s model was painted green as seen in The Empire Strikes Back and had sound.

Regarding the characters this year, Star Trek couldn’t even compete. Hallmark released two separate ornaments: one of Spock, the second in their Legends of Star Trek series, and a diorama featuring a scene out of the classic episode “Mirror, Mirror.” With Star Wars, three ornaments were produced, one of Yoda that has sound, a limited edition of Bossk that sold out quickly when released earlier this year and a diorama featuring Han Solo’s confrontation with Greedo. The only one still seen in stores was the diorama and that was in small quantities.

So is this further proof that Star Wars is clearly edging out Star Trek in popularity at least when it comes to ornaments? There was a time when Trek ornaments were highly sought after items. The very first Hallmark ornament of the original Enterprise still commands a high price in secondary markets as does practically any Enterprise ornament. Yet some character ornaments and ships are duds.

But this year’s plethora of Romulan ships is startling given that even in years when clunkers were released (namely the Borg cube, the Rio Grande runabout, the Scorpion fighter ship and the Vulcan command ship) they were hard to come by after Christmas.

The glut of character ornaments isn’t that surprising.

When it comes down to it, the Star Wars character ornaments are almost always more interesting and dynamic. Whereas the Trek ornaments feature basically humans in drab poses, the Star Wars characters are very colorful and larger than life. This isn’t meant to revive the old Trek vs. Wars debate, it’s just to point out that there is a disparity between the two franchises lately when it comes to ornaments. The first Trek character ornaments looked more interesting and featured them in various poses. Like this Spock ornament released in1996. 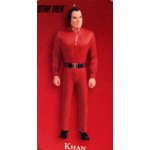 With this one of Chewbacca: 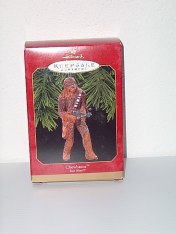 Now ask yourself which makes a better ornament? A better looking gift for collectors?

Let’s be clear, Star Trek ornaments are not doomed. It is possible to put out ornaments that capture the fans’ eye. The ship ornaments from the past three years (the Reliant, a Klingon battle cruiser and 2009’s Enterprise) looked fantastic and were difficult to obtain after the holidays. And by looking at older diorama scenes and characters anyone can tell that Trek has plenty of life left in it when it comes to ornaments. Trek has a vast library and history with viable subjects. Star Trek: The Experience in Las Vegas used to sell ornaments featuring aliens from the shows, Hallmark should consider that at least trying the aliens or obscure ships as a limited edition trial balloons or convention exclusives.

Here is a list of what Hallmark could produce in the next few years. Add to the list any ship or character introduced in any upcoming film or show.