Ruining the good vibe from the recently released Guardians Of The Galaxy trailer, 2oth Century Fox had to go ahead and throw this turd sandwich at genre fans. The cast for their reboot of the Fantastic Four will include Miles Teller as Mr. Fantastic (gee Josh Trank, thanks a lot for lying to us since this past summer by denying Teller was in the running for the role), Michael B. Jordan as the Human Torch (the PC casting of the year), Kate Mara as the Invisible Woman (the character should go back to being called Invisible Girl given how young this actress looks) and Jamie Bell as the Thing (ooh, this guy sure looks tough!). Forget about Jesse Eisenberg playing Lex Luthor. These are the worst casting choices for a superhero film since Halle Berry played Catwoman and Jennifer Garner paraded as Elektra.

Just seeing these people together makes me physically ill. This does not look like the Fantastic Four to me, but like a bunch of kids playing superheroes in a school play. Honestly, we were better off with the Tim Story version of the Fantastic Four, hell, even the cast from Roger Corman stillborn version looked better than this bunch.

It’s pretty clear that Fox and Trank fail to grasp the essence of the Fantastic Four. They are a dysfunctional 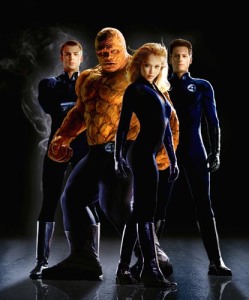 family unit, Mr. Fantastic is the father figure, the Thing is the grumpy uncle, Invisible Woman has the big sister/mother hen role, and the Human Torch was the brash young kid of the group. This cast looks like they’re just now able to legally buy alcohol. At least with the Tim Story Fantastic Four films, the cast filled out those roles to different degrees of success. Yeah, I’ll admit Julian McMahon and Jessica Alba were the most miscast actors in the bunch, but the rest captured the essence of their roles well. Say what you want about Ioan Gruffudd, but he did a fine job as Mr. Fantastic. OK, so he wasn’t the most dynamic character, but Mr. Fantastic is supposed to be a stoic, intellectual type and Gruffudd showed that. Miles Teller doesn’t look like the brainy type, but as the kind of kid who plays pranks on others. And Mr. Fantastic is supposed to be approaching middle age, that’s why he’s the father figure. You’re not going to get that from this whippersnapper!

What is more troubling are the rumors that Dr. Doom will probably be played by a woman (Lady Doom?!), and worse the leaked premise which goes against the traditional version of the team. Supposedly, Mr. Fantastic and the Thing got their powers as kids and were used by the government as living weapons! Then later on they meet the brother and sister team of the Human Torch and Invisible Woman. I’m just groaning right now thinking about this. I can understand wanting to update origins by making changes. But the core of the character and his or her situation must remain the same.

Look at Iron Man, Spider-Man and Superman. Their films had major changes done with the characters, but they were basically the same people that fans loved. Iron Man wasn’t born in the jungles of Vietnam as in the comic books but rather in Afghanistan. He was still a pompous a-hole who had to learn some humility because of his heart problem. The two film versions of Spider-Man were different with their origin stories; his Uncle Ben’s death was more tied in with Spider-Man’s callous behavior. The people he went to school with have changed from the comic books. Liz Allen is absent while Gwen Stacy and Mary Jane Watson in both film versions have filled in that high school sweetheart role. But the core of Spider-Man is the same: a geeky loner kid who gets super powers and doesn’t become a hero right away. With last year’s Man Of Steel there were changes done to Superman’s origin: his father dies in a tornado, Zod killed his biological father, but the main gist of Superman was intact. He was still an alien infant sent to Earth from a dying world and he grows up to become a superhero. Does it look like we’ll get a version of the Fantastic Four that is true to their nature with this reboot. Not likely!

I don’t like the idea of rooting for a superhero film to fail. But this just feels all wrong and at this point I refuse to reward Fox by spending my hard-to-get money on this upcoming movie. Why couldn’t the

Superman/Batman film come out next summer as originally planned? At least the hoopla for that would’ve drowned out this reboot. So after The Avengers: Age Of Ultron, the next superhero film on my radar will be Ant-Man, because I’m bypassing this stinkfest altogether. The worst thing about this pending fiasco is that Marvel Studios won’t be getting back the rights for the Fantastic Four. Let’s all pray this reboot bombs at the box office so that Marvel can regain the rights quicker and eventually produce a more genuine version of the team that sticks to its roots.

So thanks a lot Fox for spoiling my morning. “Sigh,” I just hope Stan Lee doesn’t do a cameo in this DOA production.