Guardians Of The Galaxy is the perfect embodiment of the summer film. It’s fun, exciting, explosive, and it has the right balance of humor, action and drama. It’s also a big risk for Marvel Studios who until this time produced relatively safe  adaptations of their superhero comic books. Guardians Of The Galaxy doesn’t feature any big-name heroes and it can’t be considered a superhero film but a straight up space opera. Fortunately, Marvel Studios pulled it off in a spectacular way.

One of the many reasons why Guardians Of The Galaxy works so well is due to its main character Peter Quill (Chris Pratt). He is cut from the roguish Han Solo/Mal Reynolds cloth, but with a huge helping of John Crichton thrown into the mix and a pinch of Indiana Jones. We’ve seen his type before, a bumbling, lovable thief/smuggler, who is looking for the next big score, but in the end decides to do the right thing. Even though his character type is familiar, Peter connects with us thanks to Pratt’s sincere and goofy performance and his surprisingly deep emotional makeup. The script (by director James Gunn and Nicole Perlman) takes time to show elements of his past, which explains Peter’s motivations and behavior.

Abducted from Earth as a young boy, Peter, who goes by the moniker Star-Lord, lives a scoundrel’s life in the galaxy while listening to oldies pop music on his vintage Walkman.  When Guardians Of The Galaxy begins, he breaks into an abandoned temple on an alien planet and steals an orb that is coveted by very powerful factions. The worst being Ronan (Lee Pace), a proud Kree warrior who is aghast that his race is now at peace with a rival space power, the Nova 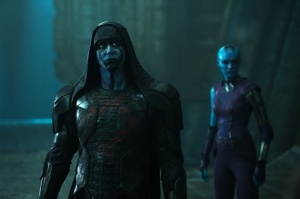 Empire. He wants what is inside the orb, an Infinity Stone, a MacGuffin that grants its user deadly power to destroy. Fans of the Marvel Comics know that it’s part of the gem set used to form Infinity Gauntlet, used by the evil madman Thanos to cut a path of destruction across the universe. Ronan is just a lackey of Thanos (who is briefly played by Josh Brolin), and is tasked to retrieve the stone. Over time, Ronan decides to defy Thanos and use the stone to destroy Xandar, the home planet of the peaceful Nova Empire. END_OF_DOCUMENT_TOKEN_TO_BE_REPLACED