The myth and aura of President John F. Kennedy has permeated many aspects of our culture, including the worlds of fantasy and science fiction. This is due to the circumstances of his tenure as U.S. president and his assassination. Even though the Space Age began before he took office, JFK helped invigorate the nation’s space efforts with his pledge to land a man on the moon by the end of the ’60s. His short time in office also saw the closest moment to date of a full-scale nuclear war with the Cuban Missile Crisis. Then there is the tragedy of his assassination that even today is fraught with controversy.

Needless to say, almost all of these stories have to do with either time travel scenarios or alternate history. Often, the time travel yarns lead to alternate timelines where the slain president is never killed in 1963. Ironically, it turn out that JFK living past that fateful day usually leads to a disastrous timeline. It’s interesting to note this considering the admiration that many have for the slain leader. Of course, the reason is because these stories need some drama. 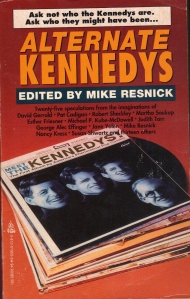 There are too many sci-fi and fantasy books to list here that explore JFK and altered history. Some notable entries include Alternate Kennedys, a collection of short stories that featured alternate history accounts, as well as decidedly fantasy and comedic tales of JFK and his family. Some of the better stories in that collection are “The Winterberry”, “The Kennedy Enterprise” (in this tale, the Kennedy brothers are the big stars of a famous sci-fi TV franchise), “A Fleeting Wisp Of Glory”, and “Prince Pat”.

Stanley Shapiro penned a time travel book called A Time To Remember, which was made into a TV film Running Against Time that starred Robert Hays as a professor who wants to save his brother from dying in the Vietnam War. So he goes back in time to save JFK and thus prevent that war from happening.

Another novel about JFK living past 1963 being detrimental to history is Prologue by Greg Ahlgren. In this book, JFK never died and wound up pulling out of Vietnam. This decision led to the communistic takeover of the world, causing the book’s protagonists to travel in time back to JFK’s era and rewrite history.

One recent, high-profile work is Stephen King’s novel 11/22/63 where the story’s main character time travels to the past and stops Oswald. The resulting timeline leads to George Wallace, and later Hillary Clinton, into becoming presidents and the Vietnam War escalating into nuclear war.

Putting aside the fantastic novels and stories, recently many historians have written essays and books seriously exploring alternate timelines about JFK. Many of them are well worth reading for history buffs and fans of alternate history. The most recent example is If Kennedy Lived: The First And Second Terms Of John F. Kennedy: An Alternate History by Jeff Greenfield, a followup to his essay collection Then Everything Changed. In that latter collection of essays, Greenfield explored a timeline where Kennedy was killed before he was inaugurated. This terrible event led to the Cuban Missile Crisis becoming a nuclear war.

Getting back to fiction, there are novels about  alternate versions of the Cuban Missile Crisis. In these accounts the crisis turned into full-scale nuclear war between the U.S. and the Soviet Union, leading to terrifying results. They include Resurrection Day by Brendan DuBois and When Angels Wept: A What-If History Of The Cuban Missile Crisis by Eric G. Swedin. END_OF_DOCUMENT_TOKEN_TO_BE_REPLACED