The myth and aura of President John F. Kennedy has permeated many aspects of our culture, including the worlds of fantasy and science fiction. This is due to the circumstances of his tenure as U.S. president and his assassination. Even though the Space Age began before he took office, JFK helped invigorate the nation’s space efforts with his pledge to land a man on the moon by the end of the ’60s. His short time in office also saw the closest moment to date of a full-scale nuclear war with the Cuban Missile Crisis. Then there is the tragedy of his assassination that even today is fraught with controversy.

Needless to say, almost all of these stories have to do with either time travel scenarios or alternate history. Often, the time travel yarns lead to alternate timelines where the slain president is never killed in 1963. Ironically, it turn out that JFK living past that fateful day usually leads to a disastrous timeline. It’s interesting to note this considering the admiration that many have for the slain leader. Of course, the reason is because these stories need some drama.

There are too many sci-fi and fantasy books to list here that explore JFK and altered history. Some notable entries include Alternate Kennedys, a collection of short stories that featured alternate history accounts, as well as decidedly fantasy and comedic tales of JFK and his family. Some of the better stories in that collection are “The Winterberry”, “The Kennedy Enterprise” (in this tale, the Kennedy brothers are the big stars of a famous sci-fi TV franchise), “A Fleeting Wisp Of Glory”, and “Prince Pat”.

Stanley Shapiro penned a time travel book called A Time To Remember, which was made into a TV film Running Against Time that starred Robert Hays as a professor who wants to save his brother from dying in the Vietnam War. So he goes back in time to save JFK and thus prevent that war from happening.

Another novel about JFK living past 1963 being detrimental to history is Prologue by Greg Ahlgren. In this book, JFK never died and wound up pulling out of Vietnam. This decision led to the communistic takeover of the world, causing the book’s protagonists to travel in time back to JFK’s era and rewrite history.

One recent, high-profile work is Stephen King’s novel 11/22/63 where the story’s main character time travels to the past and stops Oswald. The resulting timeline leads to George Wallace, and later Hillary Clinton, into becoming presidents and the Vietnam War escalating into nuclear war. 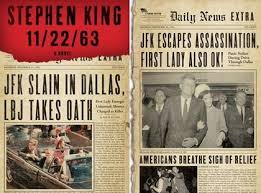 Putting aside the fantastic novels and stories, recently many historians have written essays and books seriously exploring alternate timelines about JFK. Many of them are well worth reading for history buffs and fans of alternate history. The most recent example is If Kennedy Lived: The First And Second Terms Of John F. Kennedy: An Alternate History by Jeff Greenfield, a followup to his essay collection Then Everything Changed. In that latter collection of essays, Greenfield explored a timeline where Kennedy was killed before he was inaugurated. This terrible event led to the Cuban Missile Crisis becoming a nuclear war.

Getting back to fiction, there are novels about  alternate versions of the Cuban Missile Crisis. In these accounts the crisis turned into full-scale nuclear war between the U.S. and the Soviet Union, leading to terrifying results. They include Resurrection Day by Brendan DuBois and When Angels Wept: A What-If History Of The Cuban Missile Crisis by Eric G. Swedin. END_OF_DOCUMENT_TOKEN_TO_BE_REPLACED

Time travel films and TV shows are popular and well known to audiences. However one will find a lack of films and shows about alternate history and universes. Based on this inequality viewers  would think that alternate history is some minor niche sub-genre in science fiction. 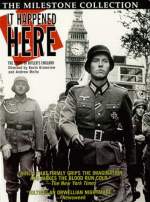 But sci-fi fans who actually read books and stories know that’s not the case. Just scroll through the Amazon or Barnes and Noble sites and one can find a multitude of books and story collections concerning alternate history. Many are very popular with readers such as the many multi-book series by Harry Turtledove (ex. the Worldwar books, the Great War trilogy, etc.), S.M. Stirling’s works and so on. Even comic books have notable alternate history works. These include Captain Confederacy, Storming Paradise, Marvel Comics’ What If? one shots, DC’s Elseworlds comic and most famously Alan Moore’s Watchmen. Then why so little films and TV shows?

The genre has been so poorly represented that one can easily count the amount of films and shows about this subject. Some of the best examples aren’t obvious alternate history but are well known. In fact, one film is considered one of the best films ever made. Which one? It’s A Wonderful Life. Many say it’s a fantasy but it’s also about alternate history. George Bailey wishes he was never born and is then shown a world where he never existed, one that is nightmarish.

Viewers only see the butterfly effect on George’s hometown Bedford Falls (renamed Pottersville) but one can’t assume there weren’t other butterfly effects. Notably when his guardian angel points out to George Bailey that he never saved his brother and thus George’s brother never saved his fellow soldiers in World War II. Who knows what effect that would’ve done to the timestream? Also evil Mr. Potter became more powerful and corrupt without George Bailey to keep him check. There’s no telling what kind of influence Potter would’ve had in the darker world shown in It’s A Wonderful Life.

Other examples of alternate universes usually show a world that has been altered by time travel (and perhaps giving the impression that the genre is tied to time travel, which it isn’t). A good example of that is Back To The Future, Part II where Biff Tannen steals the time-traveling DeLorean and

alters his past making him a rich and influential figure in history. Aside from the changes to his and Marty McFly’s hometown, viewers with good eyes will see that the world had been altered. Look at a newspaper that Doc Brown shows to Marty McFly. The altered timeline in Back To The Future, Part II takes place in 1985 and a feature article in that paper is one that shows that Richard Nixon is still president of the United States and that the country is still involved in the Vietnam War.

There have been other films that are more clearly about alternate history. Unfortunately many of them aren’t any good, and came and went in theaters without much notice. This could be why studios don’t greenlight more films in this genre. Such films include Jet Li’s action piece The One (which shows several alternate worlds including one with a President Gore), Southland Tales, C.S.A.: The Confederate States Of America, the 1995 version of Richard III (which takes place in a 1930s fascist Britain and stars Ian McKellan), Never Let Me Go, HBO’s

adaptation of Fatherland (with the oft-used premise of Nazis winning World War II), It Happened Here, and White Man’s Burden (which has a world where racial roles are reversed between whites and blacks). Add to that list Zack Snyder’s Watchmen adaptation where frankly the best part of the film was the opening credits which showed how history was altered when superheroes came into existence in the 1940s and 1960s. A more recent film that has to be labeled alternate history is Inglourious Basterds. It’s more of a World War II action picture but the ending, without giving away spoilers, demonstrates that the film is about alternate history. Another recent example is District 9 wherein an alien craft becomes stranded in South Africa in the 1980s although it takes place in modern times.

Regarding the TV medium, the best examples of alternate history are Fringe (which has a major storyline about crossing over into a world where the World Trade Center is still intact, technology is about ten years advanced of ours, and where Bono isn’t a famous singer), an awful ’80s show called Otherworld about a family trapped in a parallel world and Sliders, of course.

Despite its wildly varying quality, Sliders best exemplified the exploration of alternate worlds. Oftentimes, the creators went wild in presenting worlds that had living dinosaurs, an America ruled by Communists and other powers and different world threats. Sadly this also meant that Sliders had some truly dumb episodes that ripped off the plotlines of several sci-fi stories. Regardless, Sliders is probably the best TV example of alternate universes. Believe it or not The West Wing can also be considered to be about an alternate universe since it clearly shows that recent history has had a few fictional presidents (without a mention of the Bushes and Clinton) and events. Spike TV recently aired a half-hour program called Alternate History that examined what if the Nazis conquered America. It was blasted by fans of the genre for glossing over many repurcusions and it’s unknown at this time if more episodes will follow. Other genre shows like Star Trek and Doctor Who have had episodes dealing with alternate universes as well.

Some shows and films (and books too) are now considered alternate history because at the time they came out predictions were made that never came to be. They clearly point out that they took place in a certain time period and events happened that would radically change our history up to now. Look at Alien Nation (both the film and series). The storyline claims that the alien Newcomers came to Earth sometime in the late ’80s or early ’90s. Then there’s Strange Days (which takes place in late 1999 and has a world with advanced VR tech) and Red Dawn, where the U.S. is invaded by Soviet forces. One has to lump in 2001: A Space Odyssey and its sequel 2010 since we don’t have A.I.s or regular lunar transports (with Pan Am still in existence!) to bustling space stations. Some films will soon become alternate history presentations as dates stated in the films come to pass. That includes Blade Runner (L.A. has about eight years to keep from looking like that hellhole shown in that classic film) and Back To The Future, Part II. We’re about four years away from the film’s look at 2015 and there still aren’t any hoverboards, cool flying cars and self-lacing sneakers. There’s still time for the Cubs to win the World Series by then. 😀 With TV shows, the mini-series Amerika and The Day After have to be thrown into this lot (thankfully neither events depicted in them have come to pass).

Aside from poor reception by viewers one reason why there alternate history doesn’t have more of a presence in film and TV could be that they require extensive exposition to explain themselves. Look at Southland Tales; in that film several minutes in the beginning was used up to show that the U.S. diverged from our history when terrorists detonated two nukes in Texas. It was clumsily presented and frankly one didn’t care about how this impacted the dull characters.

Another reason for the lack of such films and shows is that alternate history can be complex, showcasing a broad range of characters affected by altered events. Aside from expensive production values, to really get audiences involved the productions  need to have well-developed characters like in many books. This logic of caring only about characters could be why some films are only about the altered lives of the characters such as It’s A Wonderful Life, Sliding Doors and The Family Man. It would help if people took more interest in history to better appreciate this genre. That is because alternate history offers us a way to reflect on how things might’ve been different and to enjoy what we have or strive for something that we don’t have yet.