Guardians of the Galaxy, Vol. 2 (GOTGV2) is exploding onto screens everywhere and kicks off the summer season with a big blast that goes for the heart. For those keeping count the sequel to the hit film Guardians of the Galaxy is the latest offering from Marvel Studios and its popular Marvel Cinematic Universe (MCU).

The film takes place shortly after the last film as the Guardians of the Galaxy are doing mercenary work for a galactic civilization called the Sovereign. The opening credits showcase the galactic misfits at their very best and reunite audiences with the loveable bunch. The team includes Earthling Peter Quill aka Star-Lord (Chris Pratt), former assassin Gamora (Zoe Saldana), the too-literal Drax (Dave Bautista), the cybernetically enhanced Rocket Raccoon (voiced by Bradley Cooper) and the tiny plant being Baby Groot (voiced by Vin Diesel). Right off the bat the adorable Baby Groot steals the spotlight with his oh-so-cute antics as the rest of the Guardians fight this gigantic monster squid thing. His scenes throughout the film will bring many “Awwws” and laughs and sure he is an obvious merchandising wonder, but Baby Groot is just so endearing that only truly embittered grouches will mind him. 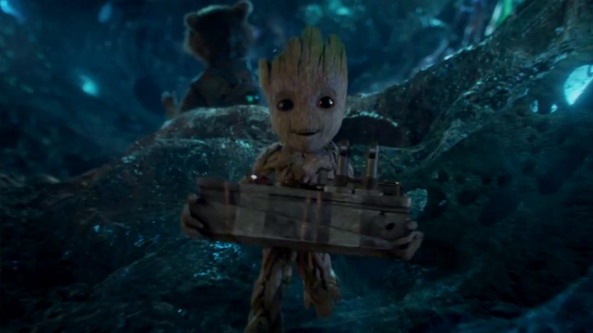 As with the previous film, GOTGV2 starts off with a toe-tapping soundtrack of oldies but goodies during the opening credits. The selection of songs is quite good, but unlike the original which featured some rousing classics, the songs for Guardians of the Galaxy, Vol. 2 are more reflective of the film’s themes.

This film is quite exciting and funny, in fact, many skits and jokes outperform the original. However, one drawback it has when compared to the original is that its main plot meanders at times. There is a story, and it deeply affects our heroes, but GOTGV2 focuses more on character. The plot isn’t as important to the film as is exploring the heart and soul of the Guardians. 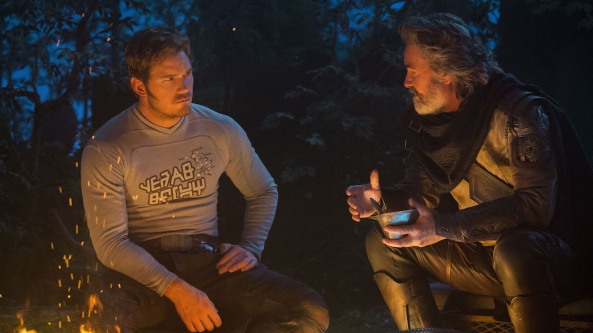 As our heroes evade the Sovereign they also have to deal with their old foes the space pirates called the Ravagers and Peter Quill meets his father, Ego (Kurt Russell). Encountering his father leads to Peter on a journey of self discovery as he learns about his true, half-alien heritage. Meanwhile, the other members of the team come to realize some truths about themselves and how they feel about others. During all this self-reflection the Guardians of the Galaxy stumble upon a terrible revelation that threatens the entire galaxy.

Whereas, the first Guardians of the Galaxy was a great big adventure that kept building up to a climax and had a clear villain, this sequel has a different approach. GOTGV2 starts off as another whacky day filled with thrills, jokes and putdowns, but the pace lets up in the middle. This sacrifice in momentum and pace was done to give the characters development that adds dimension to them. It may turn off some people expecting a retread of the first film, but others will appreciate the successful efforts to develop not just the main characters, but returning supporting characters.

The central theme Guardians of the Galaxy, Vol. 2 focuses heavily on is that of family and friendship. Peter Quill and the others are given time to reflect on family and what that concept means to them. Sometimes these ponderings and musings are too on the nose and are part of the reason the film’s pace slows, but in the end, they help us to care more about the characters. More importantly their growth as characters are more genuine and earned. On the whole, this different atmosphere gives the film a more mature tone with appropriate heart-tugging moments.

The one standout character who benefits from the film’s tone is the Ravager leader Yondu (well played by Michael Rooker). His character is unexpectedly more developed and he is allowed to show that underneath his tough exterior he has a heart that redeems him. The scenes with him and Rocket run the gamut from hysterically funny to poignant as their souls are laid bare to each other. They make a terrific team and are some of the film’s highlights.

Even the film’s villain is given screen time to show different characteristics. Unlike the first film’s one-dimensional Ronan, the villain of GOTGV2, who is eventually revealed later in the film, is a more interesting character which allows the final confrontation with the heroes to feel more personal. The gradual unveiling of the villain is another reason for the sequel’s slower tone, whereas with Ronan it was clear he was the main foe and this kept the Guardians constantly on the edge. Here, the characters contend with lesser villains like the Sovereign, who are as monotone as their gold skin tone and Yondu’s Ravagers. As to how GOTGV2’s main villain measures up is hard to say. The MCU has been criticized for featuring relatively weak villains, but the one featured in Guardians of the Galaxy, Vol. 2 is more notorious and stands out more.

All told, Guardians of the Galaxy, Vol. 2 is not an inferior sequel. It stands up quite well to the original and is solidly in the upper echelons of the MCU films. It has so much to offer and though it tries a bit too hard to be something different and more introspective it is more heartfelt than the original. The worlds explored, especially Ego’s planet are truly stupendous and otherworldly. Each scene fills the eyes with bizarre colors and images and most of the jokes and sight gags come at the right moment with near-perfect timing. The action scenes are wild and dizzying with terrific special effects and are strengthened by the presence of the beloved characters. Without all the character development the big action pieces, particularly in the final act would have had less impact, and we would have been less emotionally invested in these endearing characters. Each of the main team members are allotted amble screentime to display many nuances from Peter’s insecurity over his attraction to Gamora to Rocket’s caustic act being used as a way to hide his inner pain. There is much more than can be listed here. This is why in the end, James Gunn is validated for spending more screen time on these quieter and pensive moments.

Even though, the film isn’t well connected to the Earth-based MCU, it is bursting with many Marvel Easter eggs and shows many potential stories that can be developed later. It will take more viewings to spot all of them. By the way, be sure to stick around during the credits; there are five post-credit scenes, a couple of which portend to some intriguing new directions for the expanding Marvel Cinematic Universe. The best throwaway gag involves Marvel Comics legend Stan Lee and his connection to the Marvel Universe.

The best way to think of Guardians of the Galaxy, Vol. 2 is to compare it to…yes, The Empire Strikes Back or Back to the Future, Part II. Both sequels were enjoyable but more serious in tone as is GOTGV2. In time, many have come to embrace both sequels with many feeling that Empire was superior to the first Star Wars. This could happen with Guardians of the Galaxy, Vol. 2, but that assessment will come in time and after many deserved repeat viewings of this wonderful and emotional film.