It’s that time of year lovers! In commemoration of Valentine’s Day, here are the silver screen’s most romantic couples in the world of science fiction. The films they appear in aren’t always romances, actually, one of the entries on this list comes from a gritty, action-packed movie. The fact is there aren’t many sci-fi romantic films, so the focus is on the characters in a sci-fi film. Either way, these characters made for memorable couples and romances.

10. Sarah Connor and Kyle Reese (The Terminator): OK this is a bit of a stretch. Romance in The Terminator? The one with all the explosions and darkness? Yes, it isn’t apparent when Kyle Reese (Michael Biehn) first saves Sarah Connor (Linda Hamilton) from the T-800, but as the movie progresses, the two begin to bond, culminating in a tender and passionate love moment.  Their brief encounter comes as a welcome relief in the midst of all the gore and gunfire and leads to humanity’s savior, their son John Connor. 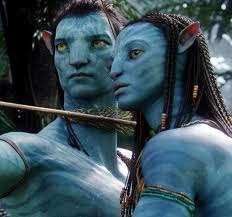 This film presents every sci-fi geek’s wish of having a big blue alien as a girlfriend. The love between Jake (Sam Worthington) and Neytiri (Zoe Saldana) builds gradually. Initially she’s disgusted by him but then starts to admiring him until love took hold.  And towards the end, viewers see that her love for him is transcendent even after she sees Jake in his frail human form.

8. Superman and Lois Lane (Superman and Superman II): From the moment that Superman (Christopher Reeve) saved intrepid reporter Lois Lane (Margot Kidder) from the helicopter accident and made his world debut, she only had eyes for the big boy scout. The sweeping romance continued in the sequel but ended in one big copout.

7. WALL-E and EVE (WALL-E): This is one unconventional romance, it’s between two robots but that’s science fiction. Ultimately the two exemplify the notion of opposites attract. WALL-E is a curious, Chaplinesque garbage robot, EVE is a suave, tough, and pristine scout robot. Naturally, he falls head over tank treads for EVE but she only comes to love him during the film as they save humanity.

6. Henry  and Claire DeTamble (The Time Traveler’s Wife): Relationships are hard, but how much harder is it when your husband has a genetic abnormality that makes him time travel uncontrollably throughout his lifetime? That’s what viewers see when Henry (Eric Bana) literally pops in and out of the life of Claire (Rachel McAdams), even on their wedding day! Warning: the ending is a tearjerker. 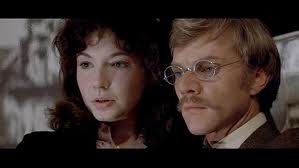 (Malcolm McDowell) time traveling to San Francisco in 1979 to track down Jack the Ripper. Along the way, the sweetly naive Welles meets strong-willed, modern  bank teller Amy (Mary Steenburgen) and they soon have an affair. The chemistry the actors shared was obvious (they even got married in real life for a time) and made the film more special.

4. Cornelius and Zira (Planet Of The Apes and Escape From The Planet Of The Apes): Their relationship wasn’t the center of attention in the first film but forms a strong foundation in the third film. Across the first three Apes films viewers see a tender, loving simian couple who strongly respect and cherish one another. Sadly, this makes the end of the third film so heartbreaking when they are brutally killed. It’s still hard to watch Zira’s (Kim Hunter) final moments when she embraces Cornelius’ (Roddy McDowall) body as she dies.

3. Doc Brown and Clara Clayton (Back To The Future, Part III): Marty McFly’s time-traveling partner (Christopher Lloyd) is trapped in the 1880s but finds existence there to be rewarding thanks to a chance encounter with schoolteacher Clara (Mary Steenburgen again). She gets extra bonus points from us since she’s a big science fiction fan! The tortured choices that Doc faces on whether or not to return to the present or stay with his true love really do a number on him. But alas, love conquers all.

2. Han Solo and Princess Leia Organa (Star Wars Episode V: The Empire Strikes Back): Who would’ve thought of it? A scruffy, unpolished smuggler and a headstrong, independent space princess falling for each other. Han (Harrison Ford) and Leia’s (Carrie Fisher) relationship lift the first Star Wars sequel with their romantic tension and squabbling that reaches a climax when they first kiss passionately while fixing the Millennium Falcon. Plus, as every fan knows the film has one of the greatest comeback line to “I love you.”

1. Starman/”Scott Hayden” and Jenny Hayden (Starman): Poor Jenny (Karen Allen) is still mourning the death of her husband when she gets the shock of her life when he is reborn in front of her. Actually the resurrected Scott is a stranded alien (Jeff Bridges) who takes her husband’s form and enlists her help to get back to a rescue spaceship. Like any romantic road trip picture, the two don’t quite connect at first but begin to like then love each other. What helps the romance are the passionate performances by both actors, John Carpenter’s direction and the haunting yet uplifting score by Jack Nitzsche.

Finally, let’s give a shout out to those without a beloved on Valentine’s Day and mention the big screen’s best would-be lovers. In an ode to unrequited love in the realm of science fiction that honor goes to Mal Reynolds (Nathan Fillion) and Inara Serra (Morena Baccarin) from Serenity.