Known to many as Spider-Man’s co-creator, Steve Ditko was also part of the first decade of the creation of Marvel Comics. His main character contributions and sequential issue work are Spider-Man and Dr. Strange, but during Marvel’s initial years, he also drew plenty of issues featuring Hulk, Ant-Man and the Wasp, Iron Man, along with issues of The Avengers, and all sorts of double feature issues.

Comic book creations and pop culture relevance is by now well ingrained in the minds of moviegoers and audiences worldwide. people now understand that many superheroes began as characters seen in published comic books. Newsprint paper, four-color separation and halftone color patterns were props behind the stage. Distributors and retail stores were their curtains and the hands and eyes of those who bought these issues were the audiences. Comic book fame spun off into animated and live-action TV shows, video games, movies and merchandise. The most profitable characters were the superheroes.

There has been much discussion in the past as to what degree of involvement Stan Lee, Jack Kirby and Steve Ditko had in creating Spider-Man. How much of Spidey was adapted from Jack Kirby’s initial design? How much of Spidey was in Lee’s brief written synopsis? What was Ditko’s actual contribution in regard to the amount of content – character designs, costumes designs, characterizations, signature moves, etc. ? It’s a discussion that may never be resolved.

For a character who is arguably the world’s favorite Marvel Comic character, his origin is still unclear even though he was introduced in Amazing Fantasy #15. Back in 1961, Marvel Comics Publishing Group was such a loose and flowing House of Ideas, that any iteration which lead to the creation of the Spider-Man look we all know and was only loosely documented. Some of it was Kirby. Most of it was Ditko and approved by Lee. But there’s no doubt, the look that Ditko presented is a handmade costume, big eyes, a webbing motif on the red portions of the costume, and mechanical web shooters. Ditko had a penchant for quirky action poses and Spider-Man’s signature poses no doubt came from Ditko. None of Kirby’s characters moved like that. All of Ditko’s characters moved kind of quirky and not quite natural. His landscapes ranged from urbanely gritty to fantastical. The distinctive realms he drew for the Dr. Strange stories have been compared to Salvador Dali paintings. The characters’ look for both hero and villain were all Ditko. Even the “surfer dude hand sign” which is used by both Spidey and Dr. Strange is a signature Ditko design. 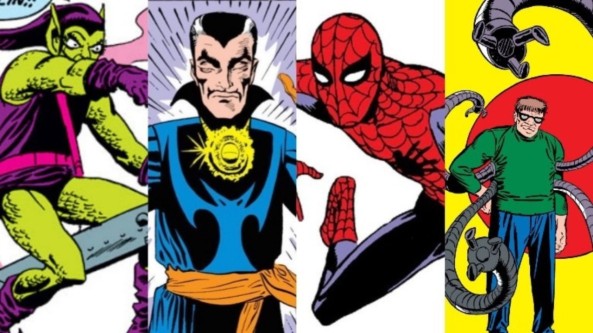 END_OF_DOCUMENT_TOKEN_TO_BE_REPLACED

Amidst all the celebration of Marvel Comics’ 75th anniversary is the notion that famed writer Stan lee singlehandedly created the entire lineup of the Marvel Universe. That couldn’t be farther from the truth.

His biggest collaborator in the early days was Marvel Comic’s co-creator Jack Kirby. Kirby was not only the dynamic, genius penciler with fantastic layouts and renditions, he was more than a co-plotter on stories “written” by Stan Lee. 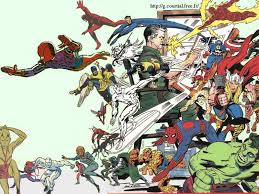 sentence plot. It was up to Jack to find the action, the comedy, the tragedy, the pacing and the tone as he was also creating the art. So, by saying that Jack was a co-plotter is not giving Jack enough credit. Together Stan and Jack created the X-Men, the Avengers, the Fantastic Four and all the supporting characters and villains that appeared in those books during Marvel’s origin years- the early 1960s. Stan also had other collaborators too, such as Steve Ditko, co-creator of Spider-Man and Dr. Strange, and he had a similar working relationship with Ditko.

As the Marvel universe began to take shape during the ’60s, which was known as the Silver Age of comic books, other artistic collaborators followed– Gene Colan, John Buscema, Bill Everett, Wally Wood, Jim Steranko, all embellished upon the house of characters that Jack, Stan, and Steve built. So for accuracy’s sake remember as we celebrate Marvel Comics’ 75th anniversary, although he was a critical part in the formation of the Marvel Universe, Stan Lee did not create the Marvel Universe all by himself.