The many post-apocalyptic horror films are intriguing and terrifying by giving viewers a dreadful glimpse of our potential future. In other words, they’re a fine blend of sci-fi and horror, as well as fantasy and even comedy. Here now are the ten best films in this sub-genre. 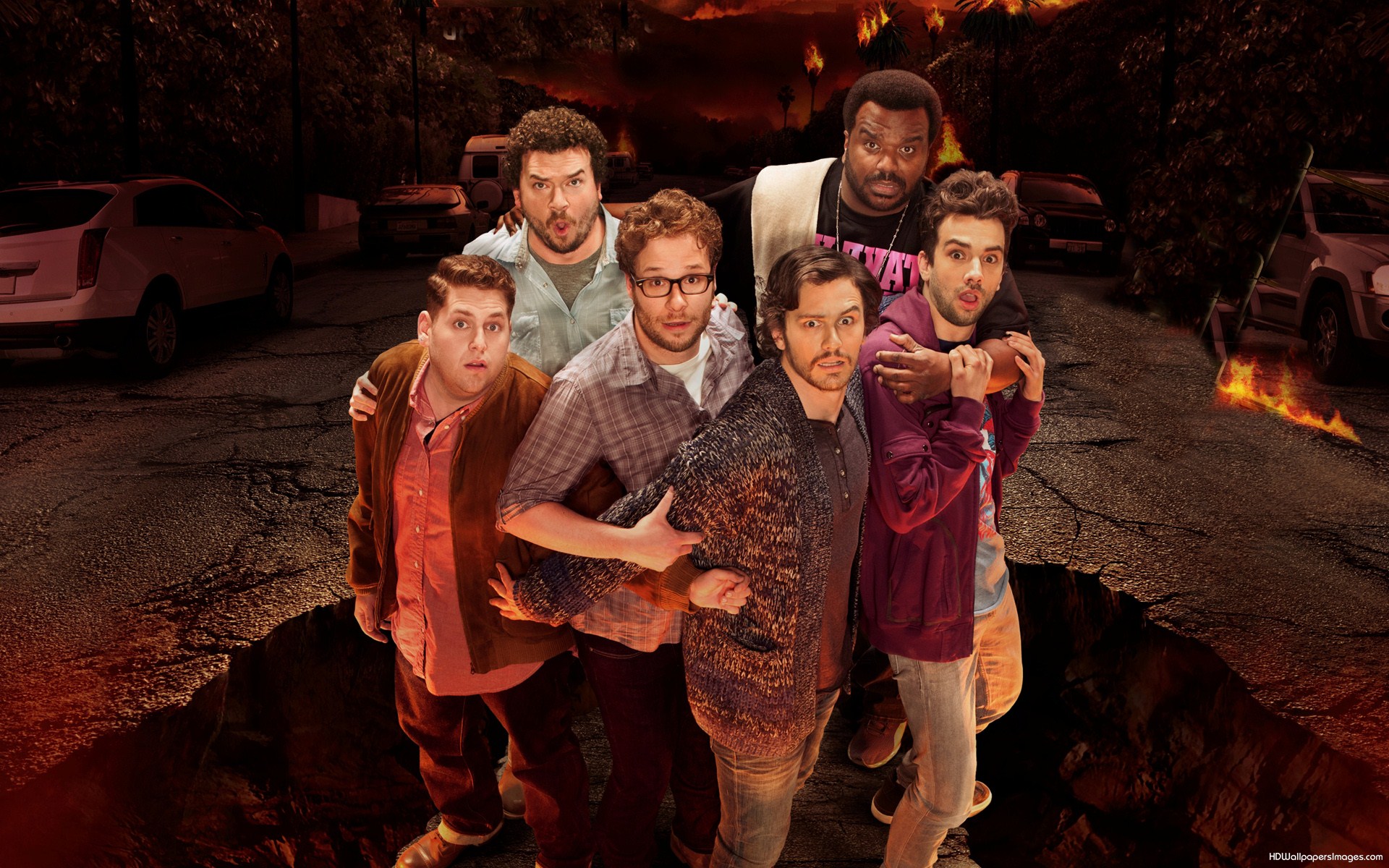 Seth Rogan, Jay Baruchel, James Franco and Danny McBride play fictional versions of themselves as the world experiences the Rapture then the literal end of the world as demons ravage the planet. The film is actually quite funny and raunchy as the hapless actors do their best to survive the Apocalypse while trying to be worthy enough for salvation.

The how-to guide to surviving the zombie apocalypse is a quirky laugh fest that pokes fun at many zombie and survival tropes. The film is elevated by inspired performances by Jesse Eisenberg and Woody Harrelson, plus a hysterical appearance by Bill Murray as himself. Warning: despite what Zombieland claims, twinkies do not have that long of a shelf life, which should have disappointed Harrelson’s Tallahassee.

Taking place years after vampires have devastated civilization, this quiet and poignant road movie is very moving as it focuses on the journey of a sensitive young man (Connor Paolo) and his mentor, the tough-as-nails vampire killer known only as Mister (Nick Damici). Their ongoing struggle against the vampire hordes and the people they meet in their journey highlight this film.

A pre-Star Trek Chris Pine leads the cast in this horror survival film about four young people living desperate lives after a virus wipes out most of humanity. Carriers is a brutal and unflinching character study that exposes the worst instincts of humanity and is frightening portent of what might happen to us in a hopeless situation where a disease causes our society to completely collapse.

The third adaptation of Richard Matheson’s classic novel is a flawed yet exciting examination of a lone human (Will Smith) and his dog after a virus turns most of humanity into savage mutant creatures. Smith’s performance and the production design are some of the best aspects of this version of I Am Legend; the landscape of New York City after nature reclaimed it are just stunning to watch. Although many have decried the film’s ending because it deviated so wildly from Matheson’s message, there is an alternate ending that is more faithful to the spirt of the novel.

This bleak and harsh adaptation of Stephen King’s novella puts viewers through an emotional wringer. Thomas Jane stars as an artist who is trapped with his young son and several shoppers in a supermarket after a mysterious mist engulfs their town and brings deadly and bloodthirsty creatures. Even deadlier than the monstrosities in The Mist are the trapped people themselves as they allow fear to overwhelm their sense of decency and common sense. The ending of The Mist differs greatly from King’s story but in this case actually outdid what Stephen King wrote and is a genuine and agonizing gut punch.

John Krasinski and his wife Emily Blunt star in this post-apocalyptic horror film where civilization has been destroyed by nearly invulnerable alien predators that hunt by sound. Forced to live a life of near silence with their children, the couple do their best to survive their new normal and stay ahead of the alien creatures.  A Quiet Place is a film that oozes with tension and fear as we see this fragile and resilient family doing their best not to make sounds even in their own homes. Additionally, the film is beautifully directed by Krasinski who wisely keeps the focus of the story on the characters themselves, which pays off since viewers are engaged with the characters’ plight. 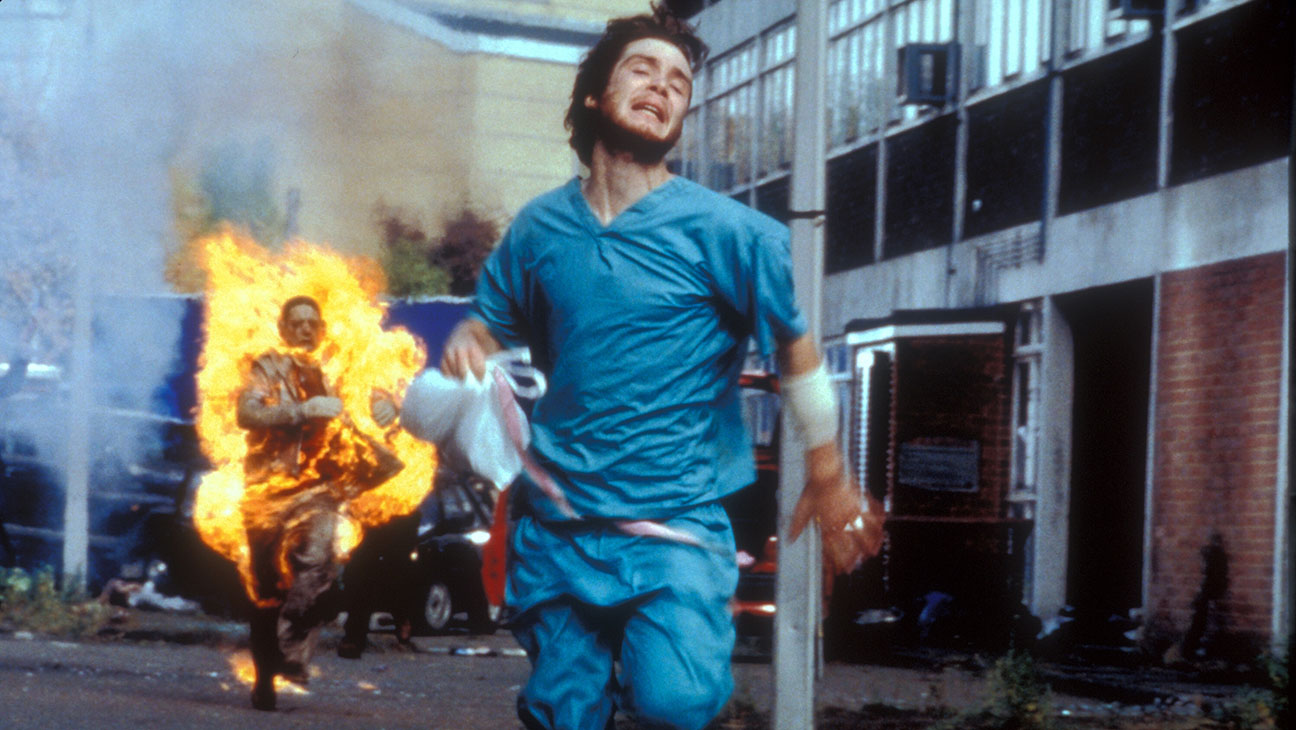 Director Danny Boyle reinvigorated the zombie genre with an ingenious twist. The zombies, actually infected and mindless humans, run! After a pre-credits sequence shows how an engineered virus is released from a lab, 28 Days Later jumps ahead and takes viewers through the journey of Jim (Cillian Murphy) a messenger who wakes up from a coma and finds himself in a mysteriously abandoned London. Before long he discovers that the city has been overrun by the savage infected who spread the deadly virus through a bite or a single drop of blood. During his voyage to find sanctuary with a group of survivors, Jim struggles to adapt to his new normal while holding onto his sense of humanity. The sequel 28 Weeks Later is not as good as the original film but further examines this frightening world.

The most terrifying look at nuclear war since the American television film, The Day After. Threads takes thing much further than The Day After with a gritty, documentary tone. Taking place in London during the 1980s, the film bombards us with horrifying imagery and events which illustrate how fragile society is following a devastating nuclear war that levels the city and all of civilization. Threads leaves a disturbing impression on viewers with its depiction of a brutal and barbaric life after a nuclear holocaust. Before long, viewers will realize the luckiest persons in the film were those that perished in the opening salvo of World War III as the survivors are faced with a crumbling societal infrastructure where chaos overtakes law and order and humanity.

Possibly the greatest zombie film ever made. George Romero’s sequel to his classic Night of the Living Dead takes place some time after the original. The zombies are gradually disrupting society as they feast on humans. Before long civilization collapses and the film follows the plight of a group of survivors who take refuge in an abandoned mall and keep the undead outside at bay. Dawn of the Dead is partly a thrilling survival film and partly a humorous commentary on society through the scenes of zombies clumsily acting out their past living lives in the mall). The film was a revolutionary and controversial post-apocalpytic horror film thanks to its uncensored and unflinching violence. Nevertheless, the film is a horror classic and the best post-apocalyptic horror film of all time.