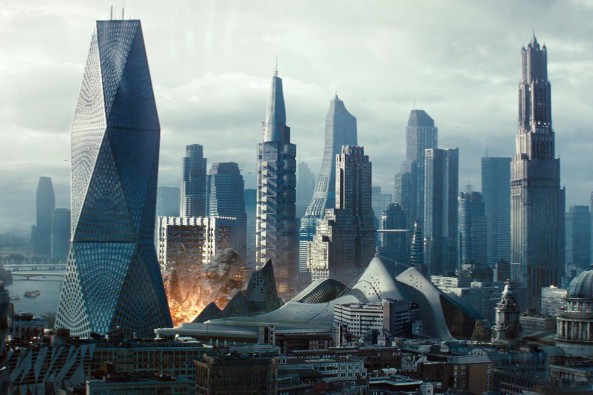 One of the niftiest things about sci-fi films are the eye-popping portraits of the future. Most recently, audiences were floored by the breathtaking futuristic cityscapes seen in Star Trek Into Darkness. Keep in mind, that for dramatic reasons, things may not be perfect in these futuristic utopias. In fact, sometimes with these paradises there are significant drawbacks about them and the cost of paradise is often steep. Still, from flying cars to robotic servants, these films best showed how humanity can create a future to strive for.

10. Buck Rogers In The 25th Century: A utopian vision inspired by late ’70s deco! The pilot for the TV show was shown in theaters before the proper series started. Tackiness takes on a new meaning in this future society with wise-cracking robots, skin-tight outfits and cheesy sets. But thanks to unfrozen astronaut Buck Rogers (Gil Gerard), things like disco, basic military tactics and boogying down make a comeback!

9. Gattaca: Imagine a future with

modern architecture from the 1950s, turbine cars and where you get all the social and employment opportunities just for being you. Yes, you can live out your dreams…as long as you’re genetically pure. It’s a haven for the one-percenters. For the rest of us created the old fashioned way, well, we’re shit out of luck. But that doesn’t stop Vincent Freeman (Ethan Hawke) from achieving his dreams in this tech noir thriller by passing himself off as one of the genetically pure.

8. TIE: I, Robot/Bicentennial Man: Both films dealt with the nature of evolving androids in the future. They featured sprawling and impressive skylines, servant androids, and nifty, futuristic vehicles. In lots of ways, life is the same as it is today in the films except with the technological advances. Life isn’t perfect and androids and robots must grapple with their civil rights. This is dramatically shown in I, Robot where the robots attempt a takeover. But overall, the futures in those films seem enjoyable.

7. Logan’s Run: More cheesy, ’70s-based, sci-fi trappings! Humanity’s remnants live in an underground city connected by a rail system, making it all look like something from Disney World’s Tomorrowland. In Logan’s (Michael York) futuristic society, life is pleasant and hedonistic with casual sex and drug use. No one has any cares except for their looks. The only drawback is that once you reach your thirtieth birthday, you’re euthanized.

6. Demolition Man: Welcome to San Angeles, a city rebuilt from

the ashes of Los Angeles, San Diego and Santa Barbara. Along with clean streets and civil order, Taco Bell is the winner of the Franchise Wars and courteous behavior is strictly enforced. Also, crime is so rare that when a master criminal from our present (Wesley Snipes) is thawed out he creates chaos since cops in the future can’t cope. Enter John Spartan (Sylvester Stallone), a roguish policeman from the same time period, who is also unfrozen in order to stop him.

5. Meet The Robinsons: Young inventor Lewis time travels to the year 2037, which is a time period heavily influenced by Tomorrowland. There, he meets the wacky titular family and contends with a mysterious villain from his past. Lewis also experiences a colorful world filled with curvy skyscrapers, genetically enhanced frogs, flying bubble cars, robots and even cloned dinosaurs. It’s a bit like The Jetsons, but much cooler looking.

4. 2001: A Space Odyssey: Unfortunately, most of the nifty innovations and tech showcased in that monumental

film weren’t available by the time the actual year of 2001 came along. That year would’ve been better if we had some of the inspiring developments depicted in Kubrick’s masterpiece like space planes, commonplace space travel, a moon base, and super-advanced AIs. On second thought, we’re probably better off without the super smart and neurotic AIs like HAL 9000.

3. Minority Report: Director Steven Spielberg worked with futurists to create a believable and probable future stocked with stupendous technologies and inventions. Sure we have no privacy and eroded civil rights in Washington, D.C., circa 2052 thanks to the PreCrimes police force led by Jon Anderson (Tom Cruise). But take a gander at Minority Report’s amazing depictions of the future. Personalized holograms for customers in stores, electronic papers, glass-based computers, jetpacks, and robotically controlled cars that can scale walls. It all makes that future seem bearable to live in.

2. Back To The Future, Part II: What’s not to love about the optimistic future seen in this follow up to the first Back To The Future? Start with the cool-looking flying cars that clog skyways. You can convert your old cars to fly for just $39,999.95; it’s a steal! Next move on to dehydrators, holofilms, dust repellant paper, and hoverboards by Mattel (just avoid using them over water. All these innovations were part of a whimsical look at Hill Valley, CA, circa 2015. Even the clothing is uber cool–power Nikes with auto laces and jackets that adjust to your size! Worried about crime? No need to, with lawyers being abolished, justice is swift and efficient. Just watch out for those tranks, lobos and zipheads!

incredible social and technological advances. Gone are war, disease and poverty. Innovations like faster-than-light space travel, transporters, replicators and holodecks enrich humanity. The Star Trek films also displayed an Earth in the 23rd and 24th centuries that look clean and pristine. Take a look at the dazzling cityscapes of London and San Francisco in the latest Star Trek film. They set the bar for breathtaking and enviable views of the future. Of course, humans have to deal with Klingons, Borg and other alien bad guys. But with the likes of James T. Kirk (William Shatner, Chris Pine) and Jean-Luc Picard (Patrick Stewart), humanity can breathe easier. 😀