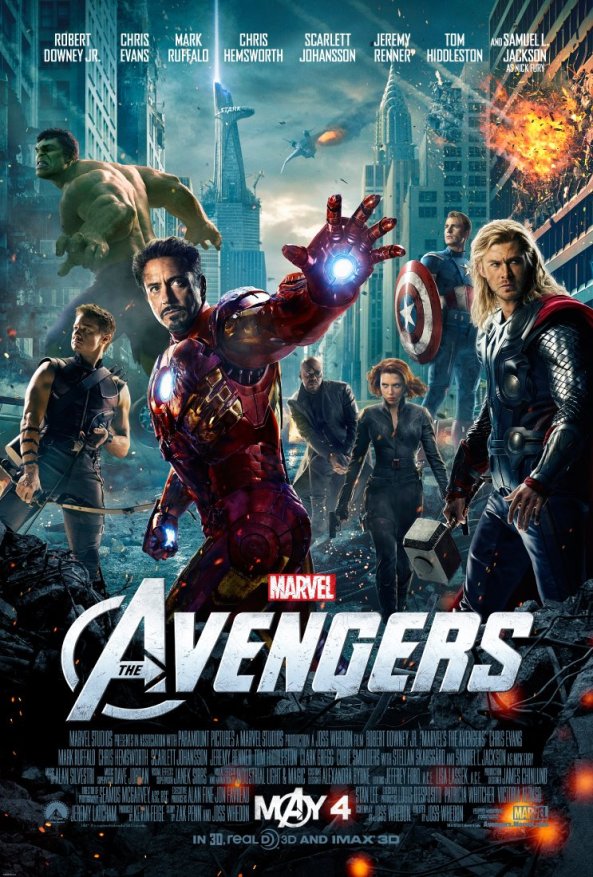 Wow. The new movie The Avengers literally left me breathless and spent after seeing it. Marvel Studios needs to take a well-deserved bow for their efforts throughout the years that culminated in this film. Many had doubts regarding the ability to pull this endeavor off but they are quickly dispelled with The Avengers. It so profusely feels like the climax that had been building up for many years.

Marvel Studios clearly made the right choice with Joss Whedon as the film’s director. He has the filmmaking talent and perhaps, more importantly, possesses a clear love and respect for the Marvel universe and it shows onscreen. But this film isn’t some slavish fanboy production. No, Joss Whedon and the crew had an understanding of how the Marvel universe works, how the Marvel characters behave and how to translate that to the screen and entertain even non-Marvel fans. It is difficult to imagine anyone else achieving what Whedon did and The Avengers will make him a deservedly A-list director. (On a side note, hopefully he will have the clout now to do a Firefly revival. Hey, we can only hope!) 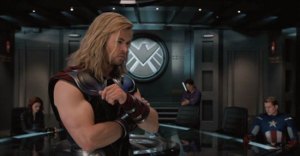 The Avengers jumps right into the action when demigod Thor’s (Chris Hemsworth) nemesis and brother Loki (Tom Hiddleston) arrives at an underground S.H.I.E.L.D. bunker and makes off with an otherworldly and powerful MacGuffin called the Tesseract (that’s the Cosmic Cube seen in many Marvel comics that grants unlimited power to wielders). After Loki escapes from the bunker, S.H.I.E.L.D. director Nick Fury (played by Samuel L. Jackson doing his usual tough-as-nails shtick) assembles a team of super heroes to help him retrieve the Tesseract and stop Loki’s plan to conquer the Earth. 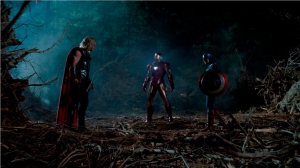 Then the fun begins as beloved characters like Tony Stark/Iron Man (Robert Downey, Jr.), Steve Rogers/Captain America (Chris Evans), Thor, Dr. Bruce Banner/Hulk (Mark Ruffalo, replacing Edward Norton and Eric Bana), Natasha Romanoff/Black Widow (Scarlett Johansson) and Clint Barton/Hawkeye (Jeremy Renner) meet for the first time. In the typical Marvel comics manner, they don’t get along with each other and even come to blows. But they learn to get along and even respect one another just in time to confront Loki and his alien army. 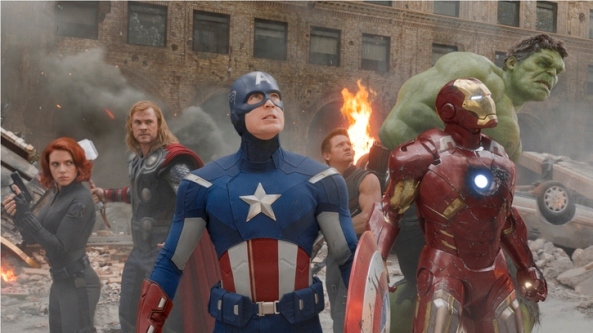 The Avengers is an action-packed bonanza with fantastic characters and that’s before the climatic final third of the film. Taking place in New York City, the beachhead for Loki’s alien invasion, the explosive, multi-tiered battles on the streets and in the skies are simply spectacular. There have been some complaints over how low-budget some previous Marvel Studios productions have been, but here no expense was spared. But unlike some empty, big-budget films, the action was very fluid and easy to follow, but more importantly the audience cared deeply about the heroes as they fought the alien army. Each character, even some minor ones, had their moment to shine. The Avengers could’ve easily been dominated by one or two characters like Iron Man due to the actor’s charisma but Joss Whedon knows how to give the actors just enough time to make their contributions before moving on the next character or plot point.

This film has set new standards for super hero films. One can only wonder how the filmmakers will top themselves (a clear, audience-rousing hint is given during the end credits; Marvel fans will rejoice) or how other studios’ films can compare to this one. Marvel Studios would be wise to retain Whedon for the inevitable sequel or at least use him for other productions. BTW, stick around for the very end, there’s another post-credit sequence. Without giving anything away, it isn’t anything earth-shattering, but rather a cinematic equivalent of having a cigarette or a relaxing drink after being so pumped out by the movie.