The Alien movies are some of the most well-loved films in science fiction and with the upcoming prequel Prometheus about to be released in the U.S., here are the films that preceded it in order of my personal preference:

1. Alien (1979) Ridley Scott’s sci-fi/horror masterpiece set the standard for this genre. Over the years I have come to regard this one as the best of the

bunch because of how well it works. These are the elements that work: the claustrophobic feel of the freighter ship, the slow, but scary, build up to the mystery of what is on the planet that the crew land on and what exactly is picking them off. The infamous chestburster scene is still effective to this very day. The director’s cut on DVD and blu-ray is also very good and even shows a scene where Ripley (Sigourney Weaver) finds Captain Dallas in a cocoon after being attacked by the alien and burns him alive to put him out of his misery.

2. Aliens (1986) James Cameron created a sci-fi war epic that is one of the best films ever made. It created the image of the space marine that is so prevalent in films and video games today 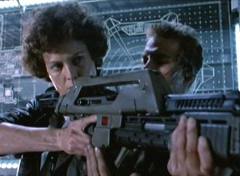 and is a great thrill ride from start to finish. The main character Ripley was joined by Newt (Carrie Henn), Hicks (Michael Biehn), Hudson (Bill Paxton) and others that  audiences grew to love. The extended edition shows the back story of the colony Hadley’s Hope and how the aliens took it over. On a side note there will be a video game next year entitled Aliens: Colonial Marines for the PS3 and Xbox 360 that will continue the story.

3. Alien 3 (1993) An underrated David Fincher film that is striking in its visuals and feel. Lone survivor Ripley crash lands on a  prison planet and is followed by a single alien that proceeds to wipe out the prison population harkening back to the original film.  I think this movie is excellent and unfairly hated because fan favorites Newt and Hicks were killed off. Many wanted a follow up to Aliens and instead got a dark almost existential film about Ripley at the end of her rope.

This film had a video game adaptation for the Super NES in 1993 that actually played like a side scroller action game with lots of guns and aliens to fight. Quite different from the actual movie. There is also an alternate cut of the movie available on blu-ray and DVD. It restores a subplot of one of the prisoners worshipping the alien and releasing it when it was trapped by Ripley and shows the alien bursting out of an ox instead of a dog as in the theatrical version. Definitely something for fans to check out.

4. Alien Vs. Predator (2004) I’m putting this one ahead of the 4th film Alien: Resurrection since it is simply a better

movie. Why it is hated so much is strange. A very good film that shows predators coming to Earth to hunt aliens in the south pole that they placed there as a rite of passage for their young. The set up with the archaeologists finding the eggs and alien queen in the underground temple is great and the battles between the two franchise monsters is lots of fun.

5. Alien: Resurrection (1997) The last Alien film with Ripley. It is set 200 years after her death and has her cloned to extract an alien queen from her body. It has interesting concepts with Ripley actually having alien DNA and blood in her system. The scene where she finds the previous versions of herself is both fascinating and disturbing. The movie returns to the idea of multiple aliens chasing down a rag tag group of mercenaries trying to escape a doomed ship. Seeing Ripley finally returning to Earth is also a nice way to finish her story.

6. Alien Vs. Predator: Requiem (2007) This entry is the only real misfire of the bunch. A follow up to the much better Alien Vs. Predator, the idea of a predator/alien hybrid sounds okay but looks kind of dumb when seen on film. The characters are very forgettable and the whole thing feels more like a bad Syfy movie of the week. Although it is neat to see the aliens crawling around a present-day town in Colorado, since most of the other movies are set in space and the future. I get the feeling that under another director this would have been so much better since the core story of a single predator hunting down aliens on earth is good and there are some good battles between the creatures.