One of the biggest gripes from detractors of the film The Amazing Spider-Man is that it has a dark tone. They blame it on the film studio, which wanted to emulate the mood of the recent, blockbuster Batman films. These critics complain that the character isn’t dark and this new interpretation of Spider-Man doesn’t work for that reason.

However, if anyone looks at the entirety of Spider-Man’s comic books, it can be seen that the character has had dark moments. He isn’t always this light-hearted, happy-go-lucky wise guy that breezes through life. A closer look will show that often his world is bittersweet. Just as often as he loses while he wins. Spider-Man may win a climactic battle against the Green Goblin, but his alter ego Peter Parker faces eviction because he doesn’t have the money to pay rent.

Or the web swinger faces public hostility and derision from the police who consider him an outlaw. Usually, stories in the comic books portrayed him as being persecuted by trigger-happy policemen.

Then there are the tragic periods in Parker’s life.

To start, in his debut story (Amazing Fantasy#15), his uncle is killed by a burglar and Parker learns at the end of the tale that he is responsible for his uncle’s death because earlier in the story, he

selfishly refused to stop the burglar during an unrelated robbery. It may not compare with the agony of the Punisher’s family being gunned down by mobsters but it’s not anything lightweight. Actually most superheroes have some kind of tragic catalyst that turned them heroic.

Throughout his history, Parker has endured many hardships since he’s become Spider-Man. Probably the worst, after his uncle’s death, is the killing of his girlfriend Gwen Stacy at the hands of the Green Goblin in The Amazing Spider-Man #121. This affected him deeply for several years and is a monumental event in comics because it was one of the first times that a main character’s loved one was killed and marked the end of the silver age of comics.

Going Too Far To The Dark Side

Spider-Man has gone through several grim, brooding periods. Some were rather forced and done to sell issues. This happened in the early ’90s after his supposedly deceased parents showed up alive and well from issues #366-389 in the first volume of The Amazing Spider-Man. At the end of that storyline, they were revealed to be robotic doubles sent by his deceased friend Harry Osborn (a.k.a. the second Green Goblin) to basically screw with Parker’s head. For several issues afterward, the web swinger lost it, he gave up on his Parker identity and ran around town emulating a dark hero like Batman. These issues were poorly written because they went overboard with his psychotic reaction. Unfortunately, this events led to the infamous Clone Saga.

There was also the infamous undoing of his marriage that was done using  a convoluted meeting with the demonic entity Mephisto in the storyline “One More Day”. Going completely against character, the creators had Parker make a deal with the devil to save his aunt with his marriage to Mary Jane being wiped from history as a price. This incident probably damaged Parker more than any other because it showed that by agreeing to deal with the devil he lost part of his soul. He seemed much less heroic. It didn’t have to be that way, the editorial board could have just had him get divorced and move on with his life, but they tampered too much with Parker’s integrity. 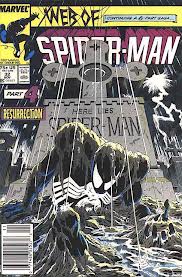 But the character has faced dark events that were successfully told. Take the classic storyline “Kraven’s Last Hunt”,  written by J. M. DeMatteis, where his foe Kraven the Hunter defeats him, puts him in a death-like state and even buries him alive. Later Kraven assumes Spider-Man’s identity and becomes a twisted, violent version of the hero. Parker has to literally claw his way out of the grave and face his inner demons afterwards.

Then there was issue #36 of the second volume of The Amazing Spider-Man. Known as the  “Black Issue” it’s the one where Spider-Man dealt with the 9/11tragedy. There wasn’t anything cheery or fluffy about this story or the character. In fact, it showed how helpless and angry the superhero felt and it worked because since Spider-Man is more of an everyman character, it was easy to identify with him. We all felt like he did during that terrible day.

The web slinger’s bleakest moment was obviously when he died in Ultimate Spider-Man # 160. In the “Death Of Spider-Man” story arc, the Ultimate Universe version of Spider-Man fought desperately against his greatest foes and met his end after defeating the Green Goblin. It was one of the character’s most unforgettable stories. Thankfully, readers still have Peter Parker to root for in the regular continuity. 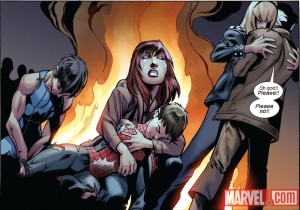 The general public has this misconception that Spider-Man is some kind of goody two shoes and that is largely due to how he is portrayed outside of comics. It probably all started during his first cartoon series in the ’60s and when he appeared in silly live-action segments of the kids’ program The Electric Company. Then whenever he appeared in other animated shows, the more grimmer stories couldn’t be used. This however led to lightweight shows like Spider-Man And His Amazing Friends.

lightweight perception. In the first two films, the character swings around New York yelling out “Wahoo!” with swooning fans cheering at him (a rare occurrence in comic books) and leaves behind perfectly typewritten notes saying “Courtesy of your friendly neighborhood Spider-Man”. The movies were enjoyable but felt cheesy at times. Things took a turn for the worst with Spider-Man 3 where the attempts to have the character go dark were as

laughable as anything seen in the Joel Schumacher Batman films. This isn’t a slight against Raimi, his first two Spider-Man films are fun to watch. If anyone is to blame for this perception it could be the marketing people who want to make sure the character is kid friendly in order to sell more merchandise.

Regardless of marketing efforts, it was refreshing to see the character in a more realistic light during the recent movie which balances thing out. After all, like it or not, sometimes life is dark, even for Spider-Man.