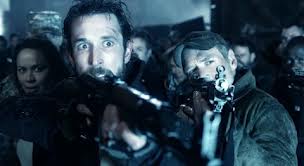 The science fiction war drama TV show Falling Skies just concluded its second season on TNT with the episode “A More Perfect Union”, and proved that it never rests on its laurels.

Falling Skies stars Noah Wyle as Tom Mason, an ex-history professor and now second in command of a rag-tag militia called the 2nd Mass. Originally based in the Boston area (and for the entirety of its first season), the unit abandoned New England early in the second season to head for the supposed safe haven of Charleston, South Carolina.

As with most filmed road trips stuff happened, usually to progress a storyline or develop characters. For instance, Tom started a tender relationship with the group’s field medic Dr. Anne Glass (Moon Bloodgood), dealt with recriminations from being abducted then released by the alien invaders (from the end of the first season) and had to accept that his children

had grown up. The oldest Hal (Drew Roy) became a competent, deadly soldier and a future leader; the youngest Matt (Maxim Knight) grew up too fast and is now doing sentry duty; but the most interesting son is his middle one, Ben. He had been abducted (along with many of Earth’s children) by the aliens before the show started and fitted with a biomechanical device on his spine that enslaved him. Ben was rescued last season but this season covered the repercussions and gave Ben one of Falling Skies’ best arcs. It became clear that he had been altered by his experience, seen with his enhanced physical skills and the psychic links he shared with aliens whenever they were nearby.

This was instrumental in one of the main arcs. It was revealed that some factions of the arachnid-like alien Skitters were rebelling against their masters and were seeking help from the humans. Tom and others had to overcome their mistrust of the rebel Skitters and while some of the show’s plots moved along a bit too fast, this one had the right pace. This helped viewers to see that things weren’t black and white when it came to the aliens who conquered Earth.

So what waited for them in Charleston? Supposedly the city was the new capitol of the United States with a working government and armed military. More importantly to the beleaguered 2nd Mass., the city offered the promise of a return to normalcy: hot showers, meals and safety. In the penultimate show of the season, “The Price Of Greatness”, they discover that the city had moved underground, leaving behind ruins to throw the aliens off their tracks. Despite a warm welcoming and comforts, things weren’t so great in the underground city. Our heroes were caught between Tom’s old mentor (Terry O’Quinn), the civilian leader, who basically wanted to remain hidden from the aliens and the General Bressler (Matt Frewer), who wanted to go after the aliens. By that episode’s end, the military initiated a coup but that didn’t solve anything.

The final episode of the season had the 2nd Mass. undertaking a covert mission to assassinate an alien Overlord and destroy a cobbled-together installation. There was genuine tension, 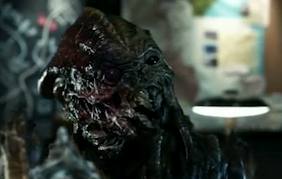 excitement, deaths and new developments to carry over to the third season. The acting and character development was very well done, it even made viewers feel for an inhuman rebel Skitter when it was killed. That alien never spoke and was quite hideous, but anyone would’ve felt its plight as it desperately tried to fight its alien enemies.

There are many questions unanswered in the show, chiefly, what do the aliens want with Earth? By the end of “A More Perfect Union” it seems as if the aliens are at war with another alien race, but it’s unknown if the new aliens can be counted as allies. Falling Skies gave viewers enough bait to entice them to keep watching.

Many second seasons for shows are make or break in terms of quality. Luckily for Falling Skies, it has found its bearings in the second season and like any worthwhile TV show leaves viewers eager for new episodes and new seasons.