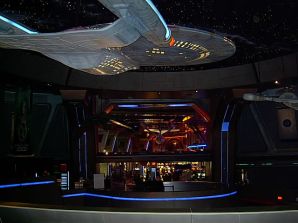 Theme parks are in a constantly competing with each other with new rides and attractions. Some of the most successful ones are those based on popular science fiction properties. As fans know, Star Wars and Star Trek have taken part in these so-called theme park wars.

One of Disney’s greatest rides is Star Tours based on the Star Wars films. It is located in Disneyland, Disney’s Hollywood Studios, Disneyland Paris and Tokyo Disneyland. It was recently given a major facelift by adding new 3D adventures and is now open in the first three parks.

The original Star Tours took place in the Star Wars Universe shortly after the events of Return Of The Jedi. Star Tours was a galactic tour company that offered rides with their fleet of StarSpeeder 3000s. Riders entered a building whose architecture resembled one from the Star Wars films. Inside was a large queue area/spaceport that featured a full-scale mockup of a StarSpeeder 3000. R2-D2 was mounted on top of the vessel and an audio-animatronic version of C-3PO could also be seen in this area. The audio-animatronics of these robots were very well done and looked authentic.

The trip was supposed to take riders to Endor’s moon. However, once onboard the craft, which was a simulator, the pilot droid RX-24 (voiced by Paul Reubens) overshot the moon. The ship and riders wound up in a couple of cosmic misadventures, culminating in a crossfire between Rebel X-Wing fighters and TIE fighters around another Death Star.

It was a fun ride and an instant hit when it opened in Disneyland in 1987. However as with all rides, it grew stale for many veteran riders. Other more elaborate simulator rides came out afterwards that amped up the thrills and effects. Still this ride remained a popular mainstay in the parks.

Eventually George Lucas and Disney decided to upgrade the rides. The storyline was changed and new films were produced in 3D. The new version called Star Tours: The Adventures Continue  (unofficially called Star Tours 2.0) emphasized the fact that it now features several different scenarios for riders. It made its debut in Disney’s Hollywood Studios on May 2011 and opened a bit later in the other parks. This ride now takes place in 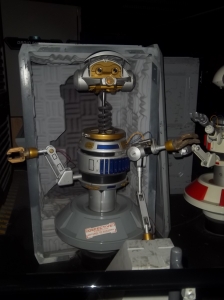 between Episodes III and IV.  While R2-D2 plays the same role in the new version, C-3PO has a larger role as an accidental pilot inside the spaceship. The queue area remains largely the same but is enhanced with large video screens featuring shots of different worlds seen in the Star Wars films. Plus, the re-named StarSpeeder 1000 is now painted with red highlights. RX-24 can also be spotted in the queue as a defective droid.

In the new plotline, Imperial stormtroopers, sometimes led by Darth Vader, attempt to board the StarSpeeder 1000 because one of the riders (randomly chosen and shown on a monitor) is actually a Rebel spy. After escaping, riders go onto two distinct destinations and receive a holographic message from either Admiral Ackbar, Yoda or Princess Leia to deliver the spy to safety.

Destinations include Tatooine, Kashyyyk, and Hoth. What riders experience is completely random and each ride feels new. All in all, there are about 54 different scenarios that can be experienced. This is a great innovation since it keeps the ride fresh and the effects are pure, jaw-dropping eye candy. Even the Naboo scenes with the Gungans and Jar Jar Binks are entertaining.. The new version was an immediate hit. Excited fans rode it over and over again and is building a solid following. 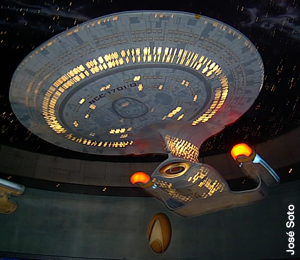 Open from 1998 to 2008, Star Trek: The Experience operated in the Las Vegas Hilton as a mini-theme park inside the hotel. The signature attraction there was Klingon Encounter. Saying it was the only ride in the Experience before BORG Invasion 4D opened in 2004 was inaccurate because guests could still enjoy the Star Trek museum (part of the queue line before the ride) and cavorting at Quark’s Bar. Those were attractions in their own right.

The Klingon Encounter ride started off as any typical simulator ride. Guests would line up in rows behind closed doors and received boarding instructions via video. But the ride took things a step further and fully immersed guests into the Star Trek Universe. A power blackout plunged the room into darkness. Before anyone could react, strobe lights pierced the pitch blackness and then the lights came back on, revealing a transporter room of the Enterprise D complete with uniformed Starfleet personnel!

The dumbfounded guests were led to an elevator which took them to a perfect recreation of the starship’s iconic bridge. The consoles and stations had the same exact Okudagrams that eagle-eye viewers noticed on DVDs. Commander Riker then appeared on the bridge’s main viewscreen and informed guests that they were transported into the future because some renegade Klingons wanted to capture one of the guests who is related to a certain starship captain. Then the guests left for the Enterprise’s hangar bay and boarded a Starfleet shuttle piloted by Geordi La Forge. The shuttle was the simulator ride. Onboard, riders faced off against pursuing Klingon Birds of Prey before traveling back to Las Vegas.

The entire ride was captivating, helped by the flawless recreation of the starship’s interiors and the actors who stayed in character throughout their performances. It all helped sell the illusion that modern-day guests time traveled into the future.

BORG Invasion 4D did a similar immersion but it wasn’t as involved or shocking as the Klingon Encounter. This time, guests simply visited a Starfleet science station with actors portraying Starfleet officers. The station’s monitors featured the holographic doctor from Star Trek: Voyager. Before long, the station comes under attack by the Borg (with an actual Borg drone invading the station) and guests were evacuated to a theater that doubled as an escape craft. The vessel’s 3D viewscreen showed an immense Borg Cube that captured the vessel. Inside the Cube, the Borg Queen appeared and attempted to assimilate the guests. At this point, effects like wind, fog and tactile sensations were used to create the impression of a Borg attack. Luckily the Voyager commanded by Kathryn Janeway showed up (seen on side monitors) to save the day.

Comparing the two universes gets a bit tricky when it comes to these rides. Star Tours had been truly innovative in terms of the special effects and the attraction’s decor. The effects were about equal to those seen on both Star Trek rides. However, as time went by, the ride itself felt dated and needed some updating. Also the film wasn’t as long as Klingon Encounter. That all changed obviously when it was upgraded.

The 3D on Star Tours 2.0 is incredible and adds to the illusion that a rider is really onboard a runaway StarSpeeder. What helps the illusion are some scenes where characters collide with the screen (one has Chewbacca leaving behind slimy paw prints on the ride’s main screen after he lands on it!). However, it doesn’t provide the wind and fog effects experienced on the Borg attraction. It’s understandable because the Borg movie takes place in a theater that can supply extra effects; it may be too impractical to do so with the Star Tours simulators. 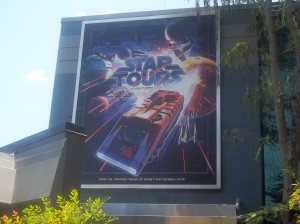 Star Tours: The Adventure Continues has an advantage with its various scenarios that give riders a different experience each time. For a normal person vacationing, there may not be enough time to experience all the combinations. Some may complain that the ride covers the worlds seen in the maligned prequels but such prejudices should be put aside. The effects and the sensations make riders forget about the prequels’ faults. The frenetic pod race sequence during the Tatooine segment was exhilarating, much more than in Episode I.

Even though the Star Trek rides are older and no longer exist it doesn’t mean that they are inferior. Actually Klingon Encounter was superior to both versions of Star Tours. Here’s the main reason: Klingon Encounter went the extra mile to make guests feel as if they actually stepped into the Star Trek Universe. Riders were abruptly transported onto a lovingly recreated starship interior with actors who did their jobs and performed as Starfleet officers that interacted with ordinary people. 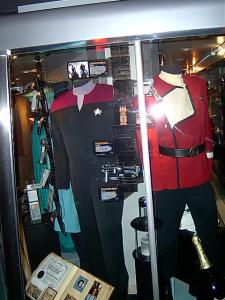 It was like being part of a lost episode. This immersion was even felt in BORG Invasion 4D (to a lesser extent), Quark’s Bar and throughout The Experience as aliens like Ferengi, Borg, and Klingons walked around and interacted with guests. This doesn’t happen with Star Tours. The workers there don’t behave as if they’re in the Star Wars Universe, they’re just your average Disney worker who tell people where to line up and mutter “May the force be with you.”

The only time visitors can feel as if they’re in the Star Wars Universe is by participating in the side attraction Jedi Training Academy. It’s a live show for children ages four to twelve. The music and sound add to the fun especially when Darth Vader and other villains appear and the young Padawans have to duel with the Sith Lord. Don’t worry, a Jedi Master instructs the kids on how to handle their mock-up lightsabers while confronting Vader. Although it’s fun to watch, only children can participate, so sorry, older fans can’t be play.

George Lucas and Disney can learn a lesson from Star Trek: The Experience on how to bring the Star Wars universe to life. The potential is there, but various factors keep Star Tours from being like The Experience. One is cost; allegedly it took a long time to upgrade Star Tours because of disagreements that Lucas and Disney had with each other; also who will foot the bill for expansion? How much will each party profit? How much control will Lucas have to protect the integrity of his property? Then comes logistics and space. Although there seems to be plenty of areas in Disney’s Hollywood Studios where Star Tours can expand into, that may be harder to do in the other parks. But Disney should note that Universal’s Islands Of Adventure are doing astronomically well with their Harry Potter land, plus Disney itself is slated to carve out a section of Disney’s Animal Kingdom to create an Avatar land.

One thing that Star Trek: The Experience showed is the difficulty of trying to run a mini-theme park. The Experience closed due to declining attendance and sales. Maybe if it was part of Universal or Disney, it would still be around. Unfortunately, the only way a fan can experience Star Trek in a park is to wait until the announced Star Trek-themed park in Jordan is developed and built. It’s doubtful that many will make that effort to go because of the distance and location. Disney and Universal do so well because the regions they are in are popular, family-friendly tourist destinations. In that regard, the people behind Star Trek can draw from Star Wars on creating an enduring theme park ride.

Article and images by José Soto