Usually, theme park wars are between two different theme park companies. In this case, however, the theme park war is within the same company: Universal Parks & Resorts. The contenders are two of its rides: The Amazing Adventures Of Spider-Man and Transformers: The Ride-3D.

The former ride debuted in Universal Studios’ Islands of Adventure theme park in Orlando back in 1999. It featured a revolutionary ride system that was part dark ride, part simulator that was developed by Universal Creative with vehicles developed by Oceaneering International. That system was so unique and kinetic that it wasn’t a surprise that the Spider-Man ride is still one of the most popular rides in any theme park.

The Scoop On Spider-Man

In The Amazing Adventures Of Spider-Man, riders donning 3D glasses board a vehicle called the Scoop that is used by the Daily Bugle newspaper company for newsgathering. Peter Parker’s (Spider-Man) boss J. Jonah Jameson assigns riders to board the Scoop to cover a breaking story concerning Doctor Octopus. The mad scientist is using an anti-gravity cannon to steal the Statue of Liberty with the help of other supervillains (Electro, Hobgoblin, Scream and Hydro-Man).

As these ride stories go, the Scoop and its passengers wind up getting caught in the melee between them and Spider-Man. Along the way, the riders are made to feel as if they’re actually in the pages of an animated comic book with huge screens that project 3D images as the vehicle constantly swerves wildly from scene to scene. Adding to the intensity of the experience are practical effects used that immerses riders into the adventure. The best example of that is where at one point Spider-Man is fighting with the Hobgoblin. First riders witness a large-screen 3D fight by a New York bridge between the two and the Hobgoblin tries to lob pumpkin bombs at the Scoop vehicle. Spider-Man catches one bomb and hurls it away before it can do any harm. But the Hobgoblin manages to throw one that explodes very close to the vehicle. Through the clever use of effects, actual flame erupts from part of a nearby wall which simulates the exploding bomb. The real heat from the blast makes elated riders feel like they’re part of the story.

It’s because of these immersions that the Spider-Man ride has remained so popular for so many years. Recently, the ride received an HD upgrade to make the 3D images sharper and more colorful. Part of that upgrade included slight changes to the characters, especially Spider-Man and Doctor Octopus who more resemble their cinematic counterparts. In addition, iconic comic book creator Stan Lee makes a few cameos in the ride itself as assorted civilians.

The ride format from The Amazing Adventures Of Spider-Man was a unique hybrid that combined motion simulators, practical effects and 3D images into a wild dark ride. It’s so well thought of and successful, that it was only natural that Universal Studios would repeat the formula for another ride.

The ride follows the storyline and characters of the film series, where the good Autobots are allied with the people of Earth against the evil Decepticons. As with the movies, both robotic groups are after their MacGuffin, the AllSpark, a cube-like object that can bring ordinary mechanical and electronic objects to life. One of the Autobots called Evac first has to retrieve the AllSpark from Decepticons who have stolen it. Then after recovering the AllSpark, it’s up to him to protect the object while Decepticons like Megatron and Starscream pursue him throughout a city. Being that riders are inside of Evac, who is the ride used in the attraction, they’re given front-row access to Evac’s efforts to safeguard the AllSpark from evil Decepticons. Good Autobots like Optimus Prime and Bumblebee aid Evac in his journey throughout the chaotic cityscape.

As the Evac vehicle zigzags throughout a city landscape to evade his enemies, the constant pitching, and jerking motions of the ride make the riders feel as if they’re actually being tossed about in the vehicle. Selling this illusion are the 3D effects from  large screens featuring gargantuan Transformers fights and the rough simulator motions from the vehicle. It can be said that being inside the Evac vehicle can be compared to being inside a vehicle that is undergoing a violent accident.

Transformers: The Ride-3D is a thrilling and exciting experience that can be physically jarring. So how does it compare to the Spider-Man ride? Well in many ways it follows the same pattern. The vehicles violently swerve from 3D scene to 3D scene as the storylines play out. Both rides also have very similar endings. In the Transformers ride, it seems as if the vehicle is undergoing freefall but is caught at the last minute by Bumblebee before hitting the ground. Fans of the Spider-Man ride know all too well that their ride ends the same way except the Scoop is caught by Spidey’s webbing.

One thing that the Spider-Man ride has over the Transformers is that it involves more use of practical effects. That would include the actual fireball that is supposed to be the Hobgoblin’s exploding bomb. Other instances include moving building parts that simulate the sensation of being raised several stories high after being hit by an anti-gravity ray, being sprinkled with water and literally feeling the heat emanating from one of Doc Octopus’ tentacles. Sure, Transformers: The Ride-3D has its share of practical effects, but they’re not as obvious or clever. Therefore the Spider-Man ride is more immersive and involving whereas the Transformers ride feels more like you’re watching your typical busy Michael Bay movie while your seat tosses you about. That’s great if you love the noisy and headache-inducing Bay Transformers movies. For everyone else, the ride can be too raucous and visually grating to really enjoy it. 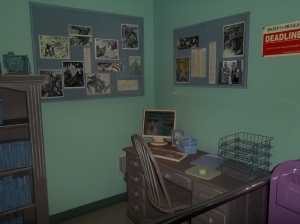 The setting for both rides are completely different from each other. The Spider-Man ride is inside a colorful facade of the Daily Bugle building. Riders on the line go through a comic book version of a newspaper company. Along the way, small monitors and large screens show an animated cartoon done circa 1990s that introduces riders to Spider-Man’s alter ego Peter Parker, who works at the Bugle. The cartoon also features his cantankerous boss J. Jonah Jameson, and newsreel footage of the villains. While the cartoon is a bit crude and dated by today’s standards, the rest of the queue is a visual treat for comic book fans. Before and after the ride, park goers have the opportunity to have their pictures taken with Spider-Man, who is quite friendly, near the ride along with other Marvel superheroes and villains.

As for Transformers: The Ride-3D, it takes place in a fairly non-descript grey building labeled the 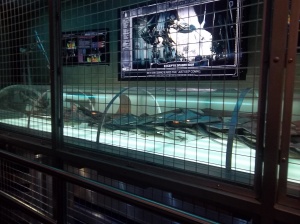 NEST and the pre-queue area is in a standard industrial building adorned with concrete walls and HD screens featuring the humans seen in the movies, as well as the robots. A few props including the AllSpark are on display throughout the queue. Outside, park goers can take souvenir photos with astonishing replicas of the Transformers robots (Optimus Prime, Bumblebee and Megatron) that tower several feet taller than the average person and actually move and speak. Obviously, they’re just performers on stilts and well-detailed outfits, but they’re very impressive.

The Amazing Adventures Of Spider-Man has an advantage in that it’s by now a beloved attraction that has stood the test the time. It’s well noted for being so innovative and memorable. However, in the Transformers defense, that ride is very popular at Universal Studios with long lines and enthusiastic reactions from riders. It’s undeniably one of the best attractions at Universal Studios. So it can stand the test of time as with the Spider-Man ride.

Even if you’re not a fan of either intellectual property the rides are worth experiencing. Basically, if you enjoyed one ride then you should enjoy the other, but speaking for myself I prefer Spider-Man.