First of all, anyone who is reading hasn’t seen Avengers: Age of Ultron should stop reading and see the film because some spoilers from that film will be covered. With that warning out of the way, let’s go over the ramifications of the newly released film.

Just like Captain America: The Winter Soldier, Avengers: Age of Ultron has proven to be a pivotal film in the ever-growing Marvel Cinematic Universe (MCU). By the film’s end, the status quo of the superhero team has been irrevocably changed symbolized by a new lineup. But more importantly, the seeds for future films in the MCU have been planted or nurtured. Specifically, the next Avengers films, Avengers: Infinity War, Parts I and II, Thor: Ragnarok, Black Panther, and next year’s Captain America: Civil War.

A complaint lodged against Avengers: Age of Ultron is that it spends too much time setting up these future films, but as one of the final films in Phase Two of the MCU it needed to set up

Phase Three with its many references and subplots that weren’t intricately involved with the film’s main storyline. In fact, some have griped that more Easter eggs weren’t dropped, namely having cameos by Spider-Man, Doctor Strange, Ant-Man, and Captain Marvel (who was supposed to be briefly introduced but dropped at the last minute). In reality, the film followed the mode of modern comic books that have many references to other titles, especially during big events. But never mind these gripes, looking ahead, one can’t help getting excited by the prospect of what is to come.

After this summer’s Ant-Man, the next major event in the MCU will be the third Captain America film. It’s to be a loose adaptation of the classic comic book mini-series, Civil War, that came out last decade and forever changed the Marvel Universe. In that story, Iron Man and Captain America become bitter enemies with each other and formed factions that battled each other. It all started in the wake of a 9/11-type tragedy that had the public demanding that super-powered beings be held more accountable. This culminated in the passage of the Superhuman Registration Act and with the two heroes taking opposing viewpoints about the law and arms against one another.

Kevin Feige, the president of Marvel Studios has stated that the film won’t be a strict adaptation of the mini-series, “So this will be Civil War based off all the other films you’ve seen up to this point, particularly Winter Soldier and Age of Ultron…Something happens. It has made the governments of the world say ‘we need to have some oversight of these guys.’ It’s not about the secret identity thing, as much as it is about, overall, who reports to who.” 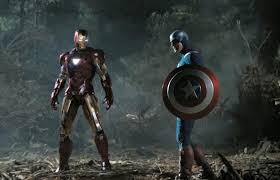 What will exactly happen? We can only speculate at this point as we wonder the following: Will the Winter Soldier be involved in some incident that leads to the Civil War? Or perhaps the film’s villain, Baron Zemo will orchestrate events to bring about chaos and the Civil War. It seems that Captain America: Civil War will be as deep and exciting as its predecessor with mature themes while delivering the big thrills. And it promises to be one of the bigger epics in the MCU.

But wouldn’t it have made more sense to make this an Avengers film instead? To have a war, one needs an army and presumably both camps will have its supporters, hence a large group of characters at least for a solo superhero film. Already, Robert Downey, Jr. will reprise his role as Iron Man/Tony Stark. It’s been announced that the film will introduce Black Panther and Spider-Man (making his MCU debut). Other featured heroes include Black Widow, Hawkeye, Falcon, Scarlet Witch, War Machine, Ant-Man and Vision. The coming film runs the risk of being too bloated with characters and a story that needs more time or additional films to satisfactorily tell its core story. But the film is in good hands with Anthony and Joe Russo directing it.

The next question is who will take sides? It’s fairly certain that Falcon will be loyal to Captain America/Steve Rogers. It’s also likely that Black Widow will join the Captain due to their bond formed across previous films. Scarlet Witch might take Rogers’ side, considering her antagonism towards Stark. As revealed in Avengers: Age of Ultron, she held him responsible for her parents’ death due to the munitions he manufactured in the past. Hawkeye could also join Rogers’ side since Hawkeye being against Iron Man would be a call back to the character’s first introduction as an Iron Man villain. Other team members could include Winter Soldier or even Spider-Man.

Who would be on Stark’s side? War Machine for one, given their long relationship. Possibly Vision since Stark was partly responsible for his creation. Who else? Perhaps Ant-Man, but that would depend on Stark’s position on the debate.

Black Panther was said to fill Spider-Man’s role in the film whereas in the comic books, the young hero was torn between sides before aligning with Captain America. But now that Spider-Man is appearing in the film, will Panther’s role remain the same? And who will he join?

For that matter what will be Rogers and Stark’s viewpoint? In the comics, Stark was pro-registration. Maybe opinions will be different with Rogers agreeing with the idea of super-powered people reporting to the government and Stark believing in free choice.

All this speculation leads to wonder about the film’s conclusion. Will the Avengers disband? Will there be a new lineup? Will Captain America suffer the same fate in the comics and be killed? Will Winter Soldier take his place as the new Captain America?

The lineup can change all it wants, but one thing to consider is that the heroes making up the team have to be popular. It’s kind of doubtful that the general public will be clamoring to see another Avengers film that doesn’t feature Captain America, Iron Man, the Hulk , etc. One way to go is have the team disband and have the third Avengers film be about the need for the team to reunite to fight a great evil. No matter what, the film will have to lead into the next Avengers film and have some kind of reference to Thanos and the Infinity Stones.

Perhaps the third Captain America film won’t be a good venue to feature the stones. It’s got much on its agenda already without having to reference the stones. So far in the MCU, there have been four Infinity Stones revealed with two remaining. Where will they appear? Maybe in Doctor Strange or the second Guardians of the Galaxy film. That sequel to last summer’s popular hit could conclude with Thanos obtaining the gems and lead to Avengers: Infinity War, Part I.

So what happens beyond Phase Three? That is impossible to say with certainty this early. By that time, veteran actors like Robert Downey, Jr., Chris Evans and others may finally call it quits. It is bound to happen, they cannot play these characters forever. Given the omniscient power of the Infinity Gauntlet, the conclusion of the Avengers: Infinity War, Part II could have the Stones remake reality. This would be a convenient way to reboot the MCU and have new actors take over the roles of Iron Man, the Hulk and others. On that note, when will we get a Hulk solo film? Based on Marvel Studios’ long-term plans with Spider-Man, Phase Four could have Spider-Man as the showcase character until it’s time to reintroduce new incarnations of MCU stalwarts.

No matter what will happen, let’s just enjoy the speculation because half the fun in anticipating the MCU films is our guesswork about them.

One comment on “Avengers: Road To Civil War & Infinity”