The new streaming show on Disney+ stars Pedro Pascal as the titular character, a mysterious bounty hunter with no name (actually he is called Mando fleetingly in one episode) who dons the same suit of high-tech armor worn by the villainous Boba Fett seen in the original films. Unlike that bounty hunter, the Mandalorian has a certain warrior code he lives by. The Mandalorian takes place five years after the events of Star Wars Episode VI: Return of the Jedi, and the Galactic Empire has fallen. It takes place in the lawless Outer Rim Territories which are rife with criminals, loners and other desperados. When The Mandalorian begins, the title character callously hunts down his prey without mercy and speaks very little as he strolls into seedy alien bars.

He is hired by a mysterious Client (Werner Herzog), once affiliated with the Empire, for an assignment to capture, dead or alive, a fifty-year-old target on another planet. After a Wild West-type shootout with guards in a remote town, the bounty hunter finds out that the target is actually a cute and adorable infant child of Jedi Master Yoda’s species. Already the Internet is flooded with images and memes of this cuddly Baby Yoda. Come on and give us the toys and plushies of this charming baby already!

The moment he encounters Baby Yoda, the Mandalorian appears to be torn over the child’s welfare. He takes to the speechless infant who already displays a great affinity with the Force. Baby Yoda is also is wanted by the Client for unknown but obvious nefarious purposes, so the bounty hunter’s protectiveness of the baby puts him at odds with the galaxy. What is so remarkable about this development and the show itself is that we never see the Mandalorian’s face, it is always hidden behind a helmet. Yet, with few words and Pascal’s subtle performance, the bounty hunter displays deep character. Maybe it’s because he sounds a lot like Clint Eastwood from those spaghetti westerns, maybe it’s because his expressionless visor forces us to read into how the bounty hunter is feeling or what he is thinking. It could be that his reluctance to allow any harm to come to Baby Yoda lets us know that he is more dimensional than the more famous Boba Fett. This is why the character and the Disney+ show itself has taken everyone by storm.

The Mandalorian exudes so many western motifs starting with its theme music that could easily fit in with The Good, The Bad and The Ugly. Or course, the characters themselves, not just the bounty hunter, were smoothly lifted from westerns while still feeling like Star Wars characters, such as Kuiil (voiced by Nick Nolte) a vapor farmer who seeks solitude in the frontier. Then there are the rustic and weathered locales that also takes us back to the original Star Wars’ frontier setting on the planet Tatooine. Other Star Wars films have tried to recapture this space western essence but none have succeeded like The Mandolorian.

Another fascinating part of the show is that we get to learn a lot about the Mandalorian culture. It is still early and unclear if the show will feature elements about Mandalorian society seen in Star Wars: The Clone Wars, but Dave Filoni, the mastermind behind the beloved animated series, directed the pilot episode and is involved with this show. Regardless, we do find out that Mandalorians have a sort of noble warrior ethic that is enigmatic. Hopefully this will be further explored in future episodes and seasons. This goes for the title character himself which we learn so little about aside from some brief flashbacks. However, it would be best if he continues to have mysterious aspects that will never be revealed.

The only issue with The Mandalorian is that the episodes to date are rather short, the second episode was only 30 minutes. But in the long run it is better the show isn’t bloated and leaves us itching for more. It does not try to reinvent the wheel and its stories are rather straightforward. But the show delivers the goods and keeps us enthralled with its grounded and rustic space western setting. Everything else from its rich and layered theatrical look, special effects, writing and acting are above par.

Watching all the space western elements of the show reminds us why we all fell in love with the franchise in the first place. After all, aren’t Han Solo, Jabba the Hutt and Boba Fett some of the franchise’s favorite characters? And the scenes taking place on the remote Tatooine some of the most famous from the films. By going full force with its space western motif, The Mandalorian could be the thing that reinvigorates the franchise. 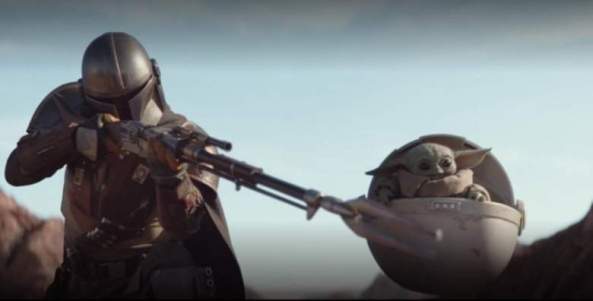 With all this going for the show, it is easy to see why The Mandalorian is not only the best offering from Disney+but the streaming app’s flagship show.