Star Wars Rebels has now finished its run and has seemingly tied up the loose ends fans were wondering about when these new characters were introduced during the series’ beginning. Specifically Jedi Knight Kanan Jarrus, and his apprentice Ezra Bridger. In the case of Kanan, his story concluded in the episode “Jedi Night” where he sacrifices himself to save his friends and destroy an imperial installation. The antepenultimate episode “A World Between Worlds” truly embraced Star Wars’ mystical side with seemingly magical wolves on Lothal aiding our heroes. Plus, Ezra transported to a nexus in time and space by using a Jedi temple mural and rescued Ahsoka Tano from her supposed end while fighting Darth Vader in the season 2 finale “Twilight of the Apprentice”.

All of this sets up the final episode “Family Reunion and Farewell”, where the remaining heroes launch a final plan to free the planet Lothal from the clutches of the Galactic Empire. Ezra Bridger faces his fears and feelings for his lost parents and withstands a final temptation by Emperor Palpatine. Ezra is also able to help his friends free his homeworld, kidnap Grand Admiral Thrawn and disappear with him into parts unknown by using interstellar space whales that can travel in hyperspace. Yes, you read that right. The epilogue is very interesting in that it shows the other characters fans have come to know and love surviving the Galactic Civil War. General Hera Syndulla had Kanan’s child and took part in the Battle of Endor, as did Zeb Orellios, Rex and Sabine Wren. Sabine herself states in the episode’s final moments that Ezra is still alive and out there somewhere, and along with Ahsoka, they both set out to look for him. 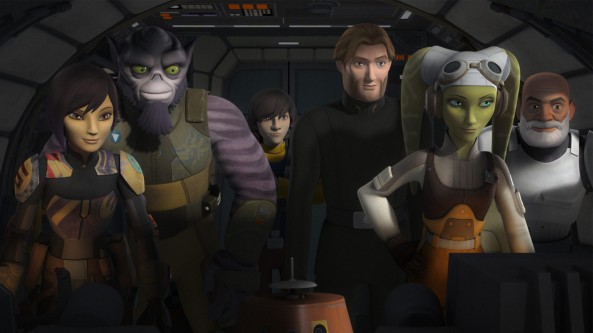 The very beginning had Ezra Bridger with a slingshot, which seemed silly and stoked fears that Rebels was just going to be just a dumbed down kids show about Star Wars, but he matured as the show went on and the relationships between the crew of the Ghost developed quite nicely, as well as their trials and tribulations as a small band of partisans trying to do good in the galaxy. “Family Reunion and Farewell” showed quite well how our heroes’ struggle against the Empire finally ended with freedom for their homeworld. Also, the Rebellion finally took a stand against the Empire, and the fight for freedom truly starting to take shape.

The show added quite a lot to the lore of Star Wars by showing the origins of such varied things like the B-Wing fighter, Mon Mothma and Senator Bail Organa organizing the beginnings of the Rebel Alliance, Princess Leia and Lando Calrissian in early adventures with the show’s characters, bringing fan favorite Grand Admiral Thrawn out of the Heir To The Empire books, and Obi-Wan Kenobi and Darth Maul having a final confrontation on Tatooine. It also gave something of a conclusion to Star Wars: The Clone Wars, (something the show was denied when it was canceled by Disney) by having Ahsoka’s fate revealed and with her confrontation with  her former master. 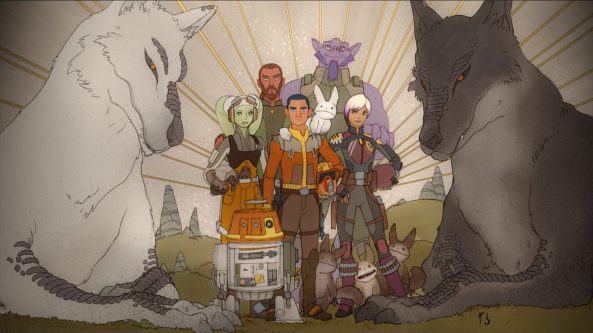 The two shows are linked in this way obviously due to the involvement of Filoni who oversaw both series and is now in charge of overseeing all of the Lucasfilm animation projects. This bodes well for the future of Star Wars shows, since he was able to maintain a high-quality storytelling throughout the run of both Star Wars Rebels and Star Wars: The Clone Wars and hopefully will be able to continue this when the next eventual animated show comes along. I have a feeling that this next series will take place between the original and sequel trilogies and bridge the gap between Return of the Jedi and The Force Awakens. A clue indicating this is that Lucasfilm has trademarked the title Star Wars Resistance. I trust that Filoni will be able to bring new and interesting ideas to the new era of Star Wars; something that is needed. But regardless, the legacy of Star Wars Rebels has been set with its emphasis on a crew who became a family, struggling and fighting against seemingly impossible odds and finally overcoming everything and helping to defeat the imperial juggernaut. Not bad for a kids show on Disney XD.