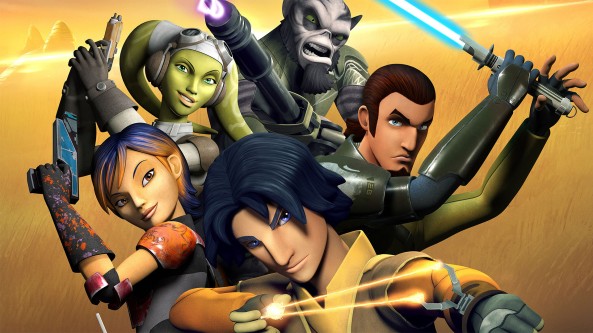 Star Wars is back with the long awaited premiere of the pilot for the animated show Star Wars: Rebels on Disney Channel.

Right off the bat the action kicks off with the introduction of the main character, a Jedi in hiding called Kanan Jarrus (voiced by Freddie Prinze, Jr.), who leads a crew of rebels on a ship called the Ghost in stealing weapons on a remote outer rim world Lothal. On the planet the crew encounters a young thief named Ezra (voiced by Taylor Gray), who is also strong in the Force.  This sets off a chain of events that lead them on a rescue mission to free wookie slaves on the spice world of Kessel. The show displays classic Star Wars action with a speeder chase right out of Return Of The Jedi, gun battles with imperial stormtroopers, who still have lousy aim, and dog fights in outer space with the iconic TIE fighters echoing scenes from A New Hope.

All of this sets up the series nicely as a return to the Original Trilogy era, as this show is set between events in Star Wars Episode III: Revenge of the Sith and the original film Star Wars Episode IV: A New Hope.  The tyranny of the Empire is on display as well, the episode starts with an agent from the Imperial Security Bureau harassing citizens of the planet Lothal, and later wookies are being shipped to certain death as forced slave labor. As much as I liked the prequel era and Star Wars: The Clone Wars series, it is great to see a return to this time in the Star Wars universe.  But I hada few nitpicks with the pilot episode. Take the way Kanan reveals himself as a Jedi to the imperial forces in the end of the episode. It did seem somewhat sudden, as was the quickness that Ezra accepts Kanan’s offer to be trained as a Jedi. 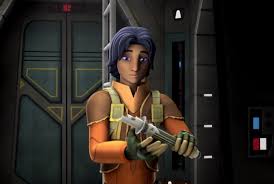 I thought that their identity as Force sensitive people would have been kept under wraps for a while and be gradually brought up as the series went on, but by the conclusion of the pilot, they basically lay their cards out on the table. This brings them to the attention of the next big Star Wars villain, the Inquisitor, who seems like a sinister character even though his screen time is only a few seconds. Having said that, it was nice to see some exciting lightsaber action, as was seeing our heroes help their fellow man. Whether it was feeding starving outcasts on Lothar or helping Wookie slaves escape from Imperial clutches.

This series is being executive produced by Dave Filoni, who oversaw the excellent Clone Wars  show and it will be interesting to see how Rebels develops in comparison. Star Wars: The Clone Wars had familiar characters and settings while Star Wars: Rebels is kind of in new territory with new characters (and a cameo by one of the beloved Star Wars characters) and a setting that has to bridge the gap between the trilogies.   Overall, this pilot gets the series off to a good start. The characters seem to have a good rapport with each other and have a history as a crew that will hopefully be explored in the coming episodes. It will be fun to see how they will fit into the overall story of the rebellion and hopefully we will see classic Star Wars characters interacting with the crew of the Ghost.