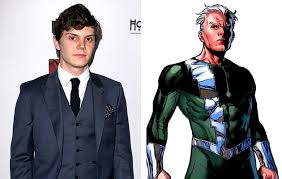 There has been a bit of a combination of both a cold and civil war when it comes to movies based on Marvel Comics characters. But lately things are heating up between movie studios and that’s best seen with the character of Quicksilver, the mutant superhero with superfast powers who is slated to appear in two competing movies: X-Men: Days Of Futures Past and The Avengers 2.

Here’s the background: before Marvel was acquired by The Walt Disney Company, Marvel sold the rights to many of its popular characters to different movie studios like 20th Century Fox and Sony Pictures, who co-produced them with Marvel Studios. That was the main reason characters didn’t crossover into other films. For example, in the Spider-Man films, you wouldn’t see a shot of Thor flying by the Daily Bugle’s windows.

Over time, Marvel Studios began regaining the rights to several characters, most notably the Hulk and Daredevil. These efforts kicked up into high gear after Disney acquired Marvel. The few remaining characters Marvel Studios doesn’t have the film rights to are Spider-Man, the Fantastic Four and the X-Men.

Trying to get the X-Men characters will be a big problem, which is why Marvel seemed content to let Fox continue making X-Men films. That was until director Bryan Singer’s announcement last week. As the director of the upcoming X-Men: Days Of Futures Past, Bryan Singer stated that he had cast Evan Peters to play Quicksilver for the movie. Fans were excited with this idea, mainly because Joss Whedon announced weeks earlier that the same character will be in the sequel to his blockbuster hit The Avengers.

At first, it seemed as if this was to be some kind of crossover between the two film franchises but no so fast. Both studios are denying this is an attempted crossover. In fact, while Peters will play Quicksilver in X-Men: Days Of Futures Past, Joss Whedon, after confirming last week that Quicksilver will appear in The Avengers 2, said that he is still casting the role. If any of the two announcements were meant for the other side to blink, well it didn’t work. So the feeling for now is that both studios will just have to share Quicksilver.

The reason for the ability of both studios to use Quicksilver is that while Fox owns the X-Men film rights, Marvel does have the right to use Quicksilver and his sister, the Scarlet Witch, in their films just as long as there isn’t any mention that they are X-Men foe Magneto’s children. Meanwhile, in the X-Men films it cannot be stated that the mutant siblings are members of the Avengers (as is the case in the comic books).

This is a real treat for fans who clamor at the idea of a shared universe of all the Marvel characters. They can enjoy two different incarnations of the same character and imagine that both films take place in different time periods. For now, a completely shared cinematic universe is impossible but this casting conundrum brings that dream one step closer to reality.