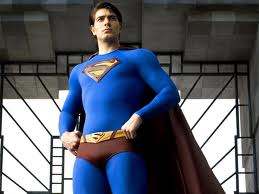 For decades, the Last Son of Krypton has appeared in non-comic book media like books, cartoons, serials, and TV shows. His popularity and standing grew thanks to the film Superman in 1978. As a franchise, the Superman films experienced ups and downs ranging from epic masterpieces to the type of garbage seen in Mystery Science Theater 3000. Having viewed the films recently these are my rankings for the Superman movies.

1. Superman (1978): This film has stood the test of time and become a genuine classic. There have been many superhero films that have come since this one, but it still holds up today in spite of its dated special effects and other drawbacks.

Superman has a sense of awe and majesty in some moments, namely, the first acts in the planet Krypton and Smallville. At times some scenes in Superman’s hometown seem taken out of a Rockwell painting. It’s these quieter moments that lend an ambience to what we are watching.

Once Superman grows up and moves to Metropolis, the movie becomes a hybrid of a romance, light comedy and adventure yarn. At these points, Superman/Clark Kent encounters colorful types like his love Lois Lane (Margot Kidder) and nemesis Lex Luthor (Gene Hackman), who is both an amusing and devious foe.

More than an origin story about Clark Kent growing up to be Earth’s greatest superhero, Superman is a loving ode to classic Silver Age comic books. Thanks goes to director Richard Donner’s respect for the source material and Christopher Reeve’s masterful performance as Superman/Clark Kent. 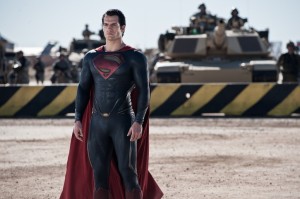 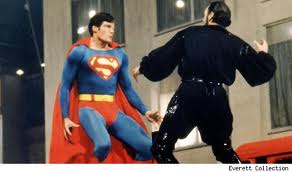 2. TIE: Superman II (1981)/Man Of Steel (2013): I couldn’t decide which of the two films is greater. They both have their strengths and weaknesses, but they’re so different in style and execution. So determining which is better depends on the viewer’s taste and preference.

Superman II is very exciting and captivating with an engaging story. Kryptonian criminals come to Earth and create havoc while Superman, unaware of their activities, gives up his powers to be with Lois Lane. As fun as it is, Superman II unfortunately is littered with plot holes and conveniences.

For starters, how is it that Luthor gains entry into Superman’s Fortress of Solitude (some security!). How come Superman never learns about this? More importantly why is he so clueless about Zod and his cronies until after he renounces his powers? Why give up his powers? Just to dance in the sheets with Lois? Given the scope of his decision, it makes him seem kind of irresponsible and naive. Plus, the ending has an even bigger cop out than the first movie. 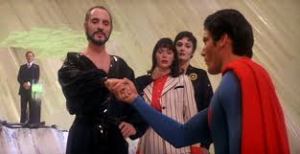 Still, the performances by Reeve and Kidder are stellar whenever they’re together on screen. Terrance Stamp, Sarah Douglas and Jack O’Halloran are formidable and vicious villains with Stamp’s Zod displaying a sense of regality and pompousness. You’re just itching for Superman and these super jerks to finally get into it during the film’s last act. The battle in Metropolis is fun and exciting, even if it lacks the scope and effects shown in Man Of Steel. However, at least Superman showed more concern for the innocent civilians caught up in the melee, unlike Man Of Steel.

Producer Christopher Nolan and director Zack Snyder reinvigorated the Superman franchise with the epic reboot Man Of Steel. It’s a no-expense-spared spectacular with jaw-dropping and exhausting battle scenes that finally showcase the scale of Superman’s powers.

Many elements about Superman and his mythos are updated and feel refreshing. Henry Cavill does a fine job playing Superman/Kal-El/Clark Kent and echoes Reeve’s earnestness and humble nature. At the same time, Cavill makes the role his own as the role emphasizes Superman’s loneliness. We feel that he is an outcast who just wants to help out and find himself.

As Superman searches for his past heritage,

General Zod (Michael Shannon) arrives on Earth his small army of evil followers with the intent of capturing Superman and transforming the Earth into a new version of Krypton. Afterwards, Superman must not only contend with Zod and a mistrustful military, but with his dual heritage. There are many terrific quiet moments when he examines his humanity.

There are so many great things about the film but it has faults. Aside from common complaints about the music, the film needed tighter editing. It’s a long movie and it feels like one. Some fights seem to go on forever, leaving you wanting the whole thing to end already. Sometimes less is more as the saying goes.

4. Superman Returns (2006): This underrated and misunderstood film is a strange mix: part sequel, part reboot. It tried to be both but failed. More or less, it takes place after the events of Superman II and wisely ignores the abominations of Superman III and IV. Superman is now played by Brandon Routh, who does a decent but understated job as the Man of Steel. As for the other actors, standouts include Kevin Spacey as Luthor and Sam Huntington as Jimmy Olsen. Kate Bosworth, however, is very unremarkable as Lois Lane and her character development impairs the film. 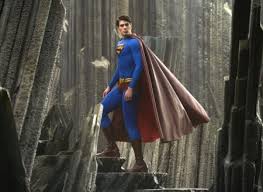 Superman returns to Earth after exploring Krypton’s ruins and finds that the world has moved on. Lois is now engaged to another man and has a child out of wedlock. Meanwhile, Luthor’s plot is just an unimaginative variation of his real-estate scheme from Superman. Boy, was that disappointing. Fans had been clamoring for years to see Superman unleashed in an action-filled epic. Instead director Bryan Singer presents a mopey, ponderous film where Superman doesn’t do a lot. There isn’t any payoff in his confrontation with Luthor and he doesn’t even get the girl.

Regardless, Superman Returns has many admirable qualities that if put with Man Of Steel might have been one of the best superhero films. In some ways it can be seen as a transitional film between the Reeve films and the new reboot. At times, the film lived up to its potential thanks to beautiful cinematography, special effects, music, etc. A great example is when Superman saves a jet liner–it still is one of the best superhero moments ever filmed.

5. Superman IV: The Quest For Peace (1987): Now we get to the truly poor Superman films. Many fans state that this is the worst Superman film, citing its overall shoddy execution. They have a point, but the next film is even worse. At least Superman IV doesn’t try to be a comedy, though it has many unintentionally funny moments. 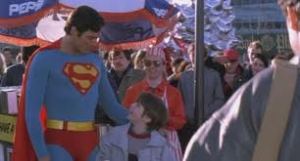 Superman decides to rid the world of all nuclear weapons. What is implausible is that all the nations comply with his disarmament. The only exceptions are by rogue military types and Lex Luthor. Gene Hackman, as always, is a great and funny Luthor, some of his put downs towards his nephew Lenny (Jon Cryer–yup, that guy Two And A Half Men) are hilarious.

From the start, the movie seemed cheesy and infantile. Reeve and veteran actors did their best but couldn’t hide the movie’s poor production values and simplistic plot. Things go way downhill when Luthor creates an evil clone of Superman called Nuclear Man 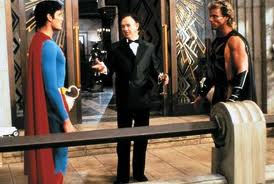 (Mark Pillow) and Superman IV devolves into Saturday morning kiddie fare at that point. The worst thing about this movie is that it would turn out to be the last time Reeve played the Man of Steel. After this fiasco, Reeve swore he was done with the role and sadly a few years later he was paralyzed and eventually passed away. No matter how bad the film was, Reeve showed he was a true professional in his work.

6. Superman III (1983): At the very bottom is this disaster. Directed by Richard Lester all by himself, he proved that his involvement in the previous Superman film was minimal given how good Superman II was when compared to this mess. What’s worse is that unlike the other films, Superman III has this cynical undertone that undermines the earnestness of Superman. 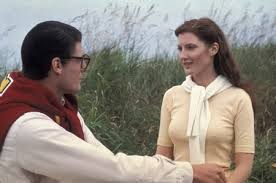 One of the very few saving graces in Superman III is Reeve’s dependable performance as Superman and Clark Kent. In this film, he goes back to his hometown and reconnects with his Lana Lang, who is very well played by Annette O’Toole. The budding romance between Clark and the down-to-earth Lana is an oasis in this turd field of a movie.

Now to the rest of the film. Like Superman IV, this one is embarrassing to watch, you feel sorry for the performers forced to read corny lines and react to the dumb plot. For some reason, the filmmakers decided to make this second sequel into a comedy. Never mind that fans had been expecting a rousing adventure like the two previous films. This might have been forgivable is the damn thing was funny. And it isn’t. What makes matters worse, is that comedian Richard Pryor is probably the most humorless person in this mess, and he’s a major character! Actually, this movie seems to be more about him than Superman. 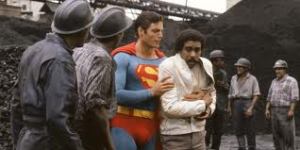 Pryor plays Gus Gorman, a down-on-his-luck loser with a knack for computers. This gets the attention of Ross Webster (Robert Vaughan), a tycoon who wants to corner the coffee market and needs to get rid of Superman to do this. When not involved in unfunny pratfalls, Gorman designs a super computer that goes out of control and a kryptonite variant that turns Superman into a vile lout. Yeah, this is a lame plot, at least Luthor’s schemes seemed fiendish. Let’s just say that Superman III is an insult to everyone.