Another Comic-Con at San Diego has come and gone, leaving many fans whetting their appetites over upcoming film releases, TV show premieres, comic books, etc. While the convention is supposed to be about comic books and related matter, the biggest news had to do with pending films and TV shows. 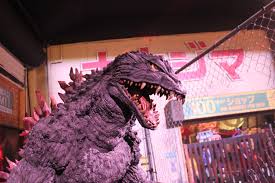 Stealing the thunder in the early days of the convention was the immersive Godzilla Experience exhibit that gave convention goers a chance to see what the aftermath of a Godzilla rampage is like. Also, fans got a look at the new design of the famous Kaiju for next year’s Godzilla. Film director Gareth Edwards promises to deliver a true Godzilla movie unlike the abomination that came out in 1998. Reports are that the footage shown at Comic-Con allegedly captured the mood of the early Godzilla films. 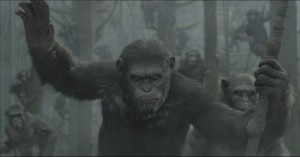 Dawn Of The Planet Of The Apes

This anticipated sequel to Rise Of The Planet Of The Apes, 2011’s successful reboot of the Apes franchise, looks mighty interesting. A special teaser was put together for Comic-Con that showed an older and angrier Caesar (mo-capped again by Andy Serkis) in his ape camp meeting with human resistance fighters. Many were excited by the tease, which presented even more realistically rendered CG apes.

The people behind the very successful TV show The Walking Dead seem to have outdone themselves. At least, that is what it looks like with the riveting trailer for the show’s fourth season. We find Rick Grimes and his group of survivors dealing with the nitty gritty of life in a post-apocalyptic world. As usual with The Walking Dead, characters apparently die as shown in the trailer and the tension and thrills seem to be in overdrive.

Many curious fans got a gripping look at thrilling and captivating clips from Alonso Cuarón’s Gravity movie. Featuring endangered astronauts played by Sandra Bullock and George Clooney, the movie looks incredible. Thanks to the clips, which showcase the director’s masterful long takes, anticipation has greatly grown for Gravity. This film was delayed from last year, but based on the clips, the wait may have been worth the delay.

J.J. Abrams’ Lost and Fringe may no longer be on the air, but his new TV offerings may make up for that. The most promising

TV show seems to be Almost Human, which had its pilot screened at Comic-Con. It stars Karl Urban as a cop whose partner is an artificial being in the near future. While the premise sounds formulaic, the pilot was very well received by those who viewed it.

The biggest news and reactions were generated by the Marvel and DC movie announcements and previews. Arguably, the most intense and joyous reaction was from the announcement that the next Superman movie will team him up with DC’s other iconic superhero, Batman.

Not to be outdone, Marvel previewed footage, props and concept art from an impressive lineup of films like The Amazing Spider-Man 2, Thor: The Dark World, Captain America: The Winter Soldier and Guardians Of The Galaxy. Along with The Amazing Spider-Man 2, two other Marvel films generated a lot of buzz. One was the sequel to The Avengers with the announcement that the evil android Ultron will be the villain. The other film is the eagerly awaited X-Men: Days Of Future Past. Aside from shown footage and anti-mutant posters plastered all over the place, the spectacle of the entire cast appearing to promote next year’s film was noteworthy.

Many comic book fans lament about the way that Comic-Con lost its focus on being about comic books. But at least, the films generating the most talk out of the convention are based on comic book properties. This illustrates how the characters in those comics have evolved past their traditional trappings into something larger.